Magician and mentalist Seth Neustein pulled off an amazing trick: He turned his passion into a full-time career.

In 2014, after six years as a project manager, the Jewish Penn Hills resident became a professional entertainer. Neustein’s new vocation didn’t come out of thin air. He’d been standing in front of a crowd and delivering the unexpected for decades.

“I was the kid who would perform at other kids’ birthday parties,” he said.

Neustein even entertained at his own bar mitzvah. Dressed in a black cape and red yarmulke, Neustein performed mentalism and magic. Afterward, to the delight of family and friends gathered at Congregation’s Beth Shalom’s ballroom, he played “Sunrise, Sunset” and “The Pink Panther Theme” on his clarinet.

“My friends teased me about being a showoff,” he said.

His performances have evolved, as has his attire — double-bridged eyeglasses have been swapped out for smaller frames, and a black tie-on cape has been replaced by a dark suits or a tuxedo — and whether it’s magic or a miracle, joked Neustein, being able to fit into formal garb after the past year is something of a marvel. 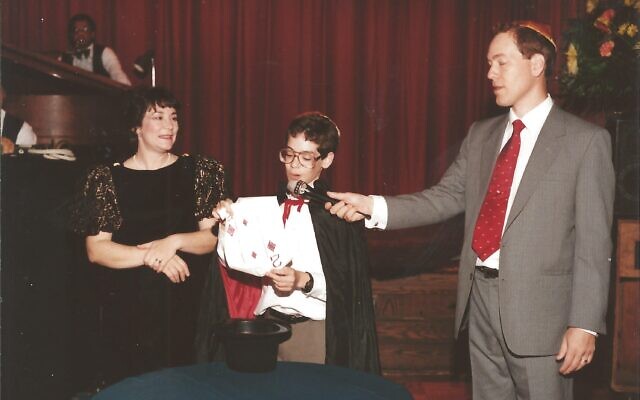 For the last 15 months, like so many other performers, Neustein’s act basically vanished. Because of canceled events, and his own health, he was largely out of commission.

“I got COVID real bad,” said Neustein. Although hospitalization wasn’t necessary, “I couldn’t walk across the house without having to lie down.”

The entertainer is now vaccinated and spent the past several weeks trying to shake the dust from his act through private performances at dinner parties and barbecues.

Many people haven’t seen live entertainment for more than a year, said Neustein, who is happy that socialization is returning and that he is able to make the audience experience both fun and safe.

One of his acts, a “speakeasy,” involves mentalism, a performance art Neustein described as “dealing with the superiority of the human mind.” Over the course of the program, participants read each other’s minds and see the future, according to Neustein.

“It’s a very innovative style of play, or epic theater,” he said. “I set up the conditions and make it possible.” Then, through conversation, “we figure out what’s going on deep in someone’s mind. It’s a very positive tour de force — I don’t reveal anything you don’t want to talk about.”

Neustein said his one-of-a-kind engagements occur in a safe environment in which only willing audience members are called upon to participate, and each performance is uplifting.

“Especially right now, when the world feels very bleak, I don’t want to contribute to any of the negativity that people feel daily, so the only person that gets made fun of is me,” he said.

The objective is always to “energize” attendees and have them walk away enthused and encouraged to accomplish whatever goals they might have, said Neustein.

Neustein himself could use a little bit of that boost. With his first major post-COVID performance set for June 12 at Steamworks Creative in Gibsonia, he is feeling a case of the jitters, he said. But after three decades of live shows, he isn’t worried about getting stage fright or negative reactions to his new material. The one cause of concern for the mentalist is one thing he can’t predict.