Charles Kachale and his family landed at the Pittsburgh International Airport on Jan. 20, 2020. Awaiting their arrival were representatives from Jewish Family and Community Services. After they exchanged greetings, JFCS sprang into action and helped the non-English speakers set up their new household in Crafton.

“They provided me with all the basic necessities,” said Kachale, a 44-year-old Congolese native.

Everything, from the roof over their heads, to the beds they slept on — even flatware and cooking utensils — was ready to make the family’s transition as smooth as possible, Kachale said.

Having lived in the Democratic Republic of the Congo their entire lives, Kachale and his family were set to begin the process of adapting to a new environment.

The hope, JFCS representatives said, was that their efforts would help Kachale’s four sons, who now range in age from 6 to 20, ease into their new lives.

But when the pandemic struck less than two months later, the Kachale boys were forced to adapt once again as their new schools moved online and in-person social interactions were paused. Their struggle mirrored that of millions of children nationwide, but was compounded by the fact that they were new to the United States. While the pandemic had a negative effect on the academic growth on children throughout the country, it was particularly hard on students of color in public schools, according to a June 2021 report by the U.S. Department of Education — in part due to the impact of disparities in access to technology — and the abrupt shift to remote learning was an additional hardship for students like the Kachales, who were only just beginning to learn English. 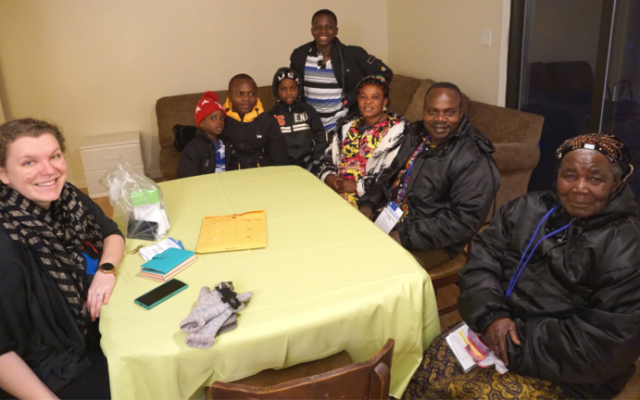 The Kachale family during their first night in the United States. Photo courtesy of JFCS

Well before COVID-19 uprooted daily life, Dana Gold, JFCS’ Chief Operating Officer, realized that JFCS’ younger clients in particular would need additional assistance. While the organization had multiple programs designed to ease an adult’s transition to a new environment, programs for children were lacking, she said.

“We all know as adults and as parents that when things are going badly for our children, they kind of go badly for the household,” Gold said. “We recognized that we needed to do more.”

So, nearly a year ago, as the pandemic raged on, JFCS created Newcomers Crew, a virtual space for children to connect, receive mentoring and practice language skills for about an hour at a time.

At first, children from both Africa and South East Asia, ranging in age from 5-19, met in the same online room, according to Joy Givens, program coordinator of Newcomers Crew. All of them had arrived in Pittsburgh within the past two years, she said, and needed additional language learning support. But having such a wide age range and kids from diverse backgrounds in one room was challenging.

And so, as the weeks went by, Givens and her colleagues changed the format to give the students an opportunity to mingle and join in some group activities, but then moving them into separate rooms online to meet with mentors. 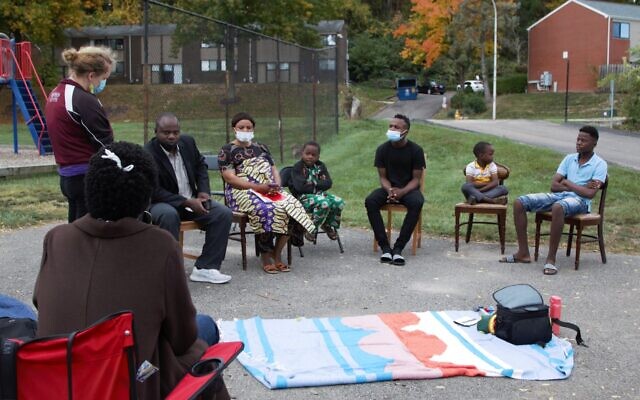 The Kachale family participates in a JFCS program. Photo courtesy of JFCS

Bloomfield resident Joe Rokicki had been volunteering with JFCS will before Newcomers Crew was developed last fall. Several factors influenced his decision to help out with the program, he said, including the amplification of political rhetoric that was creating a “hostile environment” for immigrants.

“I’m the grandson of immigrants and I wanted to give back,” he said.

Though most Newcomers Crew sessions occurred online, Rokicki also met in person with participants during gatherings at a park in Crafton Heights, and he was able to observe the kids he had worked with beginning to interact with other neighborhood children. He was particularly moved seeing a second-grader who “came out of her shell, blossomed and became the most talkative kid in the program.”

Rokicki, who plans to volunteer again when the program restarts on Sept. 21, said Newcomers Crew plays a pivotal role in welcoming kids, and it’s clear the time and effort of volunteers and staff is appreciated.

Rebecca Remson, JFCS’ director of development and communications, said Newcomers Crew, like many of JFCS’ programs, reflects the African proverb, “it takes a village to raise a child.”

There is a lot that needs to transpire both academically and socially for a child to succeed, and JFCS is trying to provide these children and families with “the tools to be on the right footing,” Remson said.

For Rokicki, JFCS couldn’t have developed Newcomers Crew at a better time; according to the United Nations, there are more than 82 million displaced people around the world. That figure represents the highest number of refugees since World War II, something that Rokicki said must be addressed.

“It’s really important to make our refugee and immigrant communities feel like they are an extension of our family and our communities,” he said. “They’re kids at the end of the day, and they need our help and all the support they can get.” PJC