D’Rae Wise stood outside the Tree of Life building for 11 minutes on Oct. 27, 2021. He did the same thing last year, and the year before.

Wise, a Shadyside resident who didn’t know any of the 11 Jews murdered on Oct. 27, 2018, said returning to the corner of Shady and Wilkins avenues is a chance to remember life’s fragility and the responsibilities we share.

“Your life can be taken, any day at any point,” Wise said. “Life is short and we have to grow like a tree and just be good people.”

Traveling to the building and standing silently outside for 11 minutes isn’t particularly remarkable, he said.

He wishes more people did so.

“Everyone in the community, whether I know them or not, matters,” Wise said. “We're a big part of making our city and our community strong.”

Since 2019, Madeline Ellgass has traveled on Oct. 27 from her Mt. Washington home to the corner of Shady and Wilkins to deposit flowers. This year, she left a bouquet of orange roses near Tree of Life’s temporary fence. She was hoping to bring yellow flowers, she said, because yellow is a “bright, uplifting color,” but orange was the best she could do.

But Ellgass — whose middle name is Rose — knows the flowers’ hue and species don’t matter.

Bringing flowers is “just something small for me to feel like I can acknowledge what happened here,” she said. “I think it brings me some peace in knowing that, as a community, a lot of people come together today.”

Throughout Oct. 27, 2021, individuals and groups arrived at the Tree of Life building. Before 9 a.m., mental health professionals set up a tent south of the building, where until 3 p.m. representatives of Jewish Family and Community Services, Center for Victims and the 10.27 Healing Partnership greeted visitors and offered space for listening and healing. 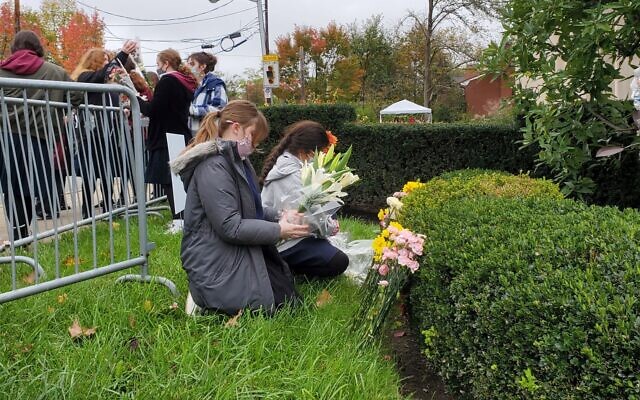 At 9:54 a.m. — a time when Mayor William Peduto asked the city to “hold a moment of silence and reflection” — members of the Mallinger family quietly stood near the Tree of Life building. Their matriarch, Rose Mallinger, was one of the 11 people murdered during the attack. Her daughter, Andrea Wedner, was shot and seriously injured.

Bayla Fishman, a Yeshiva Schools graduate and current programming manager at the school, said the students’ response to the murder of 11 Jews is driven by a teaching of the late Lubavitcher Rebbe, Rabbi Menachem Mendel Schneerson, who believed that “in order to dispel darkness we have to bring kindness.”

Along with encouraging fellow visitors to appreciate and acknowledge the good in others, and to volunteer at nonprofits, Fishman and the Yeshiva students handed out Shabbat candles.

Lighting the wicks each Friday night is an easy way to eliminate darkness, the students said. 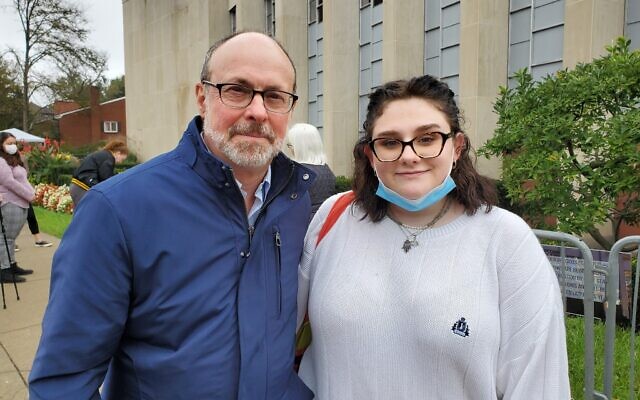 Around 10:45 a.m., Delilah Hollander arrived with nearly 20 classmates and administrators from Chatham University.

Hollander, a Chatham University freshman and a member of Congregation Dor Hadash — one of the three congregations attacked — said she was in Israel last year on Oct. 27, and instead of feeling “alone” again, she wanted to assemble a group, on site, focused on remembering the lives that were lost.

Hollander briefly recounted her memories of each person killed — anecdotes that transpired during services, in the hallways or at kiddush on Saturday mornings.

“I don’t pretend to speak for any other person from Dor Hadash, or our sister congregations, Tree of Life and New Light, but I know that I will never forget the lives these people lived. I will never stop honoring their lives, and I implore each and every single one of you to remember them. But more than that, remember your life, your community, the people around you, and the world we live in as a thing to be celebrated.”

Hundreds of people stopped by the corner of Shady and Wilkins avenues throughout the day, with many finding comfort at the nearby tent, where therapists and canine advocates stood ready to welcome passersby.

Alliyah Kimbrough and Stephanie Rodriguez, both from UpStreet Pittsburgh, a teen mental health program of JFCS, said some people wanted to talk, while others enjoyed petting the dogs. One woman showed up on a bike and left cookies that she said Jerry Rabinowitz would have liked.

People seemed grateful, Rodriguez said, that someone was there to support them. 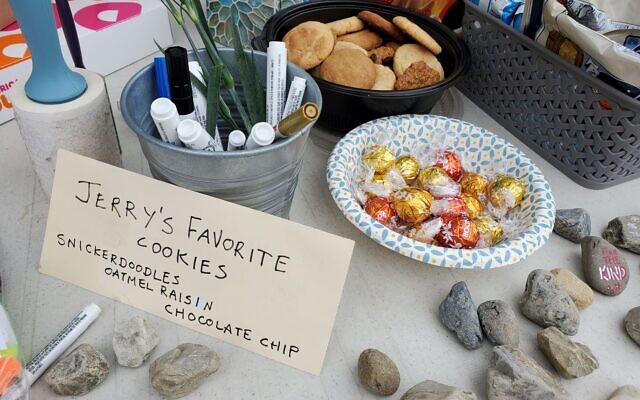 Items available inside a nearby comfort tent. Photo by Adam Reinherz

Around 1:30 p.m. almost 50 middle and high school students from Hillel Academy of Pittsburgh arrived at the Tree of Life building to recite Psalms.

What happened there three years ago is very much “a part of their history,” said Rabbi Yisroel Smith, an assistant principal at the school. “It’s important for the students to come here and reflect on the people who died and the event.”

Although most of the teenagers were in Pittsburgh on Oct. 27, 2018, two members of the group were not: Israeli natives Ruth Goren and Efrat Schusshein arrived in Pittsburgh a few weeks ago to serve a year of voluntary national service.

Neither Goren nor Schusshein had come to the corner of Wilkins and Shady prior to Oct. 27, 2021. Standing there helped them appreciate the city they’d heard so much about prior to their arrival.

“Being here makes us feel connected to the whole community of Pittsburgh,” Goren said.

Schusshein said she got the feeling that people wanted “to be together and support each other.” 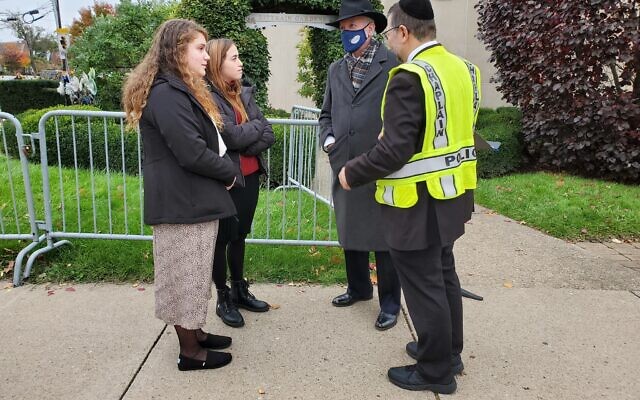 Barb Feige, Tree of Life’s executive director, said that throughout the day several people walked by and left mementos. Others signed the guest book or offered a kind word to people standing nearby. Many individuals drove by and offered acknowledgement by honking or waving from their cars.

Whereas the first year after the attack felt very traumatic, and the second year was largely dictated by the pandemic, this year people seemed to be developing more of a routine in how they approach the day or the building, Feige said.

“There's a lot of us who are still grieving in our own ways, and healing isn't a straight path,” she said. She thinks people are beginning to figure out for themselves “what they need to do to heal.”

Tree of Life was there to help with that, having people on site ready to listen, Feige explained, because as much as the congregation is committed to honoring the victims, the focus is also on supporting the community.