During his deployment, at the height of the War in Afghanistan, Lt. Col. JJ Johnson discovered a place of respite. Located inside a nondescript building run by the chapel, Jack’s Place was an air-conditioned room with comfortable chairs and free Wi-Fi. Spaces like these weren’t easy for American troops — who were either deploying to and from Afghanistan — to come by.

The room was a place for relaxation, recalled Johnson, now an Air Force intelligence officer and legislative fellow at the U.S. House of Representatives. But it also housed constant reminders of appreciation for the daily sacrifices being made by the troops and their families.

It was “loaded to the gills with care packages,” said Johnson, who ended up volunteering at Jack’s Place during his deployment.

Those packages, sent to military personnel by both family members and strangers from across the United States, contained cookies and gifts, and — most importantly to Johnson — cards. Written largely by strangers and illustrated by children, the notes extended holiday greetings, birthday wishes and statements of gratitude.

While supervising Jack’s Place as a volunteer, Johnson prominently displayed the cards, which, he said, were critical for soldiers’ morale.

“When you are a military member your whole life is on your back — literally on your back,” Johnson said. “You feel alone so much.” Seeing cards from around the world “makes all the difference.” 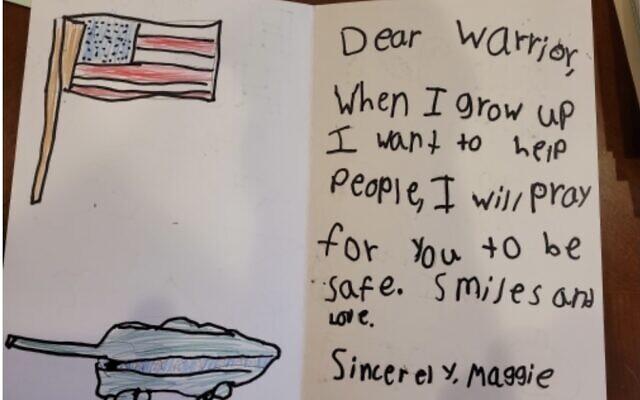 One of thousands of cards sent to soldiers. Photo courtesy of Laura Landerman-Garber

When Laura Landerman-Garber first started sending holiday cards to troops almost 18 years ago, she was hoping to reach soldiers, who, like Johnson, were far away from home.

The idea was born out of tzedakah, she said.

As a child, Landerman-Garber’s family attended Tree of Life Congregation in Pittsburgh. Her parents, Ethel “Inkie” Landerman and Edgar Landerman, often volunteered throughout the community and at the congregation.

Giving back was always important, Landerman-Garber said, so nearly two decades ago, prior to a Thanksgiving dinner, she declared to her family that the “ticket to turkey” was through writing. As a result, while sitting around the dining room table in their Hollis, New Hampshire, home, the group began drafting letters to soldiers. The effort picked up steam, and through the years the Landerman-Garber clan was joined by neighbors and friends, who sent cards to the Wounded Warrior Project, New Hampshire Veterans Home and the Naval Hospital. Before long, thousands of cards and letters were being sent worldwide and soon Landerman-Garber established a nonprofit called Holiday Cards for our Military – NH Challenge.

Donations to the nonprofit help pay for postage, Landerman-Garber said. 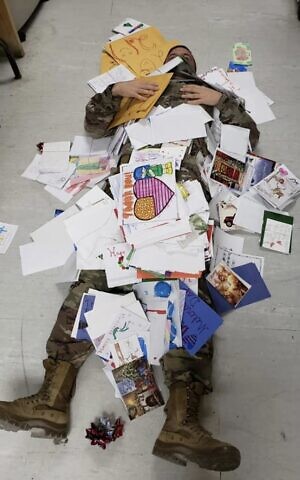 An unnamed soldier is covered in cards. Photo courtesy of Laura Landerman-Garber

Four years ago, Emily Landerman, of Fox Chapel, told coworkers at A. Martini & Co. about her sister’s project. Landerman’s colleagues at the family-owned regional construction services and general contracting company quickly got on board, she said, and helped send several thousand cards during the last few years.

The need to support the troops and their families is even greater during the pandemic, which has brought new challenges to military members, according to Landerman-Garber. For
instance, while holidays are typically a time that some members of the military are able to travel home, that was hard to do last year.

In that so many service members could not reconnect in person, “Cards can be something concrete for them to hold onto,” she said.

According to the National Council for Mental Wellbeing, a policy action center, 30% of active duty and reserve military personnel deployed in Iraq and Afghanistan have a mental health condition requiring treatment. Moreover, nearly 25% of military members have symptoms of at least one mental health condition, and almost 10% of military members have diagnoses of two or more mental illnesses, according to Psychology Today. 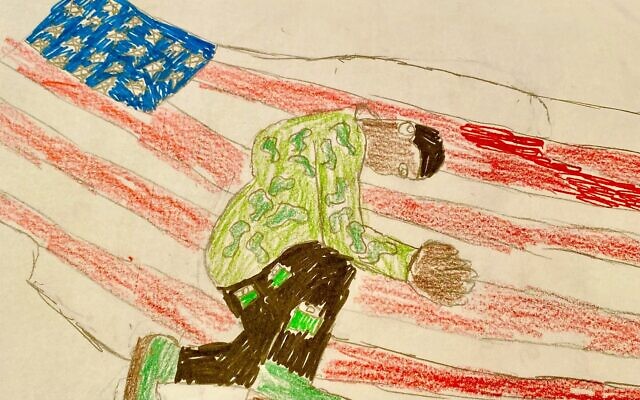 Drawing sent to a soldier. Image courtesy of Laura Landerman-Garber

Whether a soldier is stationed overseas or domestically, the holiday season could potentially be another period of isolation because of the pandemic’s resurgence, so Landerman-Garber, Johnson and volunteers at Holiday Cards for our Military – NH Challenge are trying to remind troops, and their families, that their military service is valued, and they aren’t alone.

Whether a soldier is in Utah or on the other side of the world, it’s important they know their service and sacrifice is appreciated, said Johnson.

Landerman-Garber noted that after the Jan. 6 insurrection at the Capitol, the nonprofit sent 10,000 cards to National Guard members who were stationed in Washington D.C.

Soldiers can “sometimes feel lonely, and small things like these help a lot,” he said.

When someone sends a card it forges a connection, said Landerman-Garber, who cited a message sent from Ashley, an 8-year-old from Hollis, New Hampshire, as an example.

Scrawled across a piece of paper were the words: “Dear warrior, I am very lonely but when somebody loves me I feel better. How about I love you?”

Even an 8-year-old can share something profound, Landerman-Garber said. “She recognized an ache, understood what made her feel better and offered that as a gift to someone who, in all likelihood, she will never meet.”

Each year, thousands of cards are sent, and every single message counts, said Landerman-Garber, because “if that card wasn’t written, then it never would have been received.” PJC

Adam Reinherz can be reached at areinherz@pittsburghjewischronicle.org.