From morning until dusk on Oct. 27 people quietly came to the Tree of Life building. After arriving with flowers, handwritten cards, painted rocks or other mementos, the steady stream of passersby made a point of pausing at the temporary fence on the corner of Shady and Wilkins avenues. The galvanized steel barricades were a place to rest and deposit items, stand in silence, even pray.

Jewish professionals, journalists and volunteers from area congregations and organizations spent prolonged periods at the site where 11 Jews were murdered during Shabbat services two years ago, but the day’s spirit was noticeably different than it was on Oct. 27, 2019.

Perhaps because of the pandemic, or that it was a Tuesday — Oct. 27, 2019, fell on a Sunday — the scene outside the building this year was a bit quieter, said Barb Feige, Tree of Life’s executive director.

Even without the crowds, Feige was busy welcoming visitors to the outdoor space and answering questions about the congregation’s general state and how its families are doing.

“Most of the people who come here don’t need to engage with us,” Feige said. “All they want to do is come and breathe and connect. They stand at the fence barrier and they feel. They just stand there and feel whatever it is they need to feel.”

The reasons for coming to the corner were personal, as were the items brought. One individual, during a morning visit, left an empty white plastic pill bottle. Written alongside the prescribing physician’s name — Jerry Rabinowitz, who was among those killed during the 2018 attack — was the message “May his memory be a blessing.” Another individual left a bouquet with a note reading, “Your Christian brothers and sisters have not forgotten you.” 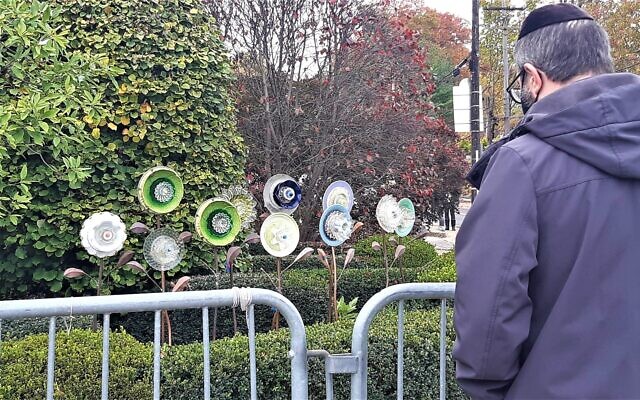 Richard Rattner, of Squirrel Hill, came to the corner last year. He returned this year because of his friendship with Cecil and David Rosenthal — the brothers were among those killed in the 2018 shooting.

“I think it’s important to remember,” said Rattner after reciting Yizkor, a memorial prayer recalling the deceased. “It was more for the memories and not letting the victims become faceless.”

For nearly two years, Alan Hausman, a Tree of Life vice president, has implored visitors to keep that principle in mind.

When a government official arrived at the corner around noon, Hausman walked west with him on Wilkins Avenue. After reaching the building’s locked glass doors, where contents from the former makeshift memorial are displayed, Hausman recalled each of the 11 people who were murdered on Oct. 27, 2018. He described their personalities, what they’d wear to Shabbat services, the types of jokes they’d tell and what role each person played within their congregations.

Gessler, a Steubenville resident, was in Homestead when she heard a radio report about the second commemoration of the shooting at the Tree of Life building. Gessler told her three children, ages 9, 13 and 19, that the synagogue was nearby and that it was important to go there.

“I think it is truly horrific what happened two years ago and it comes to me as kind of just a shock that something like this could happen in a city like Pittsburgh,” said Gessler’s son Emmanuel, 19. “It just shows how much more work needs to be done to stop this kind of extremism.” 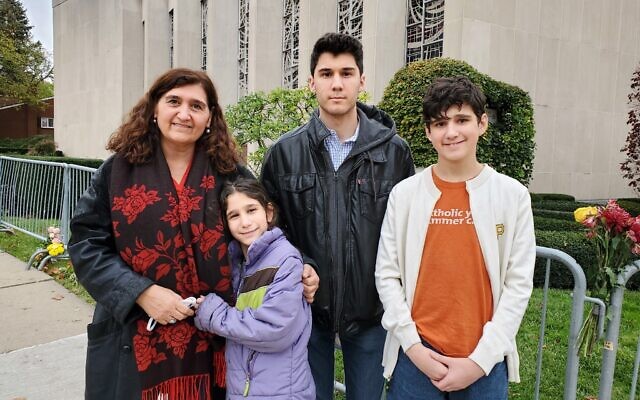 Stationed across the street from the Tree of Life building were representatives from the 10.27 Healing Partnership, Center for Victims and Jewish Family and Community Services. The staff, and their respective organizations, provided resources and space for those who wished to talk, sit or enjoy the company of Cooper and Nelly, two docile canine advocates.

Vanessa Wheeler, of Center for Victims, estimated a “couple dozen” people stopped to pet the neatly groomed dogs throughout the day.

Stefanie Small, JFCS’ clinical director, credited the many professionals who spent the day offering aid to passersby, and said that JFCS will continue “to support the community in whatever need and way we can.”

With the online commemoration program scheduled to stream at 7 p.m. that night, the many professionals and volunteers began packing up before dark. Shortly before leaving the area, Hausman walked south on Shady Avenue toward Solway Street and the nearby assembled police officers. Hausman, who serves as Chief of PA Strike Team 1, an urban search and rescue team, wished to thank the officers for standing guard and enabling scores of people to safely visit the corner.

Whether it’s Oct. 27, or any other day on the calendar, it’s important to remember people, to acknowledge any love received and to return those kindnesses, explained Hausman.

“Pittsburgh is just a big small city,” he said. “People in Pittsburgh rally and help each other. And that's the way it's always been and the way it always will be.” PJC