Tony Benintend’s commitment to exercise led to an ironic outcome: If he hadn’t regularly attended step aerobics, power and core classes at the South Hills Jewish Community Center, his knees wouldn’t have bothered him so much — yet that discomfort likely saved his life.

Benintend, 75, found a community of like-minded peers at the South Hills JCC’s Silver Sneakers program, he said, but when group exercise classes became more physically taxing he visited his doctor. During the checkup, Benintend described his knee pain and shortness of breath. The latter resulted in his medical team finding three blocked arteries. One month later, he had triple bypass surgery.

With that now behind him, Benintend is back at the South Hills JCC thrice weekly — exercising, socializing with friends and benefiting from “highly qualified instructors,” the Peters Township resident said.

Had it not been for the JCC’s talented and attentive staff and members, “we might not be having this conversation,” he added. The instructors make sure people do things “safely and correctly,” and the members themselves offer positive encouragement. Collectively, it makes a person feel like they “want to be there.”

Exercise for older adults promotes independence, reduces the risk of falling, dying from coronary heart disease and of developing high blood pressure, colon cancer and diabetes, according to the Centers for Disease Control and Prevention.

Exercise also helps combat physiological changes like muscle loss in seniors, according to Dr. Terence Starz, former chairman of the division of rheumatology at UPMC-Shadyside Hospital.

For seniors, staying physically active isn’t as easy as it may have been when they were younger, Starz noted. Whether because of muscle weakness or diminished confidence, a “vicious” cycle ensues within the body and mind where decreased muscle loss and physical activity lead to reduced socialization, increased isolation and distress among seniors. 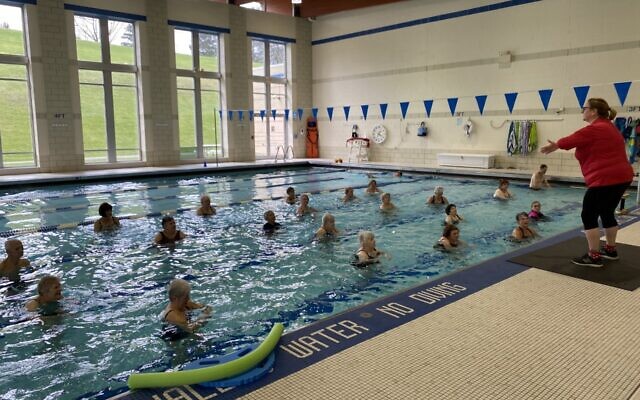 Mt. Lebanon resident Norina Daubner has “bad shoulders and not wonderful knees,” she said, but she follows a routine to “keep everything running.”

Each week, Daubner, 83, attends aqua aerobics and Zumba gold classes twice, tap dancing once and meets up with friends another time to exercise, all at the South Hills JCC.

“Exercising is important in giving you a sense of well-being,” she said. “When you exercise in a group environment, you meet people with similar interests. The social aspect keeps you engaged with other people.”

There are plenty of days when staying at home and reading a book is more appealing than attending an exercise class, but she still signs up and goes.

Daubner’s routine, though, is not typical among seniors. CDC researchers estimate that nearly 74% of adults above age 50 are not regularly active.

Nancy Zionts, chief operating officer and chief programming officer of the Jewish Healthcare Foundation, said the Pittsburgh-based organization has long promoted wellness, but around 2016 began holding a series of conversations with community partners about increasing opportunities for seniors.

At the time, there were several studies regarding social isolation among older adults and the public health risks associated with physical inactivity, and the JHF began identifying ways to engage older adults in “outdoor exercise and in connections among community,” Zionts said.

As part of its “Senior Connections Initiative,” the JHF issued multiple grants aimed at increasing opportunities for older adults to meaningfully engage in various exercise and recreation programs throughout the year.

One outgrowth of those grants was the creation of the Virtual Senior Academy, a free online educational platform for adults 50 and up to connect throughout the Pittsburgh region (VSA has since expanded and is now run by AgeWell at the JCC).

Another grant enabled the Allegheny County Parks Foundation to create a mobile-friendly application of maps, text and images highlighting curated walks and events for seniors.

A typical program lasts between 60 and 90 minutes and includes discussions not only about flora and fauna, or the various benefits of exercise, but practical advice about bodily mechanics — like how to properly walk and avoid falling, Starz said.

“Fit with a Physician” is a “lovely program,” said Valerie Beichner, Venture Outdoors’ president and CEO, who credited JHF with helping Venture Outdoors create new and robust opportunities since that initial grant. 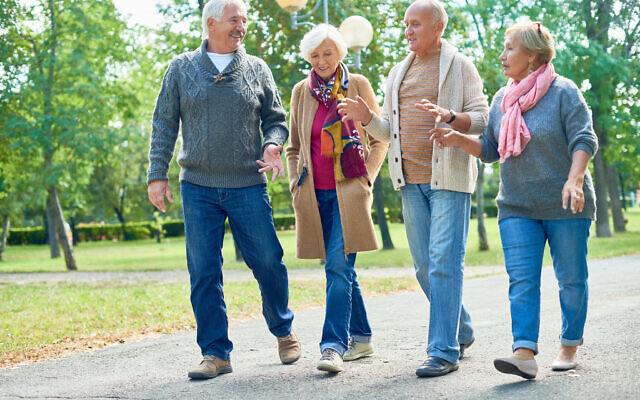 The funding, Zionts explained, will support the growing need within the senior community for social connection and physical well-being exacerbated by the pandemic.

Before the March 2020 shutdowns, the National Academies of Sciences, Engineering, and Medicine reported that 24% of “community-dwelling Americans” age 65 and older are socially isolated and that 43% of adults aged 60 and older are lonely.

Researchers noted that what was already a public health risk for older adults worsened throughout the pandemic.

Less than two years after its 2018 poll on healthy aging, the University of Michigan reported that feelings of loneliness had dramatically increased among adults aged 50-80. Whereas 27% of the demographic felt isolated from others in October 2018, the number swelled to 56% between March and June 2020.

Tap dancer and Crafton resident Mona Rush noted that once the pandemic began, she transitioned from group and private instruction at the South Hills JCC to online lessons.

“It wasn’t great, but it worked,” Rush said.

The online classes not only helped her continue exercising, she added, but also preserved community.

“We’ve formed bonds,” Rush said. “We are supportive of one another. We are friends.”

One of the difficulties experienced by older adults during the pandemic was losing connections with their friends, noted Elaine Cappucci, wellness director at the South Hills JCC. For some people, “the only times they see each other is at the JCC,” she said, adding that the JCC has relied on the advice of health professionals in determining that classes should be held in person given the “value of seniors socializing while, before and after exercising.”

There are many ways to create bonds as well as plenty of opportunities to find an activity or trainer “that you love,” Cappucci added. What’s important for older adults to know is that “exercise can be fun, and it doesn’t have to be running miles and miles and lifting heavy weights. You can get a great workout seated or standing. Gyms aren’t all for 20-year-old muscle-bound people.”

Starz, a JHF trustee, agreed, and recalled a lesson he learned from the senior member of his rheumatology group, the late Dr. Paul Caplan, who lived to be 107.

“Dr. Caplan used to say you have to keep yourself physically and mentally active; you have to learn new things every day; and that you have to make effective transitions,” Starz said.

After more than two years of the pandemic, it’s time for many older adults to transition and reincorporate exercise within their lives, he continued. For those who’ve done so, “it’s added a very positive dimension.” PJC