After months of delays due to COVID-19, “Chutz-Pow! Volume IV” was finally released. The newest installment of the comic series focuses on Holocaust-era women’s stories, a subject historians and researchers have long overlooked, explained Lauren Bairnsfather, director of the Holocaust Center of Pittsburgh.

“Women’s stories are really neglected in the history of the Holocaust,” said Bairnsfather. “I mean, certainly they're underrepresented. By dedicating an entire volume of ‘Chutz-Pow!’ to women's stories, we really put these stories front and center.”

In bringing women’s tales to the forefront, writers and illustrators tackled issues ranging from the fluidity of identity to enslavement and physical abuse.

These diverse stories need to be told because “women experienced the Holocaust as women,” said Bairnsfather. “When we leave out these stories, we're really not addressing the big picture.”

“Chutz-Pow!,” which is often used as an educational tool in classrooms, has long tackled difficult narratives. For its writers and illustrators, the newest edition has “been the most intricate volume of the series to date,” explained Marcel Walker, “Chutz-Pow!” project coordinator and lead project artist.

“There were more moving pieces,” he said. “We were profiling more people, and there were more creative participants working on it.”

The diversity of artists and authors — all with a Pittsburgh connection — enabled better storytelling, Bairnsfather said. 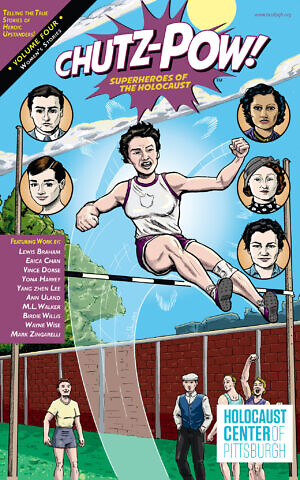 The 10 contributors provided unique yet complementary ways to improve the product, Walker said. The challenge was keeping everything aligned once the pandemic hit. Although about 85% of the project was complete prior to March 2020, there were still elements that needed tightening. Whether it was editorial revisions or post-production changes, finishing the volume remotely was cumbersome.

“My job essentially became the equivalent of curating a gallery show with a bunch of different artists involved,” said Walker. “It can be work curating a show with a single artist, but when you're talking about 10 artists and trying to get the best out of them and making sure all the work is compatible, that's a lot of work — good work but it’s work.”

Volume IV is now available for sale on Amazon and at local stores, including Phantom of the Attic in Oakland and Wildcard in Lawrenceville.

“One thing I can say about this volume is that we have some really exciting stories of athletes and spies and clothing designers, and we include stories of LGBTQ heroes of the Holocaust,” said Bairnsfather. “We really bring in important diversity.

“Sometimes we tell these stories just to say these people were there,” she continued. “Groups that we don't see so well now in 2020, we also really didn't see when we're talking about histories from the 1930s and 1940s.”

For Walker, the volume’s worth rests not only in its scope but the timing of its release.

“I look at this book as a blessing — the time it came out, and the way it came about, and who was able to be involved and what it's able to say in this moment,” said Walker.