Prior to their daughter’s birth, Robyn Engel and John Secreto packed a bag with clothing, face masks and other staples of modern travel. As they headed to St. Clair Hospital’s Family Birth Center, they also brought along a car seat for their new baby.

“The doctor made clear to us that once you’re in the hospital you can’t leave,” said Secreto, 49.

Pregnancy and delivery can be stressful under the best of circumstances. Managing both in a pandemic-laden world is something else entirely, said Secreto: “There’s no preparation for that.”

The pandemic caused the Dormont Jewish couple to miss some of the typical joys of pregnancy.

“John didn’t get to go to any of my doctor’s appointments other than the 20-week ultrasound and then the delivery,” said Engel. 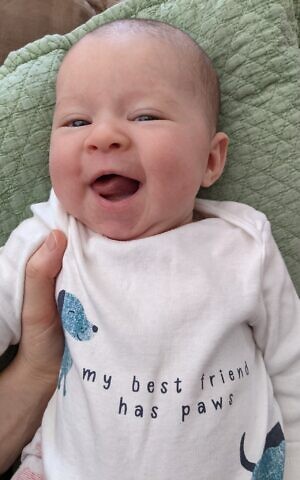 Secreto would drive Engel to the doctor, but usually just stayed in his car waiting for text updates, he said.

“Sometimes it was more difficult than others,” he said. The experience taught him to adapt and “do the best you can.”

Almost three months since their daughter, Mina, was born, the new parents are balancing sleepless nights with learning on the fly, all while worrying about potential exposures and viral spread.

“Even if this wasn’t a pandemic, it would have been a complete paradigm shift,” said Engel.

“Thank goodness we have a backyard,” Secreto said. “We’ve been able to engage with friends on our terms.”

Nearly 18 months ago, when Berman, 34, became pregnant, neither she nor her husband imagined her pregnancy would be filled with countless pandemic-related calculations.

Had there not been COVID, they probably would have been able to get more physical support, said Berman: “We don’t have family in this immediate area and that has been particularly tricky.”

Small favors new parents could ask of others before the pandemic — like help with the baby during a shower or nap — are no longer so simple.

Berman’s mother came to town for a few weeks after delivery, but “for the most part, it’s just been me and my husband,” said the Squirrel Hill resident.

Berman appreciates the extra time her young family has spent together, but said managing their schedule has required “coordination.”

As a genetic counselor, Berman sees patients mostly in person.

“I’ve been dealing with exposures at work, and as anyone who works in health care knows, there are risks,” she said.

Berman was vaccinated on Dec. 28. Her husband still hasn’t been immunized, and in order to reduce the possibility of infection, she’s assumed responsibility for things like grocery shopping.

As vaccinations continue, and warmer weather arrives, Berman grows more optimistic about the future. The winter was “not ideal for those of us who have dogs and children,” she said, but it “is what it is and we'll have spring again.”

Palmer Krasnow was born Feb. 1, 2021. Her parents, Andrew and Hannah Krasnow, of Shadyside, got married last year and soon began planning to start a family.

“We’re both happy that we didn’t wait until this is over because no one knows when it will be,” said Andrew, 38.

Although the pandemic disrupted many of the Shadyside couple’s plans — including shifting what was supposed to be a large wedding into a smaller 20-person affair — the Krasnows are pleased they continued “moving on with their lives.”

“It’s been nice to do all of this during the pandemic,” said Andrew. “Although COVID is terrible, we tried to make the best of a terrible situation.” “The biggest negative is not being able to spend as much time with our family once Palmer arrived, and also worrying about her getting it,” said Hannah, 31. “I think the biggest pro, in a selfish way, is the timing worked out for us.”

Andrew agreed, but said he understands why others might delay major life choices during a pandemic.

“I think every person has the right to take this as seriously as possible,” he said. “I get both sides of it.”

Lauren and Aaron Ruben met on JSwipe in 2017.

“We knew quickly from dating that we wanted to move in together, get married and have kids,” said Lauren, 35.

After the South Side residents tied the knot in November 2019, they decided to try to get pregnant. Then, just a few months later, the pandemic set in.

“We weighed our options, and we asked each other if this is going to stop us from what we want for our family,” said Lauren.

Lauren got pregnant last July; since then, the couple has balanced remote employment (Lauren is a senior merchandise planner for Rue 21, Aaron is a project manager for Buchanan Ingersoll & Rooney), doctor appointments and time together.

“Before all of this, when we were working these schedules from 8:30 a.m. to 6 p.m., we were getting home and rushing for dinner,” said Aaron, 40. “In today’s world, sometimes you feel like ships passing in the night.”

Working from home has been helpful, said Lauren. “During the first trimester when I was sick, I got a bed desk and could throw up when I wanted to,” she said. “I don’t have to worry about maternity clothes — it’s been Costco pajamas.” 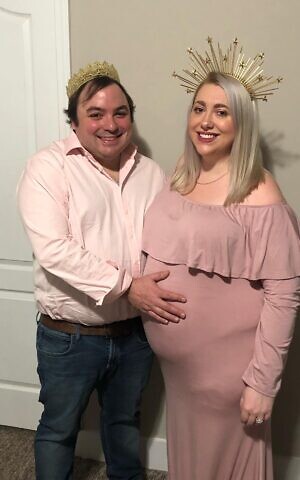 There are definite advantages to a pandemic pregnancy, like spending more time together, designing a nursery and preparing a registry, but there is also the flipside, explained Aaron: “There’s just the stuff you have to deal with, being hypervigilant about everything.”

Since the start of Lauren’s pregnancy, the Rubens haven’t seen many friends or family members.

“I probably leave the house a maximum of three to four times a month, and that’s for doctor’s appointments and really important errands or picking up food,” said Lauren. “If you’re pregnant you’re more at risk, and for me it’s really tough because I’ve only seen my mom once since November. My mom hasn’t been able to experience this with me.”

Lauren’s mother lives in the South Hills, and was one of 80 people who attended a Zoom baby shower for her daughter.

Aaron said he’s spent many of his wife’s doctor appointments waiting in the car, and, although he’ll be permitted to join Lauren during delivery, he was told to expect a “draconian” environment upon arrival at the hospital.

“Her mother can’t come in and you can’t really leave once the baby is born,” he said.

Even with all of the hospital and self-imposed restrictions altering the pregnancy and birth experience they thought they would have, the Rubens are well aware of their blessings.

“Obviously, in the scheme of things, with everyone dying of COVID, and people saying goodbye through FaceTime, it really puts it in perspective,” said Aaron.

“Throughout this process sometimes it’s hard to maintain a positive attitude — my friends haven't seen me pregnant, I’ve seen my mom only once — it’s isolating and hard, but what helps us as a couple is telling each other one thing we are grateful for or something that we loved during the day,” said Lauren. “It’s really cheesy, but it helps.” PJC