Neighbors, strangers, communal servants and students visited the Tree of Life building on Oct. 27. Some parties traveled en masse — like a group from Yeshiva Girls High School that recited Psalms and encouraged passersby to “bring light to darkness.” Other visitors arrived alone or in pairs — some with flowers to leave along the fence bordering Shady and Wilkins avenues; some came with pastries and other tokens of appreciation and remembrance. People brought dogs, stress balls and other things of comfort. Runners — several of whom regularly pass the busy intersection — paused to pay respects; others stopped to gain centeredness and perspective.

As the cool morning temperatures and ashen skies gave way to afternoon sun and blanketing warmth, Pittsburghers once again made their way to a shuttered Squirrel Hill synagogue in remembrance of 11 Jews from Congregation Dor Hadash, New Light Congregation and Tree of Life Congregation who were murdered inside the building four years ago.

Before heading to work at UPMC Children’s Hospital of Pittsburgh, Rachel Goldberg walked north along Shady Avenue from her Squirrel Hill home. After arriving at the edge of the Tree of Life property, she removed her phone, pulled up several chapters of Tehillim and quietly prayed.

Goldberg does this every year on Oct. 27. “It’s important to show up and try to eliminate hate,” she said.

Moments later, Edgewood resident D’Ray Wise told the Chronicle his annual visit to the Tree of Life building was both a reminder and a way to take action. 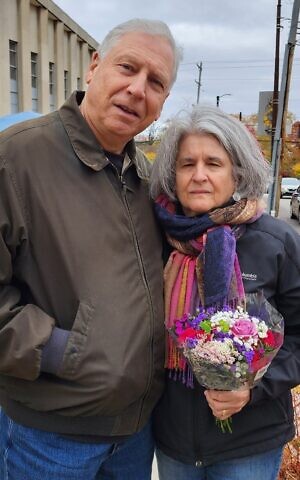 Edward and Diane Cordisco bring flowers to the Tree of Life building on October 27, 2022. Photo by Adam Reinherz

“I don't live in the area anymore, but I still come up every year. I'm a person of consistency, and I care for everyone — especially with things going on right now. I truly care about supporting the Jewish community as they go through remarks that were recently made by someone in the celebrity realm,” Wise said.

Maggie Feinstein, director of the 10.27 Healing Partnership, said she wasn’t focusing on acts of hatred, the perpetrator or the upcoming trial.

Several feet from Feinstein, representatives of the 10.27 Healing Partnership, JFCS and the Center for Victims stood beneath a canopy. The team of therapists greeted passersby and offered coffee and other treats.

Squirrel Hill resident and Jewish Community Center of Greater Pittsburgh President and CEO Brian Schreiber brought pastries to the corner of Shady and Wilkins. Before walking to the nearby Pittsburgh Police Zone 4 Station to distribute the treats, Schreiber gave a baked good to Officer David Shifren, who stood near the Tree of Life building.

“The first responder community was incredibly helpful,” Shreiber said. “They say they're just doing their jobs, but they went above and beyond. They put their lives on the line to help save people, and did save people, and we just wanted to show some appreciation.”

Shifren, a community resources officer in Zone 4, said the acknowledgment is a reminder of bonds shared throughout the area. 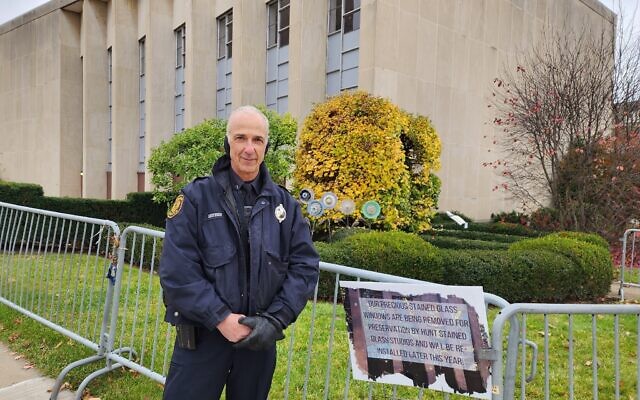 Officer David Shifren stands outside the Tree of Life building on October 27, 2022. Photo by Adam Reinherz

When the event happened four years ago, members of diverse faiths came together to support Pittsburgh’s Jewish community; this is a city of bridges, but it’s not just “physical structures,” Shifren said. There are “bridges here between religious backgrounds, ethnic backgrounds and social backgrounds.”

She said her gift of zinnias and hydrangeas was essential.

“Every year, I feel obligated to come and pay my respects,” she said. “Community is so important and our neighbors are so important. We share the same air, share the same space, the same God made us. We need to remember each other today with kindness.”

“The 11 murdered are still living through us,” Leah Rosenfeld said.

“We are bringing light back to a place where someone can put so much darkness,” fellow student Basya Taub said. 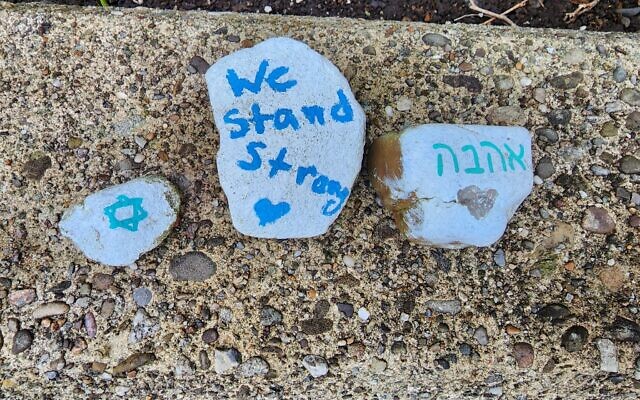 Painted rocks left outside the Tree of Life building. Photo by Adam Reinherz

Shortly after the students finished afternoon prayers, Monroeville residents Edward and Diane Cordisco arrived with a handful of flowers.

When asked about the bouquet of baby’s-breath and roses, Edward Cordisco replied, “I just love the white because it symbolizes to me there's still light in this tragedy.”

What happened here four years ago was “just terrible and some wonderful lives were taken by a force of hatred that's out there,” he added. “And I saw the white this morning, and I was like, ‘I don't know, there are all these terrible things that may happen [but] there's still something that might be joyful.’”

Before heading to the afternoon commemoration ceremony at Schenley Park, Feinstein noted how many people told her that they felt “drawn” to the corner of Shady and Wilkins.

There’s something “we feel in our bones,” Feinstein said. “And I think about how remarkable it is that all of our neighbors feel that at the same time.”

Although it’s “normal” to experience the impacts of the trauma four years after the event, emotions don’t follow a definitive path, Feinstein added. “I just want people to know that there's no timeline for any of this, and that whatever you feel is reasonable,” she said. PJC