Pittsburgher Herbert Mandel, 97, clearly recalls that day in 1945 when, as an Allied soldier in Germany, he happened upon three concentration camp prisoners near the Harz Mountains. That chance encounter led to the liberation of Langenstein-Zwieberge, an extermination camp — and the preservation of generations to come.

In a recent interview with the Chronicle, Mandel described the day of the liberation in early April 1945.

The Ruhr, western Germany’s industrial center, was collapsing, and to avoid a congestion of Allied soldiers on their way to securing a key victory in World War II, Mandel, and other members of the 8th Armored Division 399th Armored Field Artillery Battalion – Battery C, brokeoff and headed toward the mountains.

Night arrived but the men kept walking. Eventually they stopped, set up a position and began firing, but there was no fire in response. Instead, three men — inmates — approached.

One had a missing finger and required medical attention.

The wounded inmate spoke Polish, as did Mandel’s sergeant, and he explained there was a concentration camp hundreds of yards away.

“We were in action, we were firing,” Mandel said. “We couldn’t abandon our mission so we radioed back to our headquarters.”

A reconnaissance group was dispatched on April 11, and confirmed the inmates’ claims — Langenstein-Zwieberge, a sub-camp of Buchenwald, was indeed hundreds of yards away. 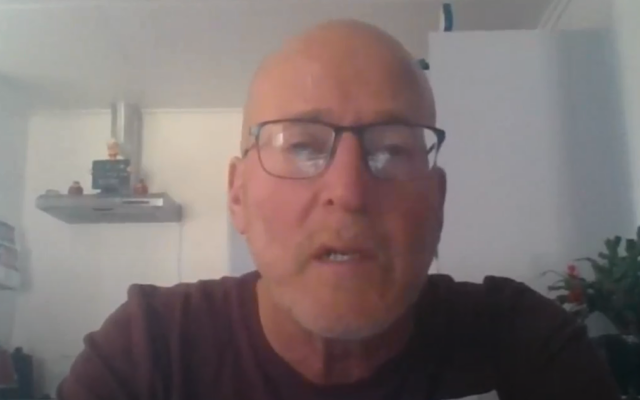 At Langenstein, inmates were required to work approximately 15 hours a day and given “a small ration of dry bread and water” for sustenance, according to military records. “When prisoners became too weak to work they were generally executed by SS guards” and buried in a communal grave with “a new layer being added each day.”

At the time of the April 14, 1945, liberation, there were 1,100 male prisoners in Langenstein, with about 25 to 30 people dying each day and the average man weighing just 60 pounds. Dysentery was rampant, the barracks were infested with lice and most of the inmates were “stretcher cases,” according to the records.

Last month, on the 76th anniversary of liberation, Stuart Lesorgen, the son of one of those 1,100 men — Wolf Lesorgen — posted a message on Facebook on behalf of his deceased father and the rest of his family thanking the liberators who “changed the lives of thousands of descendants of those liberated.”

Mandel’s daughter, Rosanne Levine, saw the post. She reached out to Lesorgen and told him that her father, a liberator, was still alive and offered to connect them.

One challenge, though, was timing. Mandel is a Squirrel Hill resident, and Lesorgen lives in New Zealand. A 16-hour difference separates the two. Further complicating matters was the pandemic. Since COVID-restrictions took effect, Levine has had limited in-person contact with her father, who lives in Heritage Place, a UPMC Senior Community. But when UPMC staff discovered Lesorgen’s desire to connect with Mandel, they permitted Mandel, Levine and three other members of their family to sit together for a Zoom call with Lesorgen and others who were connected to the liberation of the camp. 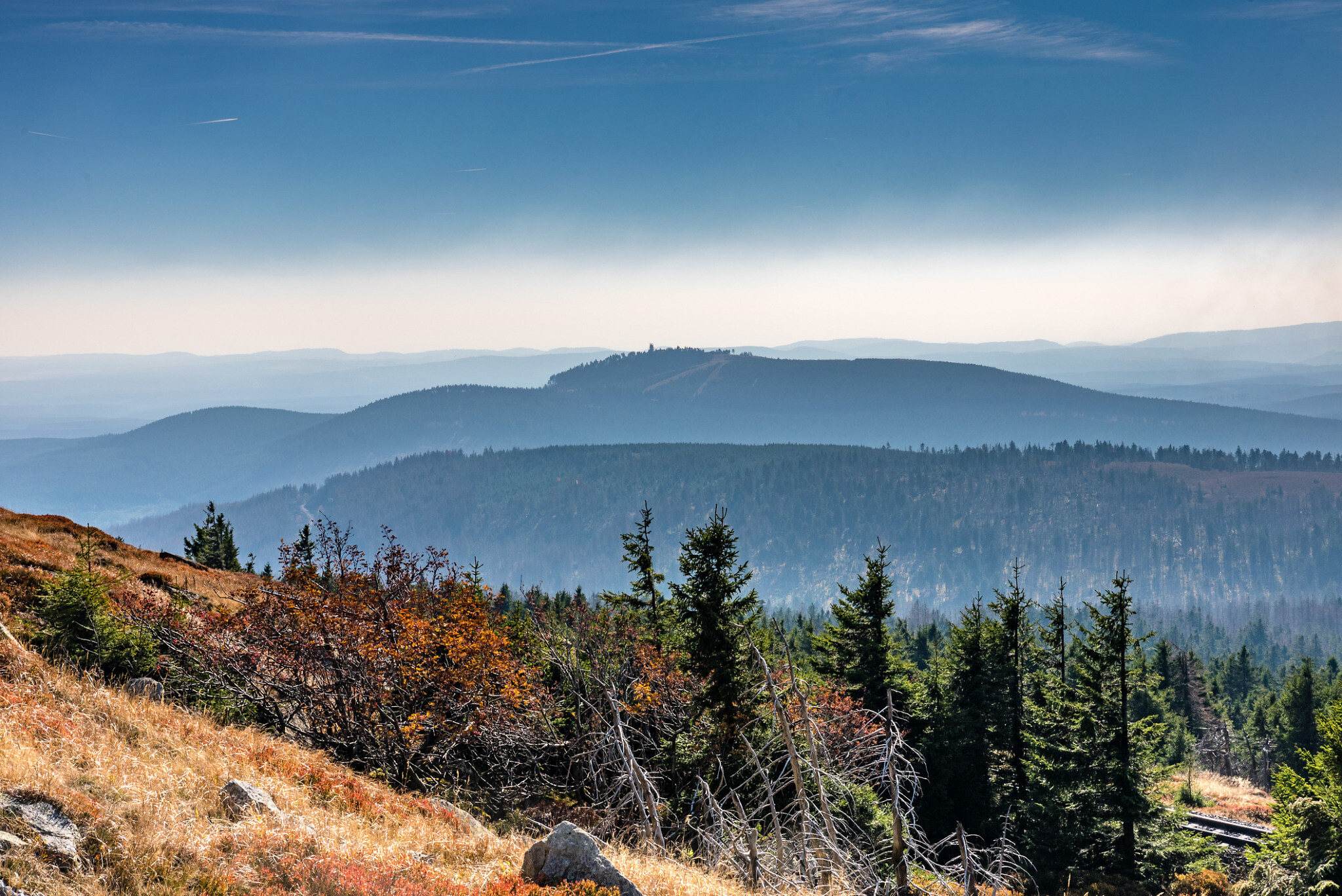 Though separated by a generation and a lifetime of experience, on April 30, Mandel and Lesorgen shared personal histories for nearly two hours. Midway through their discussion, Noel March, of Bangor, Maine, was introduced. March’s father, Leonard Marchlewski, was a member of the 8th Armored Division and among those who liberated Langenstein. On behalf of his family, and his deceased father, March thanked Mandel for his service and the liberation of Langenstein.

Mandel, overcome by emotion, then shared a story he had kept to himself for 75 years: When the fighting finally stopped, he recalled, the five batteries in the 8th Armored Division lined up. A commanding officer announced that each battery could take two of the healthier liberated inmates for kitchen patrol duties. One evening, two of the “KPs” were completing their work when they saw a former Langenstein guard bicycling down the road. The KPs abandoned their tasks, ran out after the man and pulled him from the bike.

“He was a guard, their guard,” Mandel said. “They dragged him off and started beating him. And they beat him senseless.”

As the pummeling continued, members of the Allied battery gathered to watch. A soldier then handed one of the KPs a pistol. The boy accepted it, raised it up and “finished off” the former captor, said Mandel.

“I never mentioned that story to anyone but I think on this occasion you should know that there was retribution at least for one guard,” he continued. “The guards were cruel. They were from the SS, and they were cruel beyond belief…I wonder how the Germans could be that cruel. How could they? A country where Jews had had freedom over long periods of time, a country which was rich in musical composition, literature, in science, universities that were world renowned. Incredible.” 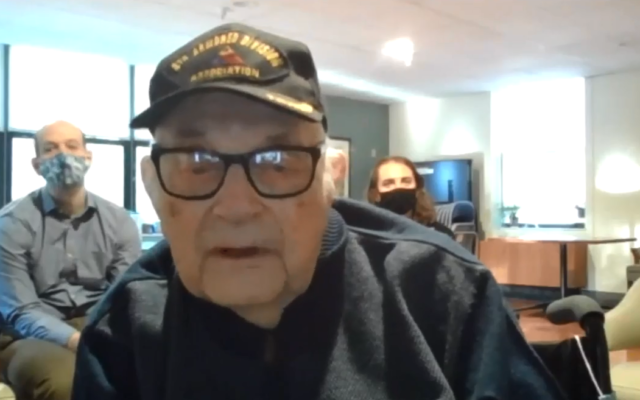 In the years following World War II, Mandel did not speak much about his military experience, Levine said. Once, when she was in her 30s, she overheard a conversation between her father and her cousin. At that point, nearly 50 years had passed since liberation.

“It took him all that time to talk about it,” she said.

Near the end of the April 30 Zoom call, Rev. Frances Metcalf, a UPMC chaplain who helped facilitate the call, spoke up.

“I grew up in a culturally Jewish family, and though I’m a priest in the Anglican Church now, I too had family members who died in Auschwitz,” she said. “So this is personal for me, too.”

Prior to attending seminary, Metcalf worked as a fundraiser in Washington D.C. securing money for what would become the United States Holocaust Memorial Museum. She said that she and others clung to a mantra during that period — a sentiment espoused by the late Elie Wiesel.

“For the living and the dead, we must remember,” said Metcalf. “And that’s what this is about.” PJC