Jonathan Schwartz needed a haircut. The University of Pittsburgh senior exited his dorm and ambled down Forbes Avenue toward an old haunt. Before the pandemic forced Schwartz and thousands of college students to return home for more than a year of virtual learning, he was able to get a trim easily. Now he couldn’t. On his walk through Oakland — a .5-square- mile area buttressed by universities, hospitals and about 20,000 students — Schwartz discovered one barbershop had closed and another required a three-hour wait.

Schwartz was frustrated. It wasn’t that he couldn’t get a fade — early on in the pandemic, he, too, learned how to operate clippers and shears — but being back on campus, Schwartz desperately wanted to resume a life he once had.

“You go out to try to do things, and what used to work doesn't work anymore,” he said.

Whether it’s the inability to get a quick buzz, study for hours in a restaurant or easily meet up with friends, many of the pre-pandemic aspects of college life have changed.

“If I'm being honest, this has been an extremely hard semester,” said Daniel Hochman, a University of Pittsburgh junior. “We had to get adjusted to this other way of life. And now we're trying to adjust back, and it's kind of like being thrown to the dogs.”

When the pandemic hit in March 2020, Hochman went home to Marlborough, Massachusetts to finish the semester online. In August 2020, he returned to Oakland.

Hochman said that he’d managed virtual schooling during the Spring 2020 semester, and had already signed a lease, so coming back to Pittsburgh for Fall 2020 made sense.

The move, however, was disastrous.

“I was very socially isolated. I only lived with one roommate who wasn't around a lot. And there really wasn't any relief from the constant being online,” Hochman said.

The stressors increased. Hochman was accustomed to living away from his family, and he already knew how to cook and clean, but tending to an entire apartment became increasingly exhausting.

“It’s pretty impossible to relax when you're eating, sleeping, doing laundry, cleaning, doing class and schoolwork all in the same place,” he said. “You start to associate where you are with all those things, and home isn't just home anymore.”

Hochman’s mental health suffered. He said his earlier diagnoses of anxiety and depression were exacerbated by the pandemic, while his feelings of loneliness were compounded by a belief that others were not experiencing similar struggles.

“It was hard to see other people living in a house with their best friends, having a good social time or not following COVID guidelines,” he said.

As the Fall 2020 semester continued, Hochman contacted a therapist from Massachusetts. The sessions were helpful, but he realized the situation wasn’t improving.

“It's hard to get better when the circumstances are out of your control,” he said. “It’s really a matter of just coping.”

Hochman finished the semester and transitioned to part-time schooling in the spring. He paired 5 credits of classes with a job at a coffee shop that required 25 hours a week of his time. Hochman’s happiness increased.

But when the Fall 2021 semester arrived, and thousands of students — including Hochman and Schwartz — returned for in-person instruction, it wasn’t as though life returned to a magical pre-pandemic period. Well before COVID became something for college students to navigate, mental health was already a serious concern on campuses. COVID simply added to the existing pressures of schoolwork, friendships, student loans and the prospect of employment.

On Dec. 2, researchers, including those from University of Pittsburgh and Carnegie Mellon University, announced that after a year of the pandemic, the physical and mental health of college students had further declined — this, even after the availability of vaccination, an easing of distancing requirements and a return to campus for so many students. 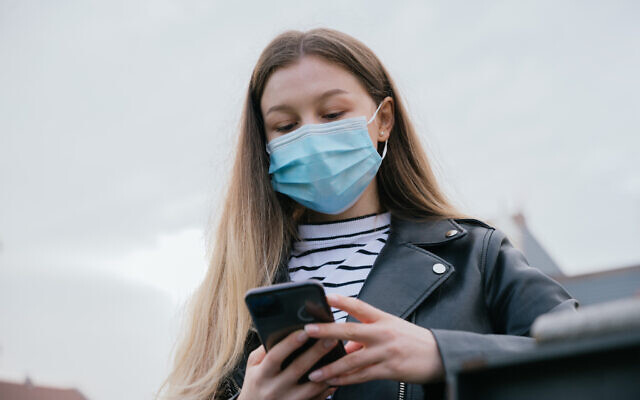 Photo by Irving Sandoval via iStock

Hannah Goldstein, a University of Pittsburgh junior, appreciates being back on campus with so many friends, after spending months at home in the Washington D.C. suburbs. But the caveat, she noted, is that college is anything but normal.

Between March 2020 and August 2021, Goldstein spent one day in a physical classroom — it was during the Spring 2021 semester, and the university allowed an in-person lecture to occur — seven people showed up, all masked and distanced, Goldstein said, “it was pretty crazy.”

“COVID was so hard,” she said. Many people struggled with their mental health, and underwent physical and social changes, “and we don’t even know the long-term repercussions.”

Goldstein mentioned that several of her friends experienced depression and anxiety during the pandemic. The university offers students a host of resources, but with winter break rapidly approaching, and the possibility of another isolating period on the horizon, Goldstein said she’s trying to have as many coffee dates as she can. “People knowing that they're there for people is so important.”

Julie Szwalbenest, a University of Pittsburgh senior, has similarly tried to get together with friends since returning to campus this semester. The difficulty, Szwalbenest said, is that everyone isn’t back.

One of Szwalbenest’s friends dropped out. A few others graduated. Even for those currently back on campus, whom Szwalbenest was friends with prior to March 2020, reestablishing a relationship after such an intense period apart hasn’t been easy.

“It's sort of like college was on a pause for a while, and then I came back and I missed a bunch of stuff,” Szwalbenest said.

And social difficulties aren’t the only problem, explained Andrew Cole, a University of Pittsburgh sophomore. The supposed aims of higher education aren’t necessarily being met, he said.

According to Pew Research Center, college is understood to serve multiple purposes, with half of the American public seeing college as a purveyor of work-related skills and another 39% believing it to be a center for intellectual growth.

Whatever college is billed as, the pandemic has “unmasked” a lot of underlying tensions, Cole said.

Start with costs. The sticker price for a degree from a public university is approximately $107,280. A private school degree, which also takes four years to complete, is almost $220,000, noted The College Board.

Upon graduating, 65% of current college students are in debt, and the amount owed, according to Education Data Initiative, ranges between $30,030 and $43,000 on average, depending on the type of university attended.

Over the course of a career, college graduates can earn hundreds of thousands of dollars more than those without a degree. But for some students, it can take up to 30 years to pay back those costs, reported Forbes.

All those months at home, where classwork required clicking on screens for hours a day, gave students a lot of time to reflect. It would be foolish to believe that some of this generation’s stress has nothing to do with economics, Cole said.

Technology, too, is a source of stress. It provided people a way to attend school for a year, but a deluge of content is being delivered to phones, tablets and screens on a constant basis, and the distance previous generations may have been able to place between themselves and particular issues no longer feels possible, Cole said. Think about last summer’s marches. So many White millennials or White members of Generation Z, “that never experienced the personal tragedies, or the personal brutality of police violence, still felt deeply affected.”

Students are being told to come back to class, engage in critical thought, but to wear masks and not worry when someone sneezes in a lecture hall, Cole said. At the same time, people are being told to socialize, make friends, explore new interests but be careful of parties or super-spreader events because the pandemic rages on. So whether it’s COVID, economics, climate change or racism, there are so many issues going on in the world, Cole said, and “I think the line between what affects us in our daily lives and what affects us on a global scale has shrunk.”

Today’s college students are experiencing numerous pressures, both seen and unseen, and while the pandemic has allowed some people to “become experts in putting on a brave face,” Hochman said, “most people I know are struggling in one way or another.”

Hochman hopes students make use of resources at the University Counseling Center and through organizations like Jewish Family & Community Services and its UpStreet program.

Szwalbenest agreed and said students need people to speak with — universities, professors and fellow classmates all have an ability to help. “It does feel like the year was taken away from me,” Szwalbenest said, “but with good mental health support and good academic support, there's still a chance for students to have a fulfilling college experience.”