Ira Scheer was preparing for Sukkot when the phone rang. As he reached to answer the Friday afternoon call, Scheer, a freshman at the University of Pittsburgh, had almost finished getting dressed. It was Oct. 2 and the festival of Sukkot was beginning shortly. Scheer was set to start the holiday with dinner at the home of Chabad on Campus co-directors Rabbi Shmuel and Sara Weinstein, but after answering his phone, his plans changed.

On the other end of line were campus officials who explained that Scheer and nearly 60 other students, spread across three floors in Litchfield Tower B, an Oakland high-rise, had to quarantine due to a potential spread of COVID-19.

“When I got the call from contact tracing I never saw it coming,” said Scheer. “Everything can change so quickly.”

With hours until sundown, Scheer, who is Shabbat-observant, readjusted to the reality that he’d be spending days in isolation. He canceled dinner with the Weinsteins, arranged for dorm room delivery of kosher meals and texted his Philadelphia-based parents, letting them know that he was going into quarantine and might have the virus, and then wished them a nice holiday.

“My mom was panicking like any Jewish mom would,” said Scheer. “They were sort of riding the roller coaster to make sure I was OK.”

Scheer is just one of thousands of freshmen across the country experiencing the challenges of college during a pandemic.

“I’ve been in my dorm a lot,” said Elena Schwimer. “There haven’t been community gatherings, or places to really meet other people.”

Schwimer is a freshman at Indiana University Bloomington. The Upper Saint Clair native was eager to attend the school due to its sizable Jewish presence — almost 4,000 students — but the pandemic halted typical ways of making friends. Restaurants and stores remain open in town, but gatherings of more than 15 people are prohibited.

“You can still meet people, but it’s difficult to meet people and create relationships of substance,” said Schwimer, who is studying fashion design and media.

Before heading off to school in August, Schwimer understood that the pandemic might create unexpected challenges. She’s adjusted to the pressure of managing asynchronous digital instruction, and even the hardship of contracting COVID-19, relocating to an isolation dorm, eventually coming home to Upper Saint Clair and then returning back to Bloomington, all during her first semester.

“I knew it was going to be difficult,” she said. “What I realized is that I needed to change my attitude and try my best to reach out to meet new people.” 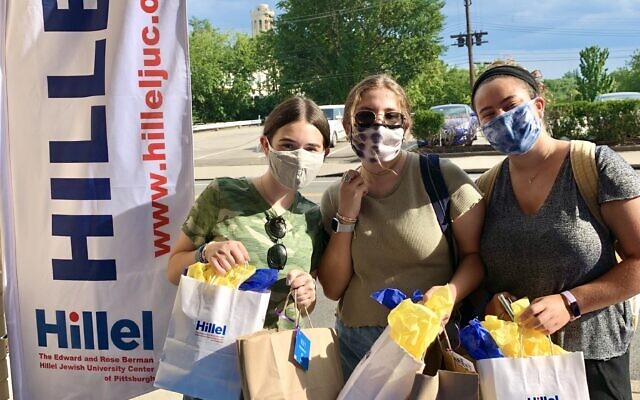 Students grab bags with a Shabbat ritual kit and a meal as part of Hillel JUC’s Shabbat 2 Go. Photo courtesy of Hillel JUC.

College has long been considered a bastion of higher learning, but the university experience also enriches students through social engagement.

A 30-year longitudinal study in the journal Psychology and Aging demonstrated that frequent social interactions at the age of 20 directly benefited social and psychological outcomes 30 years later.

“It’s often around this age that we meet people from diverse backgrounds, with opinions and values that are different from our own, and we learn how to best manage those differences,” said lead author Cheryl Carmichael in a University of Rochester news release.

As eager as Raleigh, North Carolina, native Sarah Keller was to begin studying business and marketing at the University of Pittsburgh, the freshman also wanted to have friends.

Through numerous Chabad on Campus events, Keller has met new people as well as participated in reduced-attendance Shabbat or holiday meals and coffee dates.

“I’m not a big group person, and I didn’t fully know what to expect with corona, but this is definitely not a bad experience,” said Keller.

She has not yet taken an in-person course — classes are offered synchronously on Zoom — but that hasn’t been much of a detriment, explained Keller: “You get to make your college experience what you want it to be. Even with corona, I decided it would be a good year, and so it has been.”

In the two months since Carnegie Mellon University’s fall semester began, freshman Ariel Bernhard, a native of Rochester, New York, has been on campus for only two weeks. Before coming to campus for in-person instruction, she quarantined for two weeks at a family friend’s apartment in Pittsburgh, completed regular health assessments and took a COVID-19 test.

Bernhard wasn’t supposed to be on campus this semester — in order to ensure limited capacity and fairness, the Oakland-based university offered most students a chance to enjoy on-campus housing either during the fall 2020 semester or the spring 2021 semester. But when she wanted to better understand lighting design and use of the university’s tension grid, she worked with the School of Drama to create a safe way to learn in person for a limited period.

Now back in Rochester and taking classes on Zoom, Bernhard praised CMU for allowing her to briefly learn in person, and for the university’s treatment of students during the pandemic.

“CMU is doing everything possible to give us an equitable education,” said Bernhard.

Even so, there are inherent difficulties with intensive online study.

“I got blue-light glasses to avoid the headaches, but those are still a thing,” she said. 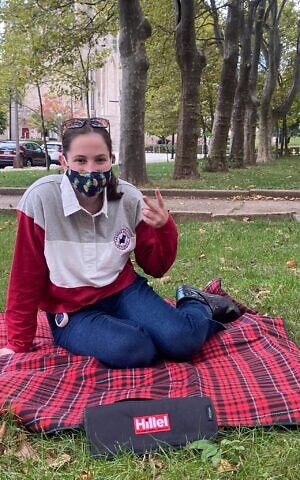 Creating social connections is also challenging. There’s an oddness to limited digital engagement, so during her two-week stint on campus Bernhard met up with different members of Hillel JUC.

“That community is important to me and I wanted to develop those connections,” she said.

“I know it’s not the same, but at least it’s something,” she said.

Coming from Indiana, Pennsylvania, Jorie Meil had certain ideas of what freshman year at Chatham University would look like. For starters, there would be opportunities to engage with more than a handful of Jewish students — Meil said there were only two Jewish students in her high school.

What Meil has discovered is that college is not like anything she’d imagined.

Because of Chatham’s small student population, Meil attends in-person classes as well as those online. Given the setup, Meil has to remind herself which aspect of the hybrid learning format she’s engaging with that day. Generally, though, the experience has been valuable as it has brought students together, albeit at a safe distance, she said.

“It’s definitely a challenging situation and not quite something we were all necessarily looking forward to — at times it can be a little disastrous — but overall, it’s something we’re all going through together and will make us stronger,” said Meil.

As part of a communications course, Meil interviewed fellow freshmen about the challenges of transitioning to college life, and later wrote a story on the attitudes and experiences of first-year students during a pandemic.

“I found that most people were optimistic, and that they were just doing their best one day at a time figuring things out,” she said.

As for her own sense of freshman college life, Meil said her feelings are pretty consistent with her findings.

“This has given us a sense of responsibility,” she said. “I check my email more than I used to, and I’m learning how to form online relationships not only with friends but with faculty and advisors. It’s definitely given me a new perspective on things.” PJC