In the two years since COVID-19 was declared a pandemic, Lawrenceville resident Jesse Irwin has clung to a particular term — “sonder.”

The neologism, which is defined by The Dictionary of Obscure Sorrows as “the realization that each random passerby is living a life as vivid and complex as your own,” was a perfect way to appreciate so much of what’s recently transpired, Irwin explained. Before the pandemic, Irwin, 28, was living in Pittsburg, Kansas, and working as a morning anchor and features producer for KOAM-TV. When March 11, 2020, arrived, and the World Health Organization declared COVID-19 a pandemic, Irwin transitioned, like countless others, to remote employment.

Despite setting up an in-home studio, Irwin missed “the environment and affirmation of coworkers,” he said.

As Irwin proceeded to perform the extrovertive duties of an on-air personality, he was introduced to the word “sonder,” and quickly began thinking about not only the people he regularly interviewed, but his colleagues and even strangers,” he said. “Human interaction was something we took for granted.”

Lawrenceville resident Jen Hoffman said that, like Irwin, her boyfriend, she too learned much about herself during the past two years.

“I learned the power of a routine and not being afraid to fine-tune or adjust the routine as you evolve,” she said.

Hoffman, 27, said that one of the ways she managed the early days of the pandemic, while living in Pittsburg, Kansas, was by taking long walks and listening to podcasts, including “Conan O'Brien Needs a Friend,” “Armchair Expert” and “The Daily.”

There’s a “transformative power” to heading out for a prolonged period and listening to a program, she said. “It can do wonders for your mental health and your interpersonal relationships.” 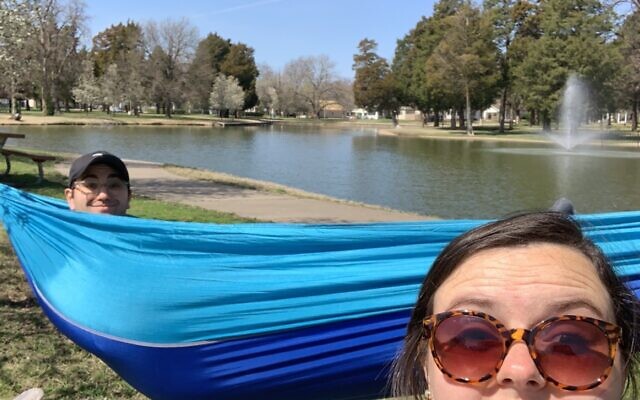 Now that two years have passed since the pandemic started, Exler, 31, said he’s had plenty of time to understand how even the smallest get-together can reap the most significance.

Whether it’s meeting someone for a drink, going to Shabbat services at Tree of Life or hosting a Shabbat dinner, Exler said he’s “definitely learned to appreciate those moments so much more.”

Welcoming in more recognition has also helped Exler prepare for what may be the biggest moment of all. Just before the pandemic began, he and his girlfriend, Kari Semel, got engaged.

Though the couple was set to marry in 2021, they pushed it back to this summer.

Exler said the couple considered having a smaller ceremony amid the pandemic but decided to wait for a chance to celebrate beside so many of their loved ones.

Whereas the pandemic allowed pausing in her personal life, certain things at work are just “not worth the wait,” she said.

Semel, 28, is the incoming assistant director of Hillel JUC and cited the Jewish holidays as occasions that are impossible to postpone.

“We can’t wait three years to have a seder, or to introduce our students to Israel on campus, or to Birthright, or Onward Israel,” she said.

What that means, she continued, is being creative, moving forward and getting down to “the bones of it all.” 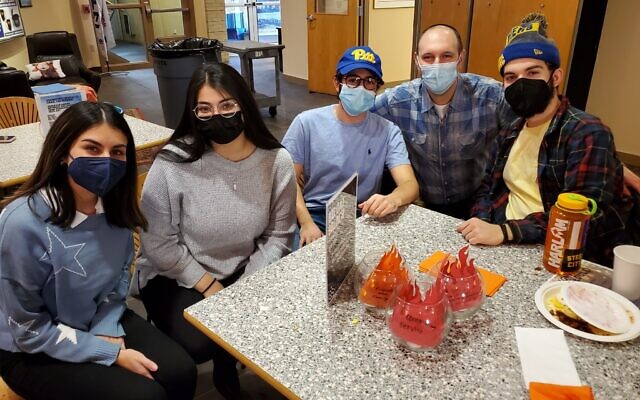 What makes Passover special for students on campus is realizing that in certain situations having 300 people in a building together will be the right decision; but other times, like last year, creating spaces and opportunities for even three students to gather around a table will be the best experience Hillel JUC can offer, she said.

Understanding the value of community is one of the biggest lessons former Shadyside resident Jacquelyn Lazo gleaned from the pandemic. Lazo, 40, lives in Charlottesville, Virginia. Two years ago, Lazo’s daughter Emma was just turning 1. And as a new mother, Lazo tried to create a peer group with other parents of similar-aged children. She reached out to friends of friends and slowly started building a network, but when the pandemic arrived “that all went away,” Lazo said.

The former Pittsburgher and communications professional, who’d done work for Save the Children US, told the Chronicle that she “needed a lifeline” and thought about writing a children’s book. Lazo began having conversations with other parents and quickly decided to author a different type of text.

Alongside Dr. Frank DePietro, an assistant professor of psychiatry at the University of Pittsburgh School of Medicine, Lazo wrote “Comeback Kids: A pocket guide to post-pandemic parenting.”

The self-published work includes responses from approximately 70 children, ages 4-18, on questions including, “What are three words to describe how you feel right now; When you think about going back out into the world, what things make you nervous or scare you; and, In what ways have you seen people help each other during quarantine.”

Lazo said she learned how much children “echo what they hear at home.”

She said she came to appreciate — both from co-writing the guide and speaking with parents after its publication — not only the importance of personal resilience but realizing the strength parents can give each other.

When the pandemic began, Lazo said she was searching for a community. Two years later, she said found it by writing and speaking with fellow parents nationwide. In many ways, Lazo’s efforts brought her back to where she started, as she has recognized a difference at home, she said. “I feel like I have a new appreciation of the moments I spend with my daughter.”

Almost two years ago, Lazar heard a lecture from a rabbi in which the speaker asked whether people will leave the pandemic the same way they entered. Lazar said that in that moment she decided to become more cognizant about making blessings.

Nearly 24 months later, Lazar is still carefully reciting words and offering thanks for various matters in her life.

Adopting this practice has led to a greater belief that “God runs everything,” she said.

Having this awareness feels good, Lazar continued, but what feels even better is knowing “I took upon myself another mitzvah.” PJC