Kara Reilly gave birth to her daughter Lydia 15 months ago. With pregnancy behind her, Reilly faced the postpartum reality of child-rearing in the midst of COVID-19.

Between the pandemic and having a baby, Reilly said, time felt completely reshuffled. While Friday nights were once a chance to dine with friends, grab drinks or socialize, now days and evenings started blending into one another. As the pandemic stretched on, Reilly and her husband, Brendan, spent more time at home as a family.

It was nice, she said, but what helped separate time was Shabbat.

Recently, the Reillys traveled from their house in Wexford to Kara’s brother’s home in Franklin Park to welcome the Sabbath as an extended group. The evening was inspired by Shabbat Shelanu, a Friday morning program on Zoom sponsored by Jewish Federation’s Young Adult Division and PJ Library. Shabbat Shelanu began as a 13-week pilot program last spring. During the one-hour sessions, the Reillys and a cohort of nine other families, whose children were 3 years old and under, joined together online, made projects, sang songs and ate.

Prior to each gathering, participants received a box containing challah, crafts and activities corresponding to that week’s theme, according to Federation staffer Carolyn Slayton.

Susannah Glick, of Moon Township, who participated in Shabbat Shelanu with her son Judah, praised the boxes they received through the program.

“They were definitely part of our weekly routine,” Glick said.

Each Thursday evening, Glick and her son would open the package, “so he could become familiar” with the contents prior to the following morning’s Zoom session, she said.

Like the boxes, which contained toys, art supplies, musical instruments (and of course, challah), the entire Shabbat Shelanu program was well-planned, Glick said.

In addition to allowing the kids to see each other on Fridays, several virtual parent-only nights were scheduled during the 13 weeks.

Raising a child during the pandemic is “just an experience,” Glick said, and the post-bedtime meetups were a chance to socialize.

“For me and my husband, we hadn’t seen most of our friends in person, so to be able to see people, even over the computer, was essential to building a community,” Glick said. “It was nice to know we weren’t alone.” 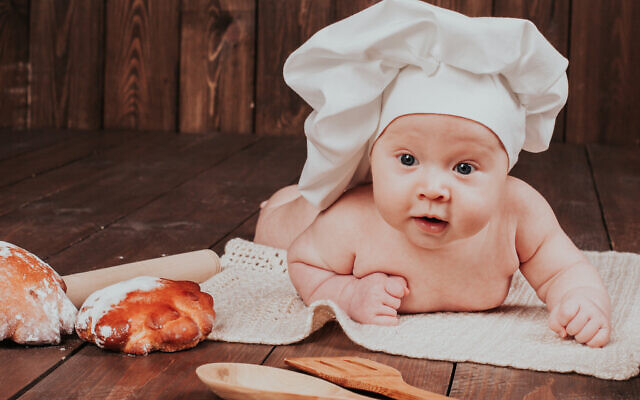 A baby and challah. Photo by DmitriiSimakov via iStock

Neil DiBiase and his husband, Chris Smith, participated in Shabbat Shelanu along with their son Noah.

Like Glick, DiBiase found the program to be a helpful tool during a trying time.

“I think that as a new parent and raising your first child, especially during COVID, it can be really isolating and certainly not the environment we envisioned when we thought about being new parents,” DiBiase said. “Having a program that provided education, a social network and outlet to other parents was something we were missing.”

Shabbat Shelanu offered many benefits, DiBiase continued. “So much became a gray area during COVID, the lines were really blurred and it didn’t seem like there was a lot to tether you to,” he said. “For us as a family, Shabbat Shelanu was kind of the ritualized element of having something to do at the same time every week.”

Hours after Shabbat Shelanu finished, DiBiase and his husband welcomed their extended family for a Shabbat celebration.

“It was nothing fancy or formal, we just picked up challah and a bottle of wine,” he said.

Each week, alongside his sister, Kara Reilly, and her husband, Brendan, DiBiase and his husband, Chris, lit candles and paused.

Marking Shabbat was a way for the group to differentiate time and “take a collective breath,” DiBiase said.

Months have passed since the first cohort completed the Shabbat Shelanu pilot program — Slayton said a new and larger group is now participating — and the DiBiase and Reilly extended clan is still gathering each Friday night to welcome Shabbat.

“It’s become something really important to our family,” DiBiase said.

The program left a similar mark on Glick.

“Before Shabbat Shelanu, my husband and I could probably list the times on one hand that we lit the Shabbat candles,” she said. The program offered “a little push, or a reminder, that Shabbat was a way to bring my family together at the end of a busy week.”

Glick recalled that during one Friday morning session her son made a pair of candlesticks. Since Judah completed that craft and the program concluded much has changed. Glick and her husband have been vaccinated. Her friends have been as well. Many of her peers have resumed activities like going out on Friday nights, but Glick and her family have not.

“Judah is just so proud of these candlesticks that he made,” Glick said. “We kept doing Shabbat.” PJC