School had moved online because of the pandemic and extracurriculars were largely non-existent. As 2020 rolled along, each day seemed to stretch into the next. Even Shabbat — when Jacob typically saw many of his friends at Congregation Beth Shalom — felt swallowed up by COVID constraints.

So Jacob and his friend Eli Kranjec got together with a small group of other kids from Beth Shalom and made a plan to reclaim their Saturday afternoons: Instead of sitting at home and feeling isolated, they decided that Shabbat would be a time for Dungeons & Dragons. Eli, 13, the oldest of the group, would become the dungeon master in the tabletop role-playing game.

Dungeons & Dragons was created in 1974. Since then, 50 million people have enjoyed the popular fantasy game, which encourages players to create their own characters and engage in various adventures.

Eli was first introduced to Dungeons & Dragons as a student at Community Day School.

It’s a fun role, Eli said, with “a lot of behind-the-scenes work.” The dungeon master writes the story, sets the rules and asks others to explore, he said. “You’re sort of like the God of the world. I enjoy it more than being a player.”

Eli quickly took to being a dungeon master and parlayed it with another pandemic-related diversion: painting.

“I had a lot of free time,” he said. “It was quarantine, I needed a new hobby and I wanted to get into art.”

So along with creating an imaginary world for his Dungeons & Dragons-playing friends, Eli the dungeon master painted miniatures of monsters, complete with spikes and other menacing features to help everyone visualize the scene.

As the weeks went on, Eli took his role more seriously. So did the players.

Although the dungeon master largely sets and interprets the rules of the game, players create their own characters by determining different factors, such as strength, constitution, dexterity, intelligence, wisdom and charisma, as well as species, class and moral outlook. Players’ choices, along with the use of a polyhedral (multi-faced) die, help set the game’s course. 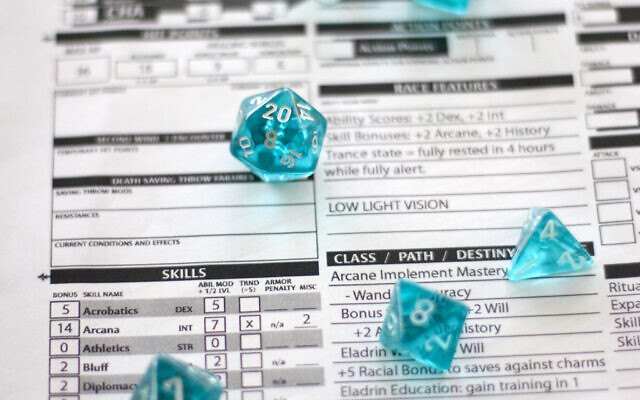 Character sheet and dice. Photo by emigee via iStock

Although Dungeons & Dragons relies on role-playing, there’s also a fair amount of writing involved. This presented a problem: The kids typically met up Saturday, and they weren’t comfortable writing on Shabbat.

“We all wanted to play Dungeons & Dragons,” Eli said. “And I wanted everyone to feel like their beliefs were respected…We had to come up with a collective solution that didn’t involve breaking beliefs.”

So the group chose to focus more on the role-playing aspects of the game than the combat, which typically involves writing. And so when the kids played outdoors at each other’s homes on Saturday afternoons over the course of the pandemic — sometimes in 27-degree weather, Eli’s mother said — Shabbat became a time for imagination, exploration and fostering friendship.

“It was so sweet,” she said, recalling how the kids would roll up on their bikes, set up the game in the backyard and offer individual snacks. “It was wholesome, COVID-safe and organized by the kids themselves. They were totally in charge.”

Like Eli and Jacob, school was online most of the year for many of them, and this was one of the few social outlets available to them. And this group offered a mix of ages and genders.

Although the kids met almost every week throughout the pandemic, their last get-together was in June. At that point the world seemed to be returning to normalcy. Scheduling became more difficult. Extracurriculars returned. Families took vacations. Kids went to camp.

“The pandemic kind of made it possible for this to happen because they didn’t have anything else going on,” said Danielle Kranjec. “No one was going anywhere.”

Jessica Hammer, a Beth Shalom member and an associate professor of learning science at Carnegie Mellon University, said she was fascinated, but not surprised, to learn of the kids’ activities.

Whether it’s Dungeons & Dragons or other games that bring people face-to-face, powerful experiences can result — especially during an experience like COVID, she said. Games like Dungeons & Dragons provide a way “where we can be together from six feet apart,” share an imaginary world and build relationships.

Hammer holds joint appointments at CMU’s Human-Computer Interaction Institute and Entertainment Technology Center, and as part of her research she investigates how games can facilitate difficult conversations, including those dealing with morality and ethics. Because players invent a world together as they play, they end up showing different parts of themselves and their beliefs to people “who may already know you, but not know you that way,” she said.

This is critical in this day and age, continued Hammer, as COVID has negated so many opportunities for meaningful social interactions. Because of their design, role-playing games can not only help people form new friendships and understandings, but can also help sustain “long-standing relationships through a period that I think is very hard on all of us,” she said. 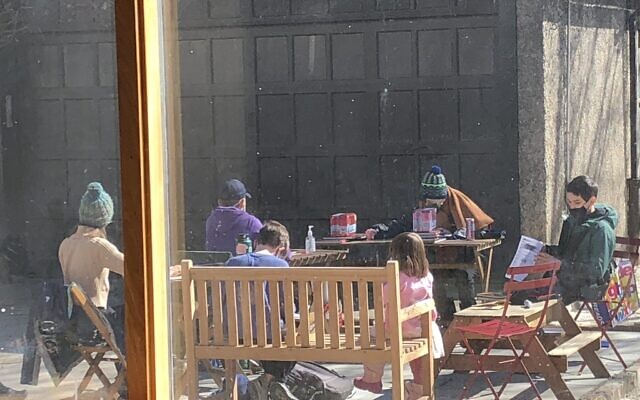 Kids play Dungeons and Dragons in the Kranjec backyard on March 14, 2021. Photo by Danielle Kranjec

When school ended this year, Squirrel Hill resident and Beth Shalom member Shoshanna Barnett scrambled to find an activity for her 7-year-old son, Ari Barnett-Jolson. She signed him up for Dungeons & Dragons classes. Ari quickly took to the game.

“It was awesome,” he said. “We get to go on an adventure. We battled monsters. We did puzzles. All sorts of fun stuff.”

Hammer has a 6-year-old daughter who was also just introduced to Dungeons & Dragons, said there’s something special about the weekly Shabbat game. In particular, she said, it’s meaningful to spend time with others who hold similar values; Hammer speaks from experience, as she remembered being excluded from joining role-playing games when she was younger because she would not write on Shabbat.

“Hearing about this shomer Shabbat group,” said Hammer, “makes me think that my daughter can have a different experience with being a Jewish role-player than I did.”

Ari Barnett-Jolson didn’t think much about the moral heft of a Sabbath-friendly Dungeons & Dragons clan. When asked whether he’d be interested in joining, Ari offered a practical outlook based on pandemic experiences.