There are a lot of losers in youth sports. That’s why the JCC Maccabi Games instituted the Rachmanus Rule, which calls for players, coaches and spectators to embody Rachmanus (compassion) and emulate what the Talmud considers godly characteristics.

The rule was an outgrowth of a mismatched sporting event, typified by poor sportsmanship and a competing desire to combat the obdurate decisions of adults. In 1984, members of the Pittsburgh JCC Maccabi basketball team traveled to Detroit. The Pittsburgh squad faced a larger, more talented group, from Baltimore. As the game developed, it became clear that the Pittsburghers had no chance of winning.

Lenny Silberman, the Pittsburgh delegation head, told the Chronicle that he asked the opposing coach to demonstrate a little compassion. Silberman was rebuffed and the Baltimore team, though greater in talent and size, continued pressing and running up the score.

The absurdity of the experience climaxed when Pittsburgh’s David Levine was pitted against a significantly taller opponent. Despite the disparity in height and ability, Levine refused to concede and continued battling on every play.

That relentlessness and unwillingness to fold established who the clear winner was that day, Silberman noted.

The 1984 Maccabi Games ended. The players returned to their respective cities. Ten years later, Silberman took a job with the JCC Association of North America, becoming the continental director of the JCC Maccabi Games. In that position, Silberman was given the platform to change the tenor of the Maccabi Games.

During the next five years, he worked to infuse the youth sports experience with a spirit of Rachmanus. While winning remained a valued goal, demonstrating compassion and sportsmanship became similarly estimable aims.

The Rachmanus Rule is now a two-page document stipulating expectations of players, coaches and spectators at the Maccabi Games.

“Rachmanus includes displaying good sportsmanship, respecting your opponents and the officials, and exhibiting appropriate behavior are also important components of Rachmanus,” according to Maccabi Games materials. “The level of competition at the Games varies considerably due to delegations from varying city size and delegations fielding teams with younger players. Although several sports have mercy rules, blowing out a much weaker team for the sake of scoring points or getting runs across the plate is contrary to the spirit of the Games and shows a lack of rachmanus.”

The Rachmanus Rule, according to Mallinger, makes the Maccabi Games a more enjoyable experience for everyone involved.

“It’s no fun for kids from a small city to get blown out by 60 points,” he said. “With Rachmanus, it’s just more fun.” 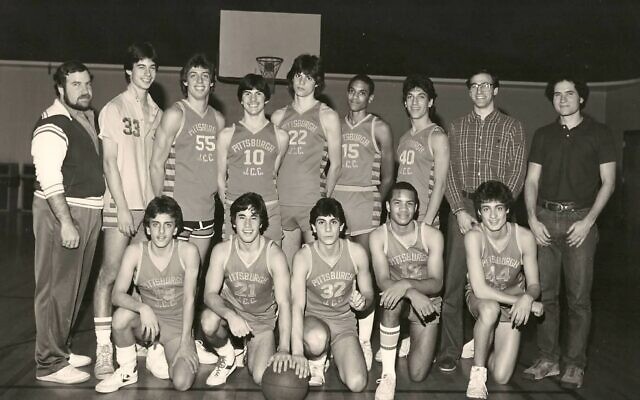 Mallinger retired from the Jewish Community Center of Greater Pittsburgh in November. His departure spurred former athletes, their parents and Mallinger’s colleagues to lavish praise on someone who embodied the best of the Maccabi Games experience.

“For decades, Alan has been a treasured and valued leader, exhibiting deep passion and commitment to ensure the success and continuity of the JCC Maccabi Games — one of the greatest Jewish peoplehood building projects of our time,” Samantha Cohen, vice president of programs and talent management for the JCC Association of North America told the Chronicle. “As a parent of three JCC Maccabi athletes and a longtime coach and delegation head, we will forever be grateful for the key role that Alan played in ensuring that thousands of Jewish teens from Pittsburgh and across the globe have had the opportunity to create lifelong friends, strong Jewish identity, and experience the transformative magic of JCC Maccabi.”

Jason Kunzman, chief program officer at the Jewish Community Center of Greater Pittsburgh, told the Chronicle his understanding of Mallinger's relationship to the Maccabi Games solidified in 2017.

Kunzman had just accepted a position with the Jewish Community Center and traveled to Albany, New York, for the Maccabi Games with the Pittsburgh delegation.

“What I saw was remarkable: the way ‘Mal’ moved from venue to venue; the way he handled each and every situation that was brought to his attention; and, quite honestly, the red carpet treatment, the way he was treated by colleagues around the country and the world, was truly amazing,” Kunzman said. As a parent whose child was competing in his first Maccabi Games, “I had this unbelievable sense of calm and comfort knowing that [my son] and the rest of the delegation was being tended to by the love and compassion by Alan Mallinger.”

Because of the pandemic, last summer was the first opportunity for Pittsburghers to return to the Maccabi Games.

Kunzman told the Chronicle that those years away from the Games afforded perspective.

Online programming, vaccine clinics and countless activities for seniors and youth reaffirmed the JCC’s commitment to the community during trying times.

More recently, however, there was a push to “get back to basics,” Kunzman said.

Staffers began considering the relationship between the Maccabi Games and the Jewish Community Center of Greater Pittsburgh.

In answering that question, JCC staffers leaned on the legacy of their beloved former colleague.

“We came up with an award, and who better to name it after than one of our most tenured employees, someone whose pride and love was Maccabi during his career at the JCC,” Kunzman said.

Weeks ago, members of last summer’s Maccabi Games delegation gathered inside the gym at the JCC’s Squirrel Hill branch.

An announcement was made that moving forward, each year, a player from the Pittsburgh delegation who best embodies the spirit of sportsmanship and compassion will be recognized with the Alan Mallinger Rachmanus Award.

“It was totally unexpected, and I'm humbled by it,” Mallinger told the Chronicle. “Maccabi is very meaningful to me, and Rachmanus is really a part of that.” 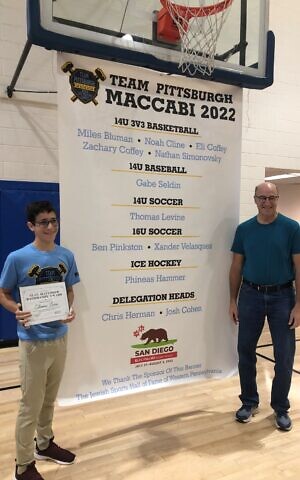 As the award was announced, a young athlete from Squirrel Hill stood beside Mallinger. The teenager, Thomas Levine, traveled to San Diego and used his time at the Maccabi Games to not only compete in soccer, but aid delegation heads and be a role model to the youngest members of the Pittsburgh group.

Upon receiving the Alan Mallinger Rachmanus Award, Levine, 14, told the Chronicle, “I feel a big sense of pride that this legend is with us in this beautiful award and that [his name] carries on through everything that Maccabi and the JCC does. I think it’s really special.”

“When they told us Thomas was going to win this award it was really fitting,” Levine’s mother Dory Levine (a former Maccabi Games participant) told the Chronicle. “He went out of his way to make his teammates feel like a team. He really made everybody feel special.”

There was another reason why winning the award was meaningful.

Thirty-eight years before it was presented, Thomas Levine’s father, David Levine, played in the Maccabi Games. Now a successful business owner and an active community member, David Levine was once a diminutive teenage basketball player who faced a larger, more talented opponent and recognized that winning and losing isn’t always tallied by the score.

The Maccabi Games, and youth sports in general, have an incredible ability for individuals to step up and demonstrate integrity, sportsmanship and compassion, Silberman told the Chronicle.

“I was honored to be with David and Dory in San Diego last summer watching Thomas play soccer. We were sitting on the sidelines and the story of the Rachmanus Rule came up,” Silberman said. “When I think about the journey of David to Thomas, it has really come full circle, and to have Mal’s name on the award, it’s Mal’s DNA. It’s what Rachmanus is all about.” PJC