At tables worldwide, Passover celebrants recite the Haggadah’s words: “In each generation, a person is obligated to see themselves as if they left Egypt.” But that’s far from the only tradition Pittsburghers will be continuing this year. Throughout the area, locals undertake quirky customs, eat cherished dishes and reminisce about Passovers long ago.

Each year, for the past 15, Goldman has decorated her table with stuffed animals, plastic bugs and eye masks to correspond to the 10 plagues. Whether people throw cotton balls to demonstrate hail, or shield their eyes to acknowledge darkness, the items all help tell the Passover story, Goldman explained.

In years past, Cantor Michal Gray-Schaffer of Congregation B’nai Abraham in Butler used a set of toys at her seder.

“Half of them are broken, and everybody groans when I bring out the bag of plagues, but I have to use them,” she said.

It’s schticky, but at least it’s not sticky, Gray-Schaffer explained, as one year she used a plate of scallions to symbolize the whips that the Egyptian overlords slapped against their Hebrew slaves.

“My kids thought it was the best thing ever, but for weeks I was cleaning green slime underneath the table, off the floor,” she said. “It landed in places all over my dining room. My kids liked that too much. We only did that tradition one year.”

Despite a cleaner seder this year, Gray-Schaffer, said there is one tradition she’s thinking of picking up.

“For years, I have had a package of nail decals of the 10 plagues,” she said. She bought them more than a decade ago, but amid seder prep she always forgets to bring them out.

Perhaps this will be the year to press on a new tradition, she said. “I want to finally use my 10 plagues nail art.” 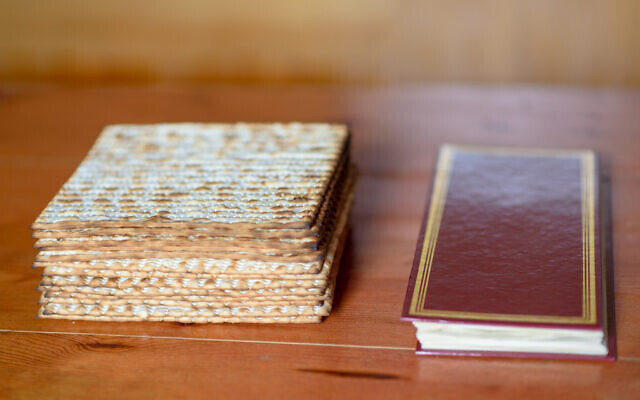 Matza and Passover Haggadah. Photo by Inna Reznik via iStockphoto.com

Whether it’s reading the story of the exodus in Tanakh, watching “The Prince of Egypt” and “The Ten Commandments” and comparing how closely each film mirrors the biblical text, or baking matzah with Shaare Torah Congregation’s Rabbi Daniel Wasserman, Avishai said she tries to make the holiday as meaningful for her family as possible.

One activity that helps her children appreciate the perils of ancient life is accomplished with Play-Doh and green onions. While Avishai’s children create structures out of soft modeling material, her husband acts like an Egyptian taskmaster and destroys the work while “whipping” the children with the soft vegetables, she said.

Another reenactment the family performs is wrapping up matzah and transporting it throughout the dining room. While the children carry the matzah, Avishai and her husband ask the kids where they are going, where they are coming from and what they have to eat.

Because of the memories it spurs, Rabbi Elchonon Friedman of Greenfield can’t wait to read a specific portion of the Haggadah — within the text, in its discussion of the four sons, the Hebrew word “echad” proceeds each son’s description.

Friedman said his father always pronounced the word “echad,” which means one, with the same tone people typically use when they recite the Shema, which also ends with the word “echad.”

His father inflected “echad” in the Haggadah, like “echad” in the Shema because “God’s oneness is within every child,” Friedman said, and it doesn’t matter whether that child is wise, wicked, simple or doesn’t know how to ask a question.

Oakland resident and Holocaust survivor Judah Samet, who plans on celebrating Passover with family, said the holiday will be a bit different from what he remembers as a child in Hungary.

“At the end of the seder, we would dance. We sang ‘Hatikva,’” Samet said.

Just around midnight as the pre-war seder concluded, and the dancing and singing came to an end, Samet and his grandfather would walk about five kilometers to see Rabbi Aharon Rokeach, the Belzer Rebbe, he recalled. When they entered the room where Rokeach was sitting, his grandfather was always asked to sit next to the leader of the Belz Hasidic dynasty.

“They were childhood friends,” Samet said.

Squirrel Hill resident Josh Swedarsky will finish his seder with a song. This year, as he and his family have done for the past 20 years, the Swedarskys will sing “The Little Green Frog Song.”

The Swedarskys typically finish their seders around 1:30 a.m., and the reason why they don’t belt out the tune earlier, during the Haggadah’s recounting of the 10 plagues, is because it would be a bit uncouth, Swedarsky explained: “It’s a frog song, but it’s not sederish, so it’s at the end.”

During one of the final meals of the holiday, Gelman serves her family syrniki, a fried-in-butter thick cheese pancake that’s made with farmer’s cheese or cottage cheese, eggs and matzah meal. The syrniki is accompanied with homemade strawberry jam.

Gelman said her father always loved his Lithuanian great-grandmother’s cooking and eventually decided to replicate the dishes. Although year after year Gelman’s parents tried to make syrniki, Gelman’s father always insisted it didn’t taste right. Then, about 40 years ago, Gelman’s parents stopped making syrniki with flour and decided to substitute matzah meal. That’s when he realized it finally tasted like the way his great-grandmother would make it, Gelman said.

For the past 25 years, Gelman has cooked the dish for her family, and said this Passover won’t be any different — after all, it’s tradition. PJC