Long before the Fern Hollow Bridge collapsed several weeks ago, the weekly status of Pittsburgh’s eruv was uncertain at best. Once the bridge fell, however, the eruv — a wire and string structure, often hanging from poles, that creates a private enclosure and permits Jewish people within its boundaries to carry during the Sabbath — was getting increased attention from segments of the community.

Heading into Shabbat on both Jan. 28 — the day the bridge collapsed — and Feb. 4, Congregation Poale Zedeck’s Rabbi Daniel Yolkut attempted to allay congregants' concerns by alerting them that the eruv was intact.

“Baruch Hashem,” Yolkut wrote in a Jan. 28 email, “I am thrilled to announce that the Eruv WILL be usable this Shabbos! A tremendous thank you to Rabbi Silver and Rabbi Admon for their quick action!”

One week later, with less than two hours until Shabbat started, Yolkut repeated the message about the eruv’s fitness, writing, “After a lot of work in very challenging weather, coordination with the appropriate agencies and finding the right machinery, Rabbi Silver and the Eruv checkers have successfully made everything work!”

Though the recent bridge collapse is drawing additional attention to the eruv, there’s nothing new about the structure’s fragility, according to those with knowledge of its construction.

Rabbi Shimon Silver who, along with overseeing the eruv, serves as Young Israel of Pittsburgh’s spiritual leader, said the eruv always requires attention and that it doesn’t take a fallen bridge to fracture it; the smallest event can bring it down.

Because many of the wires and strings that create the enclosure are affixed to pieces attached to telephone poles, if a car bumps into a post, a branch falls after a heavy snow, or even a large storm occurs, the eruv can break, Silver said. 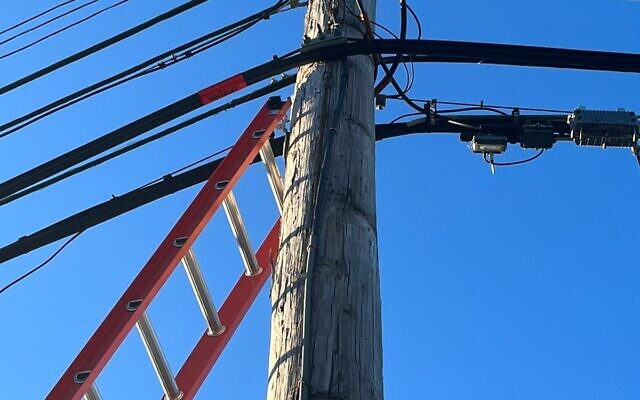 A ladder is placed against a telephone pole prior to eruv maintenance. Photo courtesy of Rabbi Eli Wilansky

Despite its constant maintenance — on Thursday mornings, Silver and two other rabbis each spend about 90 minutes tracing the route and checking to ensure the structure is sound — the amount of work varies.

“Sometimes, we have no repairs, and then the next week it’s 10 repairs,” Silver said. “It’s unpredictable.”

Rabbi Eli Wilansky of Greenfield checked the eruv on Feb. 10. Along with transporting a ladder, Wilansky brought a hammer, wire cutters and other small tools.

The materials were enough to fix certain areas where a string had snapped. But maintaining the eruv becomes more challenging and costly when it requires professional attention, Wilansky said.

Chaim Cowen, a licensed electrical contractor, has worked on Pittsburgh’s eruv for approximately seven years. Most fixes, he said, take only an hour. The more complicated ones, however, can take four or five hours and require the use of a bucket truck.

Cowen, a Greenfield resident who founded his own company last year, doesn’t own a bucket truck, so he rents one from his previous employer, Valley Electric Co., when repairs require climbing poles as high as 35 feet.

Cowen said he happily performs the repairs at a discounted rate on behalf of the community, but that the work is neither glamorous nor lucrative.

When Cowen is called in, he’s often subject to freezing temperatures or other inclement conditions. Last week, he hiked down a snow-covered hill in Frick Park to reach an area of the eruv that was disturbed by the bridge collapse. Other times, such as when repairs are required to the part of the eruv spanning Baum Boulevard near Shadyside, he heads out at 5 a.m. to avoid traffic.

“And even then there’s traffic,” he said.

In these types of cases, costs can accumulate because apart from the materials needed to repair the eruv, and the expense of renting a bucket truck — according to Herc Rentals, a 38-foot diesel bucket truck in Pittsburgh costs $650 per day — someone has to be hired to direct traffic below while Cowen is three stories high working on the eruv. 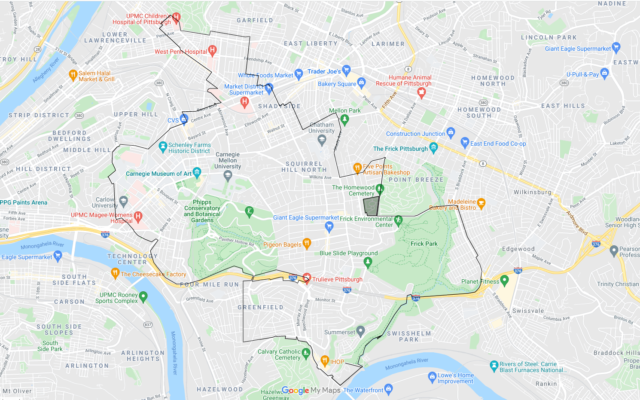 Screenshot of the Pittsburgh Eruv via Google Maps

Wilansky said he wishes Pittsburghers were more aware of the expenses needed to keep the eruv functioning.

Writing from Israel while on sabbatical, Shaare Torah Congregation’s Rabbi Daniel Wasserman informed congregants that after the Jan. 28 bridge collapse it was “not a miracle” that the eruv remained intact but actually a concerted effort, and that it took “dedication” from several individuals to keep the structure usable.

Wasserman mentioned the time and various expenses needed to keep the eruv functional and implored congregants to “send in your Eruv contribution next week.” The requested donation is $1.75 a week.

“I know everybody doesn’t use the eruv 100%, but typically people benefit from it one way or the other,” Cowen said. “People should try not to take it for granted because without the proper funds it’s hard for it to stay up.”

Wilansky noted that when he and his wife moved to Pittsburgh five years ago they were thrilled that the city had an eruv.

Neither Montreal, where he grew up, nor Crown Heights, where his wife was from, had an eruv, so the fact that Pittsburgh had one enabling them to bring items to friends’ homes or push strollers on the Sabbath was “amazing,” Wilansky said.

A lot of people benefit from the eruv, and although there are plenty of individuals who don’t use it, “it’s important to get involved,” he added.

Silver, who’s worked on the city’s eruv since 1990, said that in addition to donations, he’s always looking for people to perform regular eruv checks.

This is something that may be appealing to people who like to be outdoors, he added, because although certain portions require one to drive along the route, other parts of the eruv can be traced while walking or jogging.

Silver said he’s happy to offer interested people the requisite instruction — it only takes a few hours — and that for those seeking to undertake a new Jewish practice, checking the eruv is a relatively easy act.

“It’s not like schechting (slaughtering meat),” he said. PJC