Six months ago, Squirrel Hill residents Claire Topal and Robert Lin, like many other people worldwide, made several donations to help Ukrainians after Russia’s Feb. 24 invasion.

For the first time in their lives, though, the Community Day School parents felt like “we should really do something tangible,” Topal said.

Weeks passed. The couple scoured the internet. Lin discovered Uniting for Ukraine, a program launched by President Joe Biden on April 21 offering up to 100,000 fleeing Ukrainians a “safe and orderly” means of entering the United States and remaining for two years of parole.

People in the U.S. wanting to help Ukrainians through the program file paperwork with U.S. Citizenship and Immigration Services; they are then vetted by the U.S. government to ensure that they meet eligibility criteria.

Lin recognized the program’s strengths and his family’s ability to meet its guidelines. He logged onto Facebook and found a group pairing Ukrainians with U.S. hosts. He spent hours researching the next steps. He then told Topal that he’d found a family in need and was setting up a Zoom call to speak with them the next morning.

Topal was a bit apprehensive: “I was like, ‘I don’t meet people on Facebook. That’s sketchy, right?’”

Lin reassured her that he did his due diligence, and said, “these people are awesome.”

Messages between the Pittsburghers and Ukrainians were exchanged and a time to meet on Zoom was finalized. When the hour arrived, Topal said, both parties were trying to assess each other’s legitimacy.

Lin and Topal’s two children were in the background. Katya and Andrew (the Ukrainian couple who Lin found on Facebook) held their nearly 1-year-old daughter, Diana.

“You could just see how sweet they were as parents,” Topal said of Katya and Andrew.

More Zoom calls transpired. Additional messages were exchanged. Lin and Topal filed the necessary paperwork with the U.S. government. Katya and Andrew were vetted. The Ukrainians were approved. Lin and Topal helped Katya, Andrew and Diana secure flights. Finally, on June 22, Topal met the young family at the Pittsburgh airport.

“After I saw Claire, I felt like we are at home,” Katya said, while seated beside Topal on an outdoor couch in Squirrel Hill. “We are with our family now.”

Temporary housing in someone else’s home

Since late June, Katya, Andrew and Diana have lived with Lin and Topal. The two mothers spoke highly of each other and the love their children share. The experience has created new friendships and offered cultural insight — Katya now makes “Jewish borscht,” which she described as replacing pork with chicken — but the Ukrainians and Pittsburghers both know the housing situation is temporary.

On Sept. 1, Katya, Andrew and Diana are moving to an apartment.

Topal said she’s sorry to see the perpetually upbeat family go, but acknowledged that “it’s hard to be in someone else’s house.” 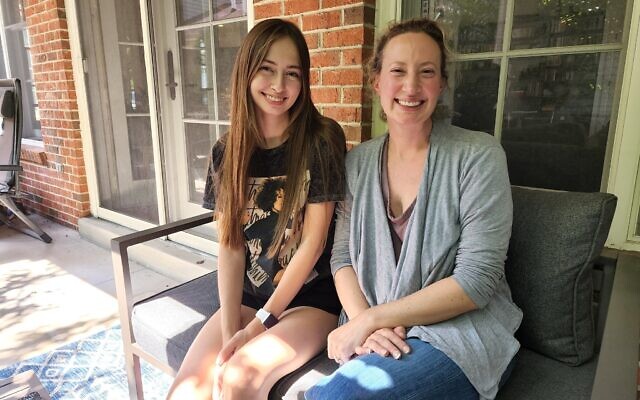 Katya, 25, is an internal medicine doctor and worked as a hospitalist in Ukraine. To obtain a comparable job in the States, Katya would need to complete three medical licensing exams, an occupational English test and a three-year residency. Her parole status through Uniting with Ukraine ends in June 2024. She and her family would like to return to Kharkiv, where their friends and relatives remain. In the interim, Katya said she may work as a research assistant or clinical researcher — assuming the necessary paperwork goes through.

“The system just does not set people up for success,” Topal said. “No matter how on top of it you are, everything just takes so much more time than you think.”

Pittsburgh-based attorney and immigration expert Ellen Freeman called Uniting for Ukraine “unprecedented,” and credited USCIS with administering it so quickly. One difficulty, though, is that parolees are not treated like refugees, so they are not permitted to begin working immediately upon arrival to the States; instead, parolees are required to “apply and secure employment authorization before they can work,” Freeman said.

The fiscal realities impact the pool of potential applicants.

“Who is interested in coming to the United States if they cannot work, if they cannot sustain themselves, unless they have really close relatives, or those sponsors really promise to feed them and clothe them and provide a roof over their heads for at least six months?” Freedman said.

Another challenge to Uniting with Ukraine is the disparate treatment parolees receive upon arriving in the country depending on the state.

“If you happen to go to Connecticut, you're going to get all kinds of benefits — health insurance for children, food stamps, affordable housing, even some cash assistance,” Freeman said.

But not all states have the same benefits.

Pittsburgh holds itself out as a place where individuals and corporations are committed to welcoming immigrants, but Freeman wishes elected officials did more to actualize this sentiment.

If politicians want to encourage diversity or people-to-people programming, there needs to be more of an effort to provide affordable housing and access to transportation, interpreters and health care, she said. “It has to come from the top down. Community activists are going to bring their own families in and that will be it.”

Freeman said her understanding of the situation stems from both her professional work and personal life. She came to the States in 1993 from Odessa and still has friends and family in Ukraine.

Despite regularly using FaceTime, WhatsApp and Teams to communicate, “it just becomes really difficult,” she said. “Calling every morning and saying, ‘How are things? How was the night?’ it’s almost obnoxious because it’s not getting any better.”

Natalya Shisman agreed. The JFCS staffer who came to Pittsburgh from Ukraine at the age of 5 said she’s been in regular contact with Ukrainian friends and family.

“The situation isn't getting better. If anything, it’s getting worse,” Shisman said.

Some Ukrainians are choosing to remain in place because they don’t want to leave the homes where they have spent most of their lives. Other Ukrainians are moving to shelters, “but in the shelters, there might not be standing room,” Shisman said. “These aren’t nice places where there are comfortable beds. There’s barely a space for you to be able to lay down.”

Shisman’s mother, Marsha, who immigrated to the States in 1989, said she, too, is receiving regular updates from friends and family still in Ukraine.

“It's very difficult there right now,” Marsha said of life in Kharkiv. “People just sleep in the buildings with no windows, no water, no gas or electricity. They go to people who can give them some food. It's just horrible there, and the winter is coming.”

Marsha uses Viber and other messaging apps to communicate with a close friend in Kharkiv who “has a daughter with Down syndrome and a husband who lost his hearing. They don't have international passports, and she just simply said, ‘If we die, we die together.’” 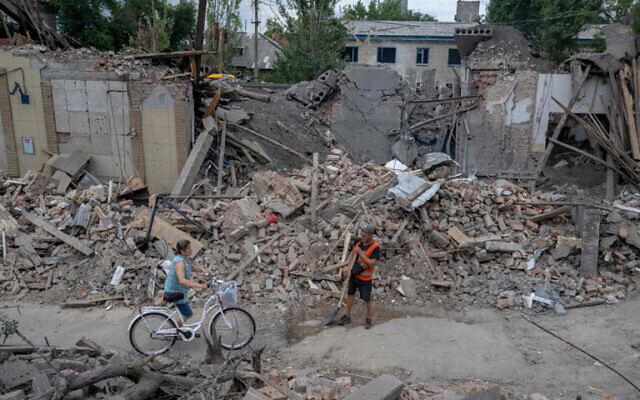 The situation has worsened for Ukrainians during the past six months, Marsha said. In the beginning, the people there “still had some food, sugar, bread. They had jobs. They had some money, some savings. And now they have exhausted their resources.”

“For every gun available, there are six people who want to use that gun to defend their freedom,” she said.

“I’m doing everything I can,” she said.

In some small way, Marsha said, she is paying back the kindness Pittsburghers showed her more than 30 years earlier. In 1989, she came to the States with Natalya and another young daughter.

“Miles and Pat Braverman picked us up from the airport at arrival and took us to our first apartment,” Marsha recalled. “Karen Feinstein adopted me as a Ukrainian sister. David Burstin brought my child the first teddy bear because we came with no toys. Marcia Levaur was my lifetime English teacher and became my best friend.”

Marsha said that mentioning their names is critical because “those people made lives for my family here in America.”

Back in Squirrel Hill, Katya is seated on an outdoor couch beside Topal. The Ukrainian parolee is going over the requisite steps that she, Andrew and Diana will need to complete before arriving in their new apartment.

Packing is a familiar process, the young mother explained.

After fleeing Kharkiv, spending a week driving west and staying in about 15 different hotels and residential spaces near the Poland-Ukraine border, Katya, Andrew and Diana finally made their way to Pittsburgh.

“I'm really happy that we're here, and we're in a safe place, and with all these amazing people, but it’s really hard,” Katya said. “I cannot post any photos to Instagram because I know how hard it will be for my Ukrainian friends to see, so I just post information about the war.”

She said she hopes people in Pittsburgh realize that Russia is a “terrorist” and that the war’s outcome matters to western civilization.

“The war is going to end, and if Ukraine doesn’t win then the war will be in Poland, in Germany, in other European countries,” Katya said. “I hope that Ukraine will win this fight.” PJC