Growing up in Churchill, Douglas Schafer didn’t imagine that 50 years later he’d be in Karuizawa, Japan, or that his son Avi would be an Olympian, but life has a funny way of taking people to unexpected places — or in Avi’s case, bestowing unexpected height.

A few days ago, Avi Schafer, a 6-foot, 10-inch professional basketball player and member of Japan’s national team, arrived at the Olympic Village in the Harumi waterfront district of Tokyo.

“We always joke, ‘How did Avi get so tall?’,” said Douglas Schafer, speaking from his home in Japan. “And I say, ‘Well, he’s Japanese and he’s Jewish, which means you got two negatives on height, which actually equal a positive.”

What will help Avi these next few weeks are the same things that brought him to the Olympics — practice, luck and his family’s unwavering support, according to his father.

The elder Schafer, 54, had a familiar Jewish Pittsburgh upbringing. He was bar mitzvahed at Rodef Shalom Congregation and had a group of Jewish friends. He attended school in Churchill before transferring to Sewickley Academy in 10th grade. After graduating from American University with a degree in economic theory, he participated in the JET Program USA, an employment opportunity that places young international professionals throughout Japan.

While in Japan, he met Sayuki Asai, a young Japanese woman who had studied in the United States, and they struck up a friendship.

It was nice to hear a “friendly English voice from time to time,” Schafer recalled.

After two months abroad, Schafer returned to the United States. He spent about a year in Washington D.C., where Sayuki was as well, and their relationship blossomed. In 1992, he returned to the Land of the Rising Sun, and the next year he and Sayuki were married.

After working for his father-in-law’s vending machine business, Schafer started his own company, Toyo Beverage, K.K., which continues to import food and beverage products from the United States and Australia to more than 1,000 stores throughout Japan.

He and Sayuki have three sons: Yuki Aaron, Avi Koki and Toki Tobias. The boys are now 26, 23 and 21, respectively. Avi is the only one who plays basketball, and his brothers are not as tall, their father said. Yuki, at 6-feet 2-inches, played soccer at Chapman University, where he studied business administration. Yuki serves as Avi’s agent, and Toki studies art at Pratt Institute in New York. 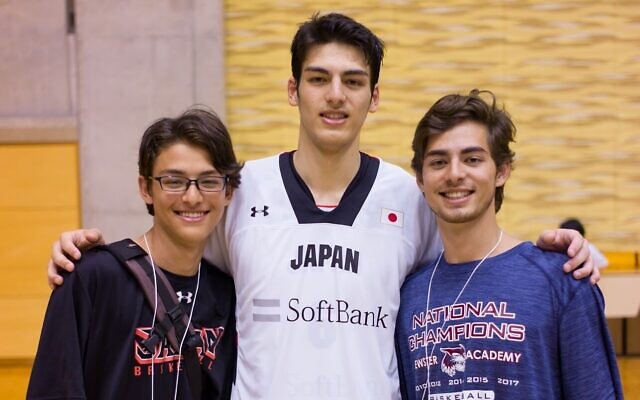 When they were younger, the family lived in Kobe, Japan. During those years, Schafer was a board member of Ohel Shelomo Synagogue, a Kobe-based Sephardic Orthodox congregation. The rabbi was a Chabad emissary, and congregants were Israeli, Syrian, Armenian and American.

“It kind of catered to everybody, and it was really nice and really welcoming,” said Schafer. “It was a beautiful thing because you didn’t have enough of any one group, so you had to all get along and work together as a synagogue.”

According to the World Jewish Congress, there are between 1,000 and 1,400 Jews in Japan.

When the family moved to Tokyo nine years ago, they lived near the JCC and there was a greater number of Jews in the area. At that point the Schafers began to experience Judaism more socially than through synagogue attendance, Schafer said.

When Avi told his parents about his dreams of becoming a professional basketball player, they were a bit surprised — he hadn’t even played until he was 16.

“The whole thing happened so quickly, and he was so determined,” said Sayuki Schafer, 55.

She admitted that it sounded “ridiculous” or even “impossible,” however, “as parents we wanted to support him and whatever he wanted to do.”

His mother said she and Douglas told Avi that if basketball was his dream, “You just do your best, and if you fail, you fail — but you just have to do your maximum effort.”

Avi took the message to heart, and his skills improved through his later teenage years. For his senior year of high school, he attended Brewster Academy, a boarding school in Wolfeboro, New Hampshire — NBA star Donovan Mitchell also went to Brewster — and in college he played at Georgia Tech before beginning his professional career with the Alvark Tokyo team in Japan.

“For most athletes, family is hugely important,” said Douglas Schafer, who credits Avi’s brothers and American relatives with creating a tightknit, supportive bond.

For many summers, before and after attending camp with cousins in Maine, Avi and his brothers spent time in Pittsburgh with Douglas’ parents, Loreen and Seymour Schafer.

Those experiences with family and friends in Pittsburgh and worldwide helped Avi and the Schafers reach this Olympic moment, even if it was unexpected because Avi was relatively new to the game, Douglas Schafer said. 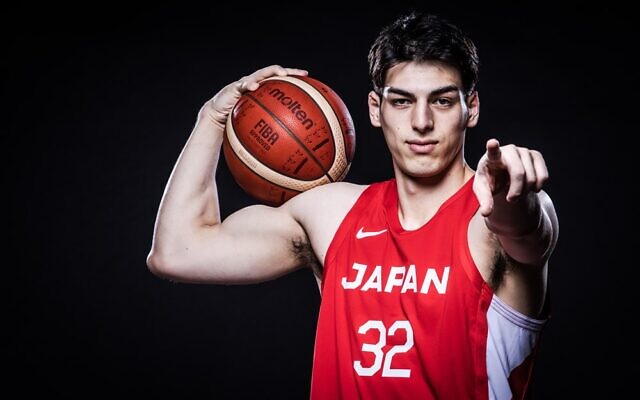 “He is a tough defensive player,” his father said.

Team Japan played Team France for its final tune-up before the Olympics. Playing 15 minutes, Avi guarded the 7-foot-1-inch Rudy Gobert of the NBA’s Utah Jazz, a two-time all-star and three-time NBA Defensive Player of the Year.

Shortly before press, Team Japan played Team Spain. In his Olympics debut, Avi came off the bench to score 5 points and register 2 rebounds and 2 blocks in 16 minutes of play against a Spain team that includes NBA stars Pau Gasol, Marc Gasol and Ricky Rubio.

Julio Lamas, Team Japan’s head coach, noted Avi’s development during the past two years, “and most recently, his physical condition has reached the level of the world standard…. His understanding of tactics is high and he is still growing.” 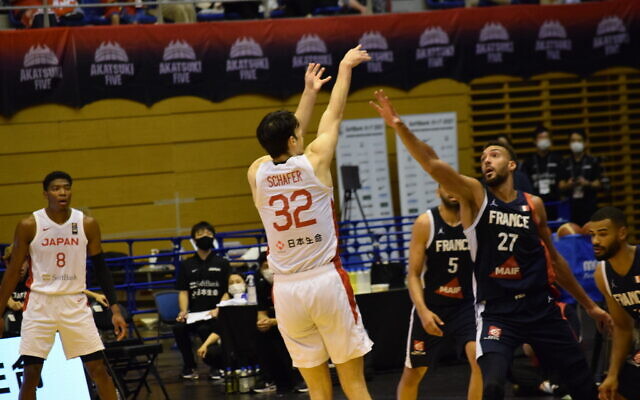 Avi Schafer shoots over NBA star and Team France member Rudy Gobert in a leadup to the Olympics. Photo courtesy of Douglas Schafer

Even though in-person spectators are not permitted at this year’s Olympics, the television audience will be the largest Avi has ever played in front of. He played for Japan in 2016 FIBA Asia U18 Championship and the FIBA U19 World Cup, and for the Japan National team in the 2018 Asian Games, but the attention on the Olympics are on another level.

Because it’s basketball, and given the NBA talent suiting up for Team USA, Spain or France, there’s a lot of media attention, said Douglas Schafer.

Even for the most celebrated Olympians, competing in the Olympics may be a once-in-a-lifetime opportunity. With that in mind, Douglas Schafer said he gave Avi specific instructions before his son headed off to Olympic Village.

“I told Avi, ‘This is a special thing, just take a deep breath and look around the stadium, look around the arena, at the other players’,” said Douglas Schafer. “‘Take it in and understand that this is so special, and you’re there, you belong there, and whatever happens, happens.’”

“I’m really happy to be selected as an Olympic member,” said Avi in a prepared statement, courtesy of Team Japan. “When I came back to Japan from the United States and decided to become a professional in Japan, I made the decision with an eye on the Olympics. I’ve been aiming for the Olympics for the [last] few years, so I’m really happy to be selected as a member. It is held in my home country and I want to show Japanese people what I can do.” PJC