Starting a new position as a pulpit rabbi during a pandemic can be pretty strange.

In addition to doing the job almost entirely through a computer screen, Rabbi Alicia Harris’ first few meetings with her congregants were not joyous occasions.

“We had some funerals, which were obviously graveside and distanced,” said Harris, 30, a former Pittsburgh resident who’s now the spiritual leader of Congregation Shir Tikvah in Troy, Michigan. “They are a way to meet people, which is kind of a bummer but true.”

Unusual situations have been part and parcel of everyday life for Harris during the pandemic. Just before Purim, in early March 2020, rabbinic classes at Hebrew Union College – Jewish Institute of Religion in Cincinnati went virtual. Around that time, Harris and her fellow classmates were scheduling interviews with prospective employers.

The first round of interviews were always supposed to be on Zoom, but the second round ended up being on Zoom as well.

“Usually, you go out and visit the congregation and sort of get a sense of it, and they get a sense of you, and that certainly didn’t happen,” Harris said.

She considered working for Hillel International, among other employers, but HUC’s placement office spoke highly of Shir Tikvah, and after meeting with the congregation’s lay leaders online, Harris agreed it would be a good fit. She started the job in July, and moved to Oakland County, Michigan, in August. Since becoming a Michigander, Harris has been busy meeting with lay leaders, congregants, colleagues in northern Detroit and members of the state’s board of rabbis. She loves her new community, she said, but in the five months since relocating to Oakland County, she can probably count the number of times she’s actually seen a congregant or colleague in person. 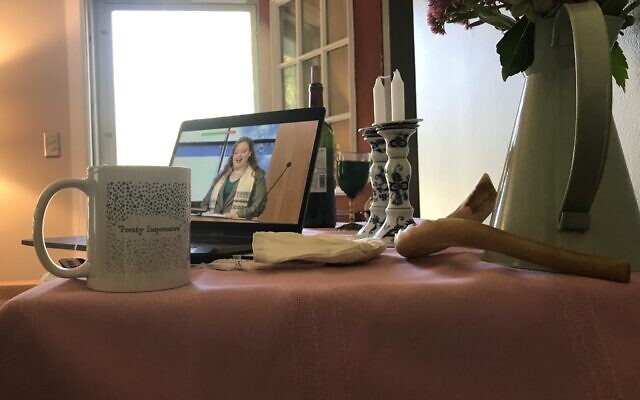 When the weather was warmer, Shir Tikvah held a few havdalah services in its parking lot, as well as a Sunday school kickoff and holiday gatherings for Sukkot and Simchat Torah.

Harris enjoyed those occasions because they allowed her to finally meet people she had spoken to online, and also gave others “a chance to see me in person, and to see that I have legs,” she joked.

“We know the death rates and we're seeing what's happening,” she said. “The reality is we've got folks who, if we were to reopen the building, their lives could be in danger. I mean, that's just the reality here.”

“It's sad to be alone,” she said. “It's hard to build community over Zoom. The High Holidays felt very hard, but it is the right decision. To me, this is all a question of pikuach nefesh (saving a life) — how do we show each other that we value each other's lives so highly? Putting each other at risk is not the way that we do that.”

As difficult as it is to shutter a house of worship, weighing in on that decision so soon after starting a job is also hard.

“There's a lot to learn the first year of being a rabbi,” Harris said. “It’s just a ton of work. Any rabbi will tell you you're just adjusting to living life, and this is a very weird adjustment period.”

Harris credits Shir Tikvah’s lay leaders and congregants with providing a soft landing, as well as prior mentorship she received from Rabbi Jamie Gibson at Temple Sinai.

Serving as Gibson’s executive assistant for two years after graduating from college was a framework for understanding “how I was going to go about being a professional Jew,” said Harris.

Temple Sinai was “where I developed my Jewish identity outside of my family,” she continued. “It’s where I was an adult for the first time, so it’s an important place for me.” 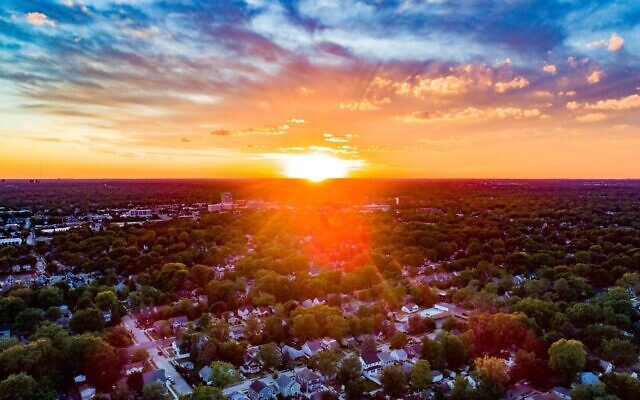 An aerial view of sunset over the suburbs of Southeast Michigan. Photo via iStock.com/Brian Sevald

Establishing a new home with little ability to explore the surrounding area is especially challenging, but Harris finds ways to unwind and recharge herself.

When the weather was warmer, she walked and biked outdoors. These days, she reads, knits, meditates and calls friends and family.

The activity she’d really like resume, though, is the one that’s probably least likely.

“I am a salsa dancer,” she said. “Detroit has a great salsa scene, but obviously there's no dancing happening right now.”

“When I was 4, my dad introduced me to the Buena Vista Social Club, and I’ve always sort of been obsessed with it,” said Harris.

During visits with her Peruvian aunt, who lived in St. Louis and always kept a constant stream of music playing, the two would regularly dance together to the rhythmic beats.

After arriving in Cincinnati for rabbinical school, Harris, a fluent Spanish speaker, got involved in the Latin dance scene.

“It gave me such a big outlet,” she said. “It's an amazing way to meet people and it grew my life in Cincinnati exponentially.”

Harris looks forward to a post-pandemic day when people can safely engage in person again, whether it’s schmoozing after services or moving on a dance floor.

“The thing I probably miss the most is my friends in my Latin dance scene,” she said, “but I know it will come back. I know it will.” PJC