While waiting inside a gate at London’s Heathrow Airport on her way back to Israel, Eliza Mayo mulled over her experience at COP26 and how the global climate change conference could benefit her work at home.

Mayo spent most of her time at the conference meeting with representatives of other NGOs and attending panel discussions, including one on strategies for keeping young people optimistic — a landmark survey of 10,000 16- to 25-year-olds published in Nature found that negative feelings about climate change can spur psychological distress. She also spent time speaking with representatives of the Israeli government, including Tamar Zandberg, minister of environmental protection.

Although politicians from around the world are attending COP26, Mayo said that, for her, talking to those from the Jewish state was particularly important.

Many Israelis are of the belief that Israel is an “island country, and that’s not the case,” she said. “Nature doesn’t have boundaries.”

The Arava Institute is predicated on that principle. With students hailing from Jordan, Israel and other countries worldwide, the institute focuses on regional and global environmental challenges. 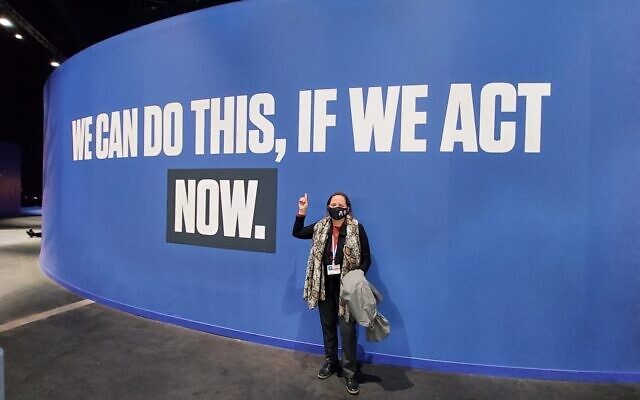 Eliza Mayo stands beside a sign at COP26. Photo courtesy of Eliza Mayo

Mayo said she hoped her efforts at COP26 made clear that Israel “can’t survive with tech alone.”

Climate justice in the Middle East branches into issues of tech, security and morality, Mayo told the Chronicle, adding that climate change “is already a major stress for underserved populations, causes political unrest and leads to refugee overflow.”

When countries think about their responsibilities, Mayo said, they shouldn’t do so myopically. “Either you’re working on those issues with your neighbors or you’re not really solving things.”

Squirrel Hill resident and climate activist Howard Rieger said he followed COP26 while he was visiting civil rights sites in the American South.

The announcements coming out of Glasgow are “crucial,” Rieger told the Chronicle.

Among numerous pronouncements made at the conference was one by Narendra Modi, India’s prime minister, who pledged that his country would reach net zero emissions by 2070. (India is home to nearly 18% of the world’s population and is the third largest emitter of greenhouse gases behind China and the U.S.)

For Rieger, the matters addressed at COP26 are consequential not just on an international or national level, but on a hyperlocal plane as well.

People can “get behind the efforts that exist in our own community,” through encouraging elected officials to adopt environmentally friendly policies, supporting new candidates who are committed to bettering the climate or making personal changes in behavior, he said. And Pittsburghers have some critical choices to make in light of local realities.

For example, Allegheny County has some of the worst air pollution in the country, according to the American Lung Association. In a 2021 report, the association gave Greater Pittsburgh a grade of F in the ozone and 24-hour particle pollution categories. Breathing ozone, otherwise known as smog, can lead to immediate health problems, including shortness of breath, wheezing, coughing, asthma attacks, increased risk of respiratory infections and even premature death. Likewise, breathing particle pollution can cause illness, hospitalization and premature death.

For eight years, Rieger has worked with elected officials, community leaders and local activists to improve Pittsburgh’s air quality. He convened a group, East End Neighbors, which holds digital town halls and still meets largely online due to the pandemic.

There’s a common belief that Pittsburgh has transformed itself from the Steel City to a center of education, medicine and technology, Reiger said, but the city “won’t have reinvented itself appropriately if we can’t be part of a solution to the climate crisis that we all face — and we face it at the very tangible level of it’s killing us; it’s literally killing us.” 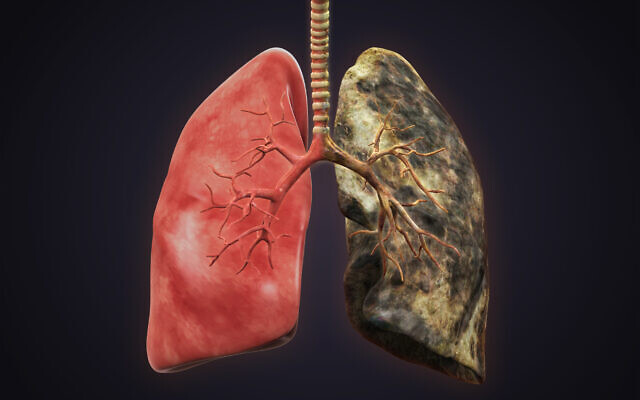 Image by Nerthuz via iStock

Squirrel Hill resident Eddie Shaw said he sees the issue of climate change as something that comes down to a matter of Torah.

“We were given the earth’s resources in a way to till and to tend,” Shaw told the Chronicle while grilling tofu and vegetables outside his Pittsburgh home. “We are stewards and renters. We’re not owners.”

Fifteen years ago, Shaw began composting food scraps. From there, he started changing other behaviors. He often rides his bike for transportation; otherwise, he drives an electric vehicle. He relies on Pennsylvania wind power for his home’s energy needs. And on Sundays, Shaw sells hand-stitched leather bags and wallets at the Squirrel Hill Farmers Market.

Shaw doesn’t purport to be “100% consistent” in his climate behavior — he said he burns wood for 60% of his home’s heat — but he does encourage others to make small and significant changes, such as eliminating single use plastic bags.

In Shaw’s eyes, single use plastics are “offensive.”

“They’re such a disgusting way to treat the earth’s resources,” he said. “You use it once and throw it away and it won’t degrade for hundreds of years.”

Shaw said he wishes people would think about life through a prism larger than instant gratification.

“The reason we are where we are, in one sense, is because of convenience,” he said. “We want everything to be there, just as we need it, when we need it and we don’t have any thought about what comes later.”

Shaw said he was following news coming out of COP26, albeit with some pessimism.

“We’ve known about this issue for years,” he said, but “it’s so difficult to achieve what we’re trying to do.”

“I think all of us inhabitants of the planet have some kind of responsibility,” he said. “If more of us would engage in an environmentally responsible way, whatever that means to each person, we wouldn’t be where we are today.”