After nearly a year and a half of being surrounded primarily by canvas and paint, Smadar Livne is excited to finally be back in the company of people.

Livne, an Israeli-born Maryland-based painter, will be among those showcasing their work on Aug. 28 and 29 at the 24th annual Shadyside…the Art Festival on Walnut Street. The free outdoor event will bring artists and art lovers together for a weekend of mingling, shopping and learning about each other.

Speaking from her Owings Mills, Maryland, home, Livne said she is looking forward to reconnecting with Pittsburghers. A veteran of the Shadyside show and other similar festivals, Livne has showcased her work nationwide for nearly three decades. She said she appreciates the “conversation and energy” between artists and patrons at art festivals, and after so many months away, it will be good to enjoy them once again.

Born in Beit Oved, a moshav located in central Israel, Livne was raised by hardworking parents who “helped build the country,” she said. Their example, as well as her academic pursuits, helped shape her identity as an artist.

After completing her army service, Livne studied architecture before earning additional degrees in fine art and literature. Those disciplines coalesce in her colorful paintings, which have a philosophical bent.

The pieces created by Livne, a self-described “storyteller,” contain rich images — her subjects include Shabbat candlesticks, Jerusalem cityscapes, classical musical instruments and Hebrew letters. Occasionally, she tucks away full sentences of Hebrew text inside the work.

Whether it’s a passage from the Torah, Kabbalah, Maimonides or Judah Halevi, the words are part of each painting’s message.

“My creation is my language,” she said. 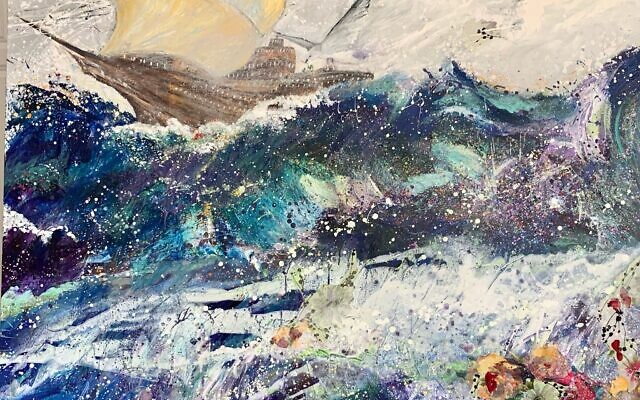 “Smadar and her work express pure emotion,” said Elizabeth Dashiell, a publicist with Howard Alan Events, a Florida-based producer of juried art and craft shows. “Everyone who sees it gets a different feeling.”

Dashiell has known Livne for years and witnessed the strong connections passersby form with the artist and her paintings.

“When people come to our shows, there’s not one person who isn’t moved by something they see,” said Dashiell, adding that Livne’s work extends beyond art.

“You are seeing someone’s internal thoughts, feeling, emotions — the full range of human experience has been poured into that work,” she said. 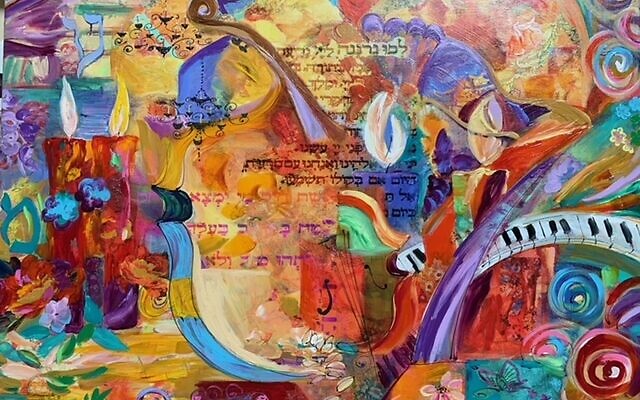 Livne said that after nearly 30 years of weekend shows, being grounded by the pandemic has been difficult.

“I love to travel,” she said. “With art shows, I travel and meet new people…COVID was shocking. A year-and-a-half ago all of my art shows were canceled.”

The pandemic required Livne, a full-time artist, to pivot. She began reaching out to clients through email and renewing connections online. The efforts proved successful: Not only was she able to sell her work, but she also gained perspective; after decades of packing up and traveling to shows in different cities each weekend, she realized she needed to slow down.

“I feel like I want to take time for myself,” she said. 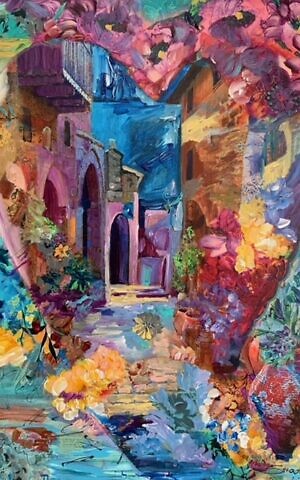 Her three daughters are spread out across the United States, and she has a grandson in Florida. The desire to spend more time with family is guiding her travels now, she said.

But despite reducing her appearances at future events, Livne is still creating new work and building lasting relationships.

“I’m slowing down running to art shows, but not slowing down my creations,” she said. “I hope people will learn to reach me, and come to me and not me go there.”

To wit, Livne extended an open invitation to her home-based studio. “You can see other pieces that I never bring because they are so large — I can’t fit them into my car…Shows are for small pieces that fit into homes,” she said.

Noting that Owings Mills is only a four-hour drive from Pittsburgh, Livne added that even if people aren’t able to join her at next weekend’s Shadyside show, they can stop by during a future trip out east.

“Come for a tour and say hello,” she said. “My place is open, and nobody should be intimidated or worried. They shouldn’t feel they have to buy anything. Just come and say hello. I will take you through a road of history and philosophy in a contemporary way.” PJC