Charlie Baron, a trained herbalist and member of a “shmita hive,” has been unearthing new connections to Judaism and Pittsburgh’s Jewish community.

“Judaism was a part of my life growing up,” Baron said. “Now, I think I’m returning to it with a lot more intentionality.”

Raised in a Reform household, Baron attended a Jewish day school from second through eighth grade and celebrated her bat mitzvah at a large temple in Atlanta, Georgia. In July 2020, after completing a three-year clinical herbalism program at Vermont Center for Integrative Herbalism, Baron moved into Pittsburgh’s Moishe House, a residence where young adults lead their peers in Jewish engagement. Thus, Baron was introduced to the city’s Jewish landscape and began collaborating with several local organizations, including Pittsburghers for Public Transit, Ratzon and Repair the World. The latter, which hailed Baron as its 2021 Volunteer of the Year, provided her with the chance to work in its Sheridan Avenue Orchard and Garden, allowing her to put to use her years of schooling and expertise in nature.

While living at Moishe House, Baron and several of her housemates started exploring different ways to mark Shabbat. While celebrating Shabbat wasn’t necessarily new for her — her family would sometimes have Shabbat dinner together — observing it on regular basis was. Marking the Sabbath with intention each week was inspiring, Baron said, and offered a “bridge” to exploring other aspects of Judaism, such as shmita, a biblical mandate for property owners in Israel to let their fields lie fallow and provide sustenance to the poor for one year out of every seven.

Baron said she’s learned about shmita largely by gathering with friends once a month within a “shmita hive.”

Exploring these topics coincides with Baron’s interest in herbalism, energy and a connection to the earth and its seasons, she said. Additionally, learning about shmita dovetails with her current Shabbat practices. 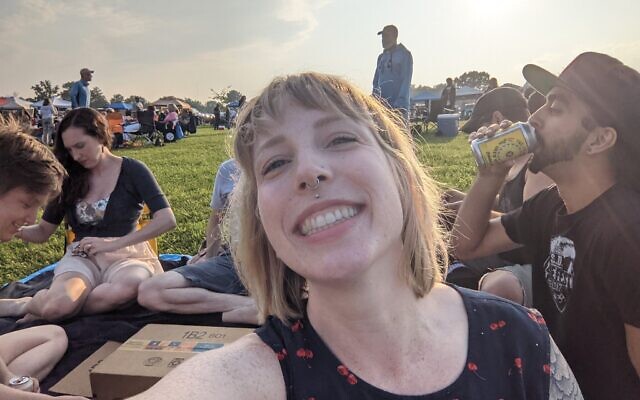 Every week, in the company of friends, Baron welcomes in Shabbat with candles, challah and grape juice or wine. Dinner then follows. She said the remainder of the Sabbath is dedicated to resting.

“I want to feel a special holy space that's separate from the daily grind of the other six days,” she said.

She’s able to find this sacred space by melding “traditional halacha” with her own interpretations, she said. For instance, although she doesn’t use most electronic devices on Shabbat, she occasionally uses technology to reconnect with a distant friend.

Before concluding Shabbat with a Havdalah service, Baron said she gathers with friends for about two hours to practice “being present with each other.” Currently, Baron and her peers are “in flux about whether we’re allowing creative work like writing or drawing,” but the general idea is to use the two-hour window to provide distance from weekday activities.

As Baron moves forward with her Jewish journey, her challenge is to balance study, practice and work, she said. Soon, she will welcome clients to her business, Slowpoke Herb Clinic, and said that starting a company requires a lot of time and energy. For that reason, if ever there was a time that the strength of community was needed, it’s now.

“I had a community that I was celebrating Shabbat with, and when I moved out of Moishe House, I'm living alone again,” Baron said. “I want to still have that on a weekly basis.” Along with getting her clinic going, her goal is to create a “shomer Shabbat space that we can invite other people into, engage in practices that we really care about and get to have some community around it.” PJC