Randy Boswell fell off a roof. After three surgeries, two weeks of hospitalizations, about 15 days in a rehab center and six weeks of home-based physical therapy, the 73-year-old Churchill resident built a 7-foot-tall menorah.

“My attitude is what keeps me going,” Boswell said. “I try not to let anything hold me down.”

Apparently, not even injuries sustained from falling 12 feet.

Boswell went up on a roof last June to help out a friend from Temple David whose husband had died months earlier. After Boswell offered to do some work around her house, she told him the siding of her home was a bit dirty. Boswell said he could powerwash it, and when she agreed, he ascended the roof.

But he noticed the intensity of the powerwashing was inadvertently removing more than just dirt — it was taking the paint off the siding as well.

“It startled me and I stepped backwards,” he said.

With nothing behind him, Boswell fell one story down onto a gravel driveway.

“It wasn’t concrete, but I don’t know if it would have made any difference,” he said. “It was still pretty hard.”

Boswell thinks the neighbors must have seen him fall and called 9-1-1 because an ambulance arrived moments later.

“I wasn’t scared — I knew that my leg was broken and my heels weren’t in very good shape — I’ve had other breaks before,” he said. “I felt worse for her than I did for me.”

Boswell said his friend expressed considerable guilt, even though he kept telling her it wasn’t her fault.

“I chose to go up there,” he said. “It was just one of those things that happened.”

Boswell’s nonchalance belies the severity of his injuries.

The fall crushed both his heels, broke his left femur and caused stress fractures in his lower back. In addition to three surgeries and a rod being placed in his femur, he wore a body brace for four months and wasn’t allowed to stand until the first week of October.

“I am slowly getting better, but still have pain whenever I walk too much,” Boswell said. “The X-rays of my heels look like someone went on a crazy erector set excursion.”

It’s an oddly humorous image, but that’s Boswell’s hope — to draw listeners away from the reality that his bones were shattered, and, instead, make people laugh. He pulled the same tactic right after he fell off the roof. With the Olympics just weeks away, Boswell told those who rushed to his aid, “I tried to stick the landing but it didn't work.”

Boswell’s wife, Marsha, isn’t surprised that’s what came out of her husband’s mouth.

“Even if he’s in pain he tries to make other people feel better,” she said. “He just is such an amazing person. In the hospital room he hardly complained. I could hear him laughing when I was walking up the hall. He’s always trying to look at the good side of things.”

Rabbi Barbara Symons agreed, and said that’s part of the reason why Boswell was able to help so many congregants during Chanukah this year.

Just after completing rehab, and right around the time he finally removed his back brace, Boswell got a call from a Temple David lay leader asking him if he could make a menorah for the congregation.

Having already erected a giant electric one for himself, Boswell agreed — because that’s what he does. It didn’t matter that Boswell was using a walker, or that in order to fashion the piece he’d first have to creep to his garage, retrieve materials and then work at another station.

“I was able to do a lot of it while sitting,” Boswell said. 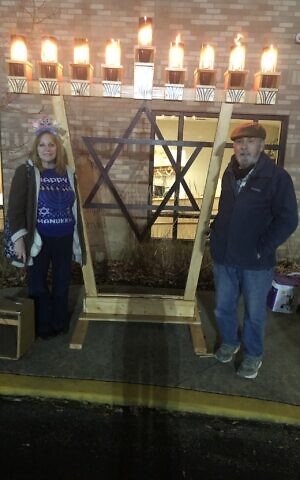 “I build these things in my head all the time,” he said.

Boswell estimates that apart from spending about $220 on materials, for which the congregation reimbursed him, he dedicated between 16 and 20 hours of labor.

“The part that took the longest was the boxes,” he said.

At the top of each of the menorah’s branches is an individual container holding a glass vessel containing approximately one-and-a-half cups of oil.

It’s a far reach to the top of each box — but Boswell took that into consideration. In order to light the wick within each box, a person standing on the ground can use one of Boswell’s handmade torches — wooden sticks with white cotton socks draped at the ends.

It’s one of several touches, like a Star of David, Boswell added in order to “gingerbread” the menorah, he said.

When the large menorah was finally used at Temple David, Boswell was pleased to see his creation.

“Everybody was commenting about it,” he said. “They were going on about how beautiful it was.”

Symons agreed and noted how the menorah reflects its maker.

“That Randy Boswell created this chanukiah this year is a testament to his own fighting spirit and ability to bring light to others,” she said.

Boswell said he’s humbled by the kind words so many people offered, and is just “proud” he could contribute to the congregation.

“I always want to be able to continue to do so, and this kind of helped me get back into it,” he said.

In the process of taking down his own personal oversized menorah on his lawn, Boswell had a fright. As he was holding the fiberglass menorah onto his dolly, the menorah somehow slid off and broke. This time, however, instead of jumping backwards upon a scare, Boswell stood still.

“You learn from your mistakes,” he said. “I’m out of that stage from trying to stop things from falling.”

And lest anyone fret about Boswell’s broken menorah, the situation is already under control.