Carolyn Novak visits Congregation Poale Zedeck’s Memorial Park almost daily. Although her loved ones aren’t buried there she finds it a place of comfort.

Almost eight years ago, Novak, her husband Bob and their dog Sherman began walking the grounds of the cemetery. Nearby Dickey Road in Gibsonia is a bit too busy with traffic for peaceful evening strolls, said Novak, 54, and the memorial park, with its quiet paths, diverse wildlife and foliage, offers a feeling of serenity.

A 200-year-old oak tree helped provide that sense of peacefulness. Measuring 18 feet in circumference and stretching almost 80 feet toward the sky, the tree was both protective and awe-inspiring.

“You could see the moonlight through it,” said Novak. “And we’ve stood under it when it rains.”

Eight months ago, just days before Rosh Hashana, a violent storm tore through the area. Debris was scattered throughout the cemetery, shrubbery was harmed, two headstones were toppled and portions of the path were inaccessible.

Novak was away the weekend of the storm but returned the following Monday. During a walk through the cemetery she ran into maintenance staff, who were at work on the old oak tree.

Massive limbs had fallen, and, because of interior rotting, the tree needed to be felled.

Between the headstones, the mangled oak and the widespread ruin, the site was “just awful,” said Novak. 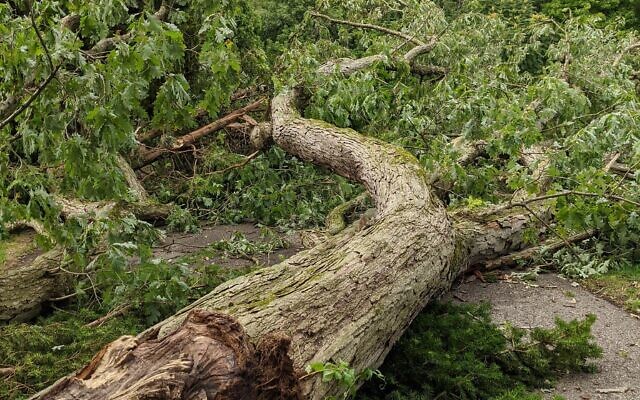 Joel Ungar, chair of Poale Zedeck’s cemetery committee, told the Chronicle at the time that six trees needed to be cleared, and that repairs would cost tens of thousands of dollars, “and that doesn’t even include the stones.”

Ungar and Novak first met years earlier when Ungar noticed her and her dog ambling along the grounds. He asked her if she walked there often, and when she told him she did so almost daily, Ungar was thrilled.

Because of the distance between his home in Squirrel Hill and Gibsonia, he could not check on the cemetery as often as he would like. He asked Novak to call him if anything was ever amiss and she agreed.

“That’s how I met Joel, and so now I try to kind of keep an eye on things,” Novak said. “If a headstone is knocked over or a tree is damaged or something like that, I take pictures and send them to Joel. That’s how we’ve kept in touch.”

Novak knew Ungar had already seen the cemetery after the September 2020 storm, but reached out to him days later. She had been thinking about the old oak tree, about loss, and about how to restore some beauty to the grounds — while honoring someone she loved.

A year prior, Novak’s father, John Kenawell, had unexpectedly died. Kenawell and his wife of 54 years, Linda, were at their cottage on Maple Island, near the Allegheny River, when the tragedy occurred.

“It was awful,” Novak said. “He couldn’t swim. We don’t know what happened exactly, but he ended up drowning.”

Kenawell was buried at Jefferson Barracks National Cemetery in Missouri. In lieu of delivering a flower arrangement, a relative gave Novak some money and told her that when the time was right to plant a tree, because unlike flowers which wither in days, once a tree is planted “you’ll always have it.”

Novak held onto the money for months. She didn’t know whether to plant a tree on Maple Island or on her property in Gibsonia, or even what species to consider. 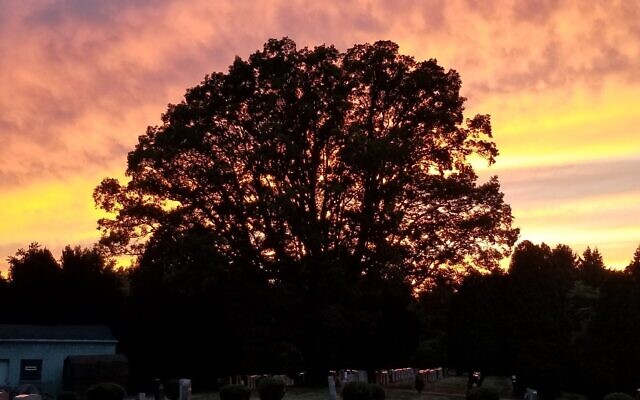 Prior to a September 2020 storm, this oak offered a place of respite for nearly 200 years. Photo by Carolyn Novak

After the September storm, when Novak reached out to Ungar, she told him her story — about her father, about how much comfort that old oak had provided, and asked whether he would be amenable to her planting a new tree there.

Ungar happily agreed. After finding a mutually agreeable spot in the cemetery, they decided to plant a magnolia tree.

“They don’t get real big, and they don’t have a real deep root system at all, which is good for a cemetery,” said Novak.

There was also a personal connection.

“My dad, when we lived in Hollidaysburg, had a big magnolia in front of his office,” said Novak, and, at one of his workspaces “the driveway was lined with magnolias. I thought, ‘Oh well, if we’re going to plant a flowering tree then that would be a great one.’”

Novak called a friend, Dave Hill, who runs Hill’s Tree Care & Nursery in Sarver. Hill picked out a magnolia and two weeks ago traveled to Poale Zedeck’s cemetery with the small tree in tow. He met Novak, her husband and dog at the agreed upon space and began digging. Hill planted the tree and began filling the hole with mulch. He showed Novak how rainwater would enter the space and enable the magnolia to thrive for years to come. 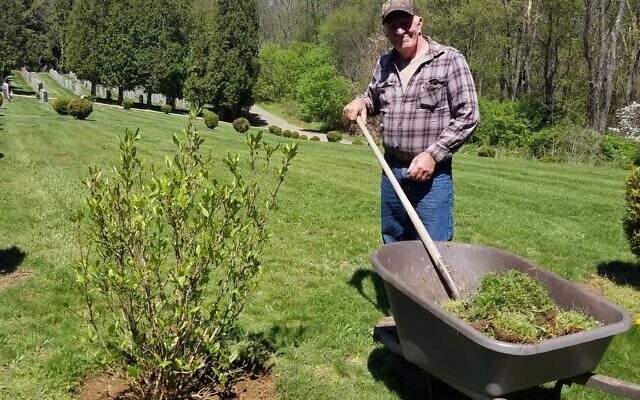 As Hill finished his work, Novak placed a laminated card with a poem and information about her father at the tree’s base and quietly recited a prayer.

On a subsequent walk through the cemetery she passed the tree and noticed several small American flags circling its trunk — Ungar had placed them there in honor of her father’s military service.

The magnolia tree, said Ungar, is a beautiful addition and further dignifies the memorial park.

“We lost a tree that was noticeable and aged and respected. It had been there for hundreds of years,” he said. “Now we have new growth there, at a place of respect.” PJC