The only “something new” Dr. Marissa Elana Baron Mahan wore for her May 30 wedding was a pair of shoes. On her wrist was a gold cuff belonging to her grandmother Sauny Baron. On her ears were pearls with diamonds that her mother, Deborah Baron, sported as a bride 31 years ago. And the long white gown she wore as she walked down the aisle at Stonewall Resort in Roanoke, West Virginia, was a nod to the past, too — both her mother and her aunt, Lisa Young, wore that dress decades earlier on their own wedding days.

In addition to these precious hand-me-downs, Mahan was similarly surrounded by familiar and cherished and articles, including an aged cloth canopy. Yellowed and tattered, and carefully erected above the wooden dance floor in Roanoke, the chuppah not only represented the home Mahan and her husband, Sidney, were set to create, but served as a bridge between generations and communities.

Mahan, 28, who goes by “Mari,” was named for her maternal great-grandfather, Morris Stein. Born Feb. 12, 1910, in Russia, Stein eventually came to Pittsburgh and became a beloved member and officer of the Homestead Hebrew Congregation.

“My father had been such a part of that synagogue when he was alive,” said Stein’s daughter Iris Nahemow, 83.

Said his granddaughter, Deborah Baron, 58, “He used to drive around and pick up people to help make a minyan.” 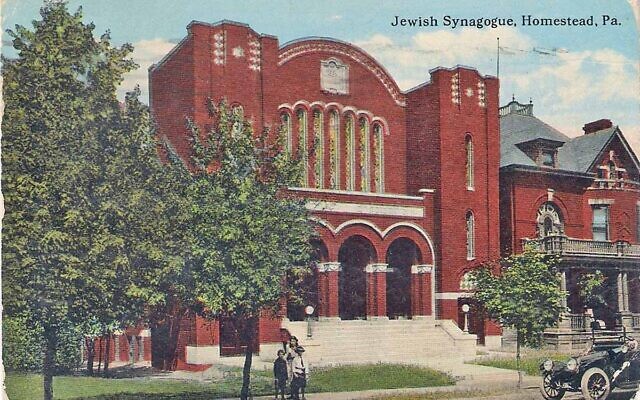 As a child, Baron often attended the “Homestead shul” with Stein. She recalled the building’s layout, its balcony from where women would pray, the pews where she and her grandfather sat, and the congregation’s final years before its 1993 closure.

Leading up to her 1988 wedding, Baron wished for the ceremony to take place at her grandfather’s synagogue.

“I had these amazing memories of going to the Homestead shul and felt really connected there,” she said.

Nahemow, Baron’s mother, was less enthused by the idea. The reception was supposed to occur at Tree of Life Congregation in Squirrel Hill, and the prospect of having people traveling between sites during a wedding was daunting. Additionally, the Homestead shul was barely functioning at that point.

“They were really only having minyan once a week,” recalled Nahemow.

Stein died in 1981 and by 1988 it had been decades since the Homestead shul had hosted a wedding, according to Homestead historian Tammy Hepps. Nonetheless, out of respect for Stein and their love for his family, the aged congregants cobbled together a final hurrah.

The synagogue was cleaned and its outdoor front steps were painted. Finally, Baron received a message that they would be able to put the finishing touches on her wedding.

“I remember someone saying they found the chuppah,” she said.

Stitched with biblical Hebrew words from Jeremiah translated as “the sound of mirth and gladness, the voice of bridegroom and bride,” the canopy served as a symbolic home for Baron and her husband, David, as they were married in a space she had so often frequented with her grandfather. 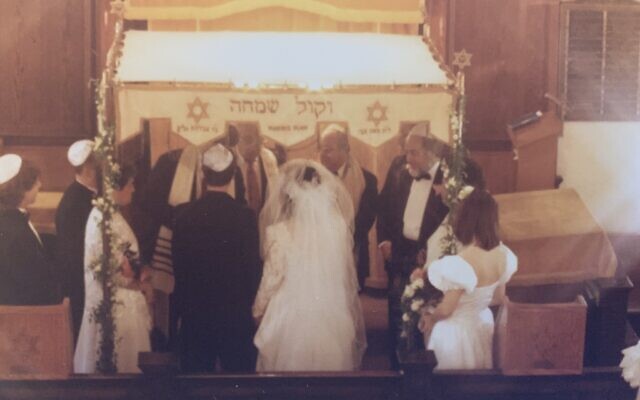 Deborah and David Baran stand beneath the chuppah during their wedding ceremony at the Homestead shul. Photo courtesy of Deborah Baron

Five years later, in 1993, Baron’s sister Lisa was preparing for her own wedding. The Homestead shul had recently closed but the family used the chuppah again. Prior to setting it up inside Tree of Life, Baron and Lisa’s father, Martin Nahemow, polished the chuppah’s poles and ensured the connected wiring and lights functioned properly.

“My husband was a physicist,” said Iris Nahemow. “He felt like working on the chuppah was a tribute to my dad.”

After the ceremony, the chuppah was packed up and it would be another 28 years before it would be used again.

Months prior to Mahan’s wedding, as preparations intensified, Baron began helping her daughter locate a chuppah. During a conversation with Ken Turkewitz, who was serving as Congregation Beth Shalom’s interim executive director, Baron asked about the old canopy, as many of the Homestead shul’s belongings had ended up at Beth Shalom. Turkewitz called her back and said that Beth Shalom’s events coordinator, Michelle Vines, had found the worn and discolored relic stashed away in a closet.

Baron retrieved the chuppah and began a familiar process. As she pieced together the antique yellowed cloth and raised the poles, her husband, David, repaired the bent and broken light sockets. Finally, before their daughter’s wedding, they dismantled it, placed it in the car and drove it to West Virginia. 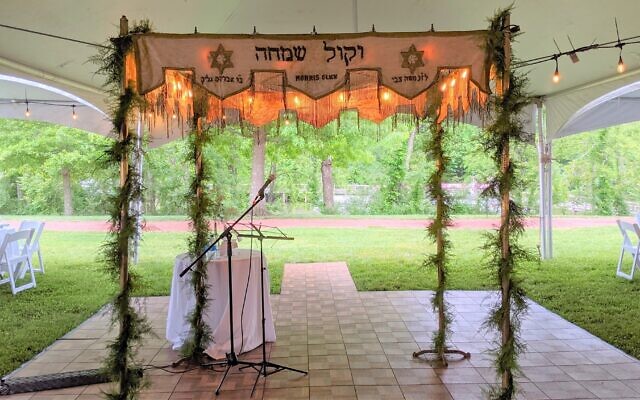 The chuppah, which was dedicated in memory of Morris Glick, was rebuilt on-site in West Virginia. Photo courtesy of Deborah Baron

Hours before the May 30 ceremony, Baron’s sister Lisa oversaw the chuppah’s construction.

“The theme for the wedding was ‘nothing new’ and the chuppah really came from that,” said Mahan. “I’m the sixth generation of my family to live in Pittsburgh. That connection to Pittsburgh and Homestead added a lot of magic to our already magical wedding.”

Both Mahan’s grandmother and mother agreed.

Seeing that old canopy and the young couple standing beneath it, “I felt my father’s presence, and my grandparents’ presence and my husband’s presence,” said Nahemow.

“It just felt good. It felt right. It felt bashert,” echoed Baron. “It felt like a blessing from my grandfather. Like a blessing to the marriage.” PJC