Few things last forever, and piping certainly isn’t one of them.

Ever since scopes were placed beneath Rodef Shalom Congregation’s historic Shadyside building in 2010, the congregation has known that its more than 300 feet of terra cotta piping was problematic. For several years now, the 114-year-old corroding tube has ruptured and generated floods throughout the property. Members and staff of the Reform congregation realized that a costly and necessary fix was required; to save the building’s foundation, it had to reckon with a relic of its past.

Located at 4905 Fifth Ave., Rodef Shalom has long been treasured by architectural experts and amateurs alike. Upon the building’s dedication in September 1907, The Pittsburgh Daily Post fawned over Rodef Shalom’s construction, form and details, writing, “One does not have to be a connoisseur or to understand the techniques of the adept masters in architecture and design, who conceived the whole magnificent affair, to appreciate it. The most subtle-minded on this subject are forced to stop and admire it for a moment at least.” 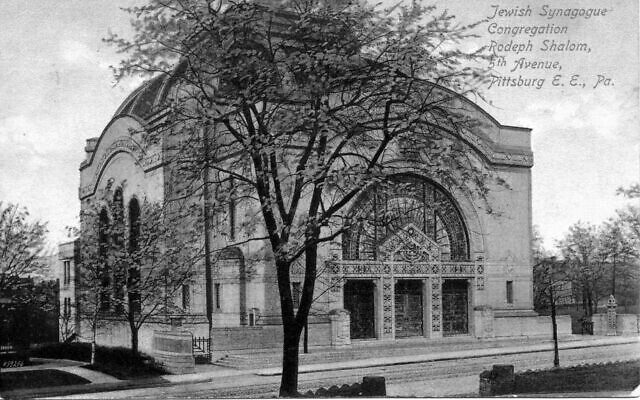 Designed by Henry Hornbostel, a Brooklyn-born Columbia University graduate who studied at the École des Beaux-Arts in Paris before indelibly shaping Pittsburgh’s landscape, Rodef Shalom mirrored popular designs of the early 20th century. With its incorporation of yellow bricks, terra cotta flourishes, a double dome and scaling stained glass, Rodef Shalom, like other Beaux Arts American buildings, paid homage to the Italian Renaissance, but it was also a 20th-century marvel in design.

The congregation’s intention was to build a “beautiful, architecturally significant and usable structure according to the highest standards of that time,” said Martha Berg, Rodef Shalom’s archivist.

That standard included a strategically placed wastewater and sewage collecting system. Still in use today, and aesthetically situated out of sight, Rodef Shalom’s system employs interior downspouts that funnel rainwater from its roof down into the building and then underground into a sewer before transporting materials to the city’s system, explained Bob Rosenthal, Rodef Shalom’s building committee chair.

Pittsburgh winters, and even late springs or early falls, are prone to freezes. For buildings with external downspouts, when water passes through at near-exterior temperatures, there can be a greater likelihood of ice dams and blockage.

“When you have it run through the building, it's just a little bit warmer and less likely to freeze up,” said Falcone. 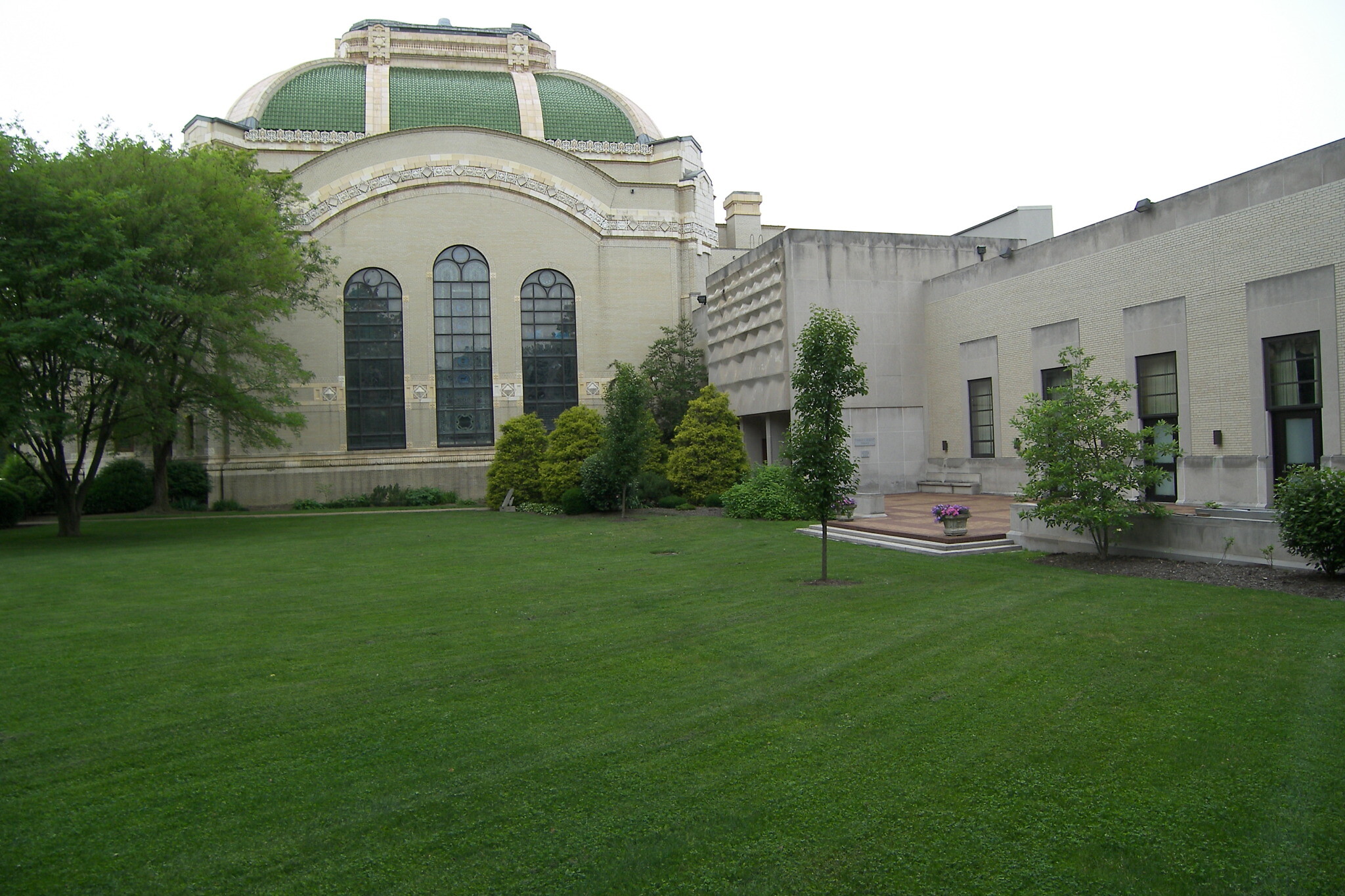 Since 2010, the congregation has repaired aspects of the system, but corrosion and increased rainfall continue to stress the piping and demonstrate a need for change, said Marlee Lyons, Rodef Shalom’s facilities and sustainability manager.

In 2019, Pittsburgh recorded its highest precipitation total since 1836.

The figure isn’t a one-off. According to Pennsylvania’s Department of Environmental Protections, between 1958 and 2010, the Northeast United States experienced more than a 70% increase in the amount of precipitation from intense storming — and the wetness is slated to continue: By 2050, area precipitation is expected to increase 8%.

When Rodef Shalom’s system was installed more than a century ago, the average rainfall was less than it is today. Between the increased precipitation and severity of storms, the system can’t keep up, said Falcone.

Several weeks ago, Pennsylvania Historical Museum & Commission, through its Keystone Historic Preservation Construction Grants, awarded Rodef Shalom funds to replace 300 feet of piping with a new system that separates rainwater and sewage into two tubes for separate treatment, thus preventing overflow. Meeting various criteria, including its 1980 inclusion in the National Register of Historic Places and nonprofit status, Rodef Shalom was eligible for the grant.

Falcone, who serves on Rodef Shalom’s board of trustees and is president of Preservation Pittsburgh, a community-based advocacy organization, said the 50/50 cash matching grant is significant.

Perhaps for those with a background in engineering or waterflow, Rodef Shalom’s $190,000 dollar sewer system rehab is exciting, but it’s not the type of building improvement that motivates some donors, said Falcone.

“When you start talking about elements of a building that not only can't be seen, but you wouldn't necessarily want to have your name directly attributed to, it doesn’t really have that kind of lasting legacy appeal that I think some people look for,” he said. 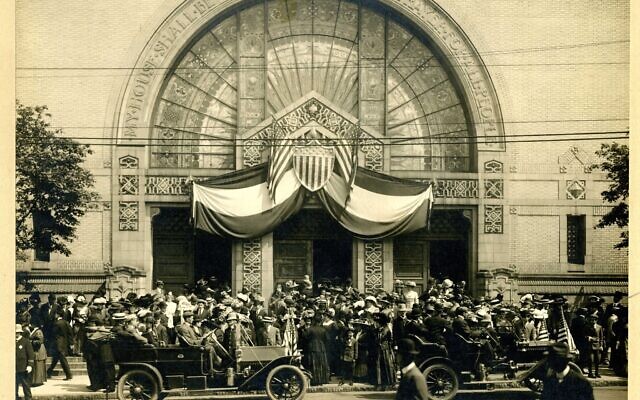 Throughout its history, Rodef Shalom has been a local caretaker — prior to the pandemic, congregations including Rodef Shalom, Dor Hadash, Bet Tikvah and Tree of Life*Or L’Simcha, regularly used the building — and this grant, which appreciates the severity of a threatened foundation, will enable Rodef Shalom to remain viable, as it has been for more than 100
years, said Lyons.

Although the historic preservation of old buildings is an important value, so too is a commitment to appropriate maintenance and improvement, explained Falcone: “Dumping all of the water that comes off of our building into the sewer system is not good. It's not good for us. It's not good for the planet, and being able to look at it and take a bit more due diligence is absolutely the right thing to do.”

Whether it’s greening Rodef Shalom’s sewer system, or incorporating native plantings that encourage urban wildlife, the congregation is following the recommendations of Rabbi Sharyn Henry, who during her 2019 High Holidays sermon encouraged listeners to become stewards of the property, said Falcone.

It’s a lofty undertaking, but in doing so Rodef Shalom remains committed to the principles espoused by its forebears who dedicated the building more than a century ago, said Berg.

“Decades from now will witness the real results of the step that has been taken today,” wrote Rev. J. Leonard Levy, Rabbi of Congregation Rodef Shalom, in the Sept. 12, 1907, edition of The Jewish Criterion, a precursor to the Pittsburgh Jewish Chronicle. “It now rests with the Jews of this community to continue the work that has begun so gloriously.” PJC