Pittsburgh sculptor Jonathan Shapiro’s work beckons viewers to come closer, to follow its mid-air bends and thrusts, and marvel at its form. The mobility of Shapiro’s pieces is a nod to the sculptor’s history — yes, he was a gymnast, but more importantly, he told the Chronicle, he’s Jewish and acutely aware of a cresting antisemitic wave he thinks is readying for impact as it did when it reached his European grandparents decades ago.

Shapiro, 48, said his paternal grandparents arrived in the United States after enduring persecution, pogroms and hardship just outside Kyiv.

On the day he spoke with the Chronicle, he flipped through histories of the Holocaust while commenting on the growing conflict between Russia and Ukraine.

“I try reading about what was happening around them, about their cultural life, Ashkenazi urbanism of the time, trying to figure out what that was like,” Shapiro said. “That’s where we came from, why I am distrustful of others.” 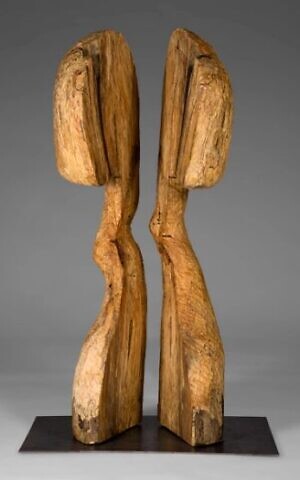 Shapiro’s rhetoric contrasts with his art. Unlike the smooth movement of his pieces, his sentences, sometimes phrases, are staccato and uttered in a heavy East Coast accent.

Shapiro was born at Mount Sinai Hospital in Manhattan and grew up on Long Island.

He had no interest in discussing his New York roots, though. Instead, he wanted to talk about his art, how it makes him feel and his upcoming show at ZYNKA Gallery in Sharpsburg, which runs from March 5 – April 30.

“The important thing is shedding and shining a light on antisemitism and how deeply-seated it is,” Shapiro said before sharing a passage from Jeffrey Veidlinger’s “In the Midst of Civilized Europe: The Pogroms of 1918–1921 and the Onset of the Holocaust.”

Shapiro, a Squirrel Hill resident who came here 30 years ago to compete on the University of Pittsburgh’s gymnastics team, said he feels close to the sculptures he’s displaying at ZYNKA. 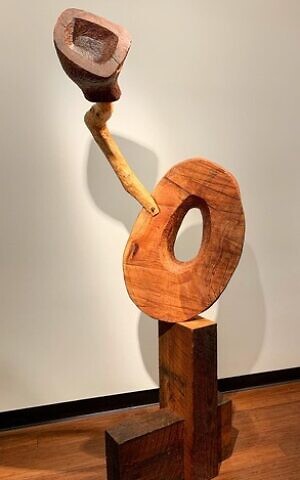 “They began like all my work does, with self-exploration, with who and why we are who we are, or why I am who I am,” he said.

The materials — in this case wood, but Shapiro also works with stone, steel and concrete — and their shape offer the artist a starting point.

What follows is an organic process of self-referential decisions, he explained.

In some of his pieces at the ZYNKA show Shapiro recognizes “deep-seated antisemitism through physical form.” He believes that people who have experienced trauma will have similar feelings, but said there’s no right or wrong way to interpret a piece. “It’s how you feel in that moment,” he said. He also sees “hope, perseverance, survival” in the pieces. 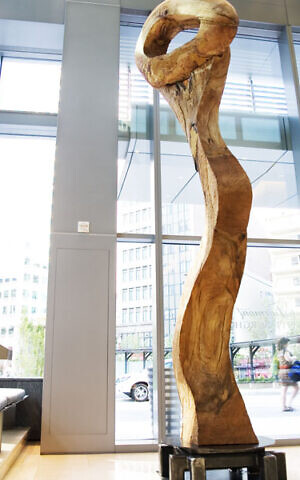 “Given to Nurture,” inside the Fairmont hotel. Photo courtesy of Jonathan Shapiro

Jeffrey Jarzynka, ZYNKA’s owner and director, called Shapiro a “good soul” and someone who “embeds his own personality and story within his work.”

Though the ZYNKA sculptures are not the first Shapiro works Jarzynka has seen — years ago Jarzynka admired a towering 15-foot wooden carving in the Fairmont hotel’s lobby, then later discovered the sculpture was made by Shapiro — the pieces inspired Jarzynka to learn more about the pogroms.

After Shapiro titled his newest works, “Shadows from the Pale,” Jarzynka learned how the sculptures pay deference to the Pale of Settlement — a territory within the western region of the Russian Empire where Jews were permitted to live from 1791 to 1917 — and how despite more than 100,000 Jews dying during early 20th-century pogroms there, Shapiro’s grandparents survived.

“Jonathan as a person and a figure is small in stature, yet has this powerful presence,” Jarzynka said. He pointed to the Fairmont piece, “which is powering and has mass but doesn’t feel weighty.” Viewing the piece, then looking at the artist, there’s “almost this mind-blowing moment like, ‘Wait, you created that?”

It takes strength to sculpt, the artist said. He practices yoga, plays pickleball and still has a set of rings and a pull-up bar. His pommel horse, he said, is at a friend’s house in Indiana. 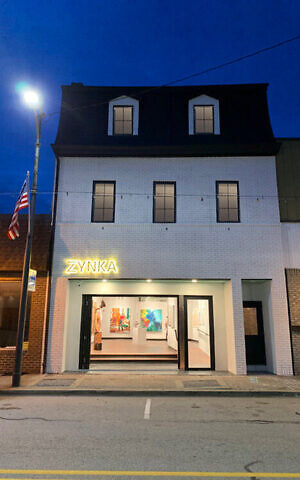 Shapiro never formally studied art. At Pitt, in addition to competing in gymnastics, he majored in rhetoric. Eventually, he taught himself how to sculpt. “I didn’t come from an academic art career,” he said. “I didn't have the critiques and discussion, how to talk about it. I communicate by putting these materials together in a way that feels right, that is my language of communication.”

Shapiro’s interest in art began at a young age. His maternal grandfather was a maker and Shapiro quickly grew comfortable operating various woodworking tools. Another early artistic influence came by way of a childhood poster: An image of Alexander Calder’s “Cirque Calder,” a 20th-century sculpture of a circus consisting of an elaborate troupe of miniature wire and wood figures.

“Cirque Calder," which is part of the permanent collection of the Whitney Museum in New York, achieved fame partially through Calder’s using the miniature pieces to demonstrate to a Parisian avant-garde audience how everything from the sword swallowers to spear throwers, lion tamers and acrobats all functioned.

Shapiro won’t be giving his ZYNKA audience that type of show, but the artist does see a captivating narrative within his sculptures’ twists and bends. Ingrained in the pieces are his worries about antisemitism, as well as his pride in being autodidactic and perseverant. “All the things that I got from my ancestors,” he said.

Ultimately, when it comes to this body of work, “it is who I am — self-taught, resourceful, creative — always been that way. We had to be that way as a people. We didn’t have a choice.” PJC