As he watched an uncaged animal slowly wander through the zoo, Dr. Jeremy Goodman paused.

Anytime something is awry within Pittsburgh’s 77-acre urban park — be it a desiccated tree, dislodged gate or outdated sign — Goodman, the Pittsburgh Zoo & PPG Aquarium’s new CEO, documents it with a photo. This time, however, as Goodman came closer to the animal, he didn’t need to reach for his phone. Instead, he marveled at the creature’s physical features, the splash of color running across its body, the sinuous way it moved.

Four-inch caterpillars aren’t what the Pittsburgh Zoo is necessarily known for, but seeing one crawling along the property’s cemented path reminds Goodman, 51, that even something as small as a caterpillar can excite a child just as much as “us having one of the only Philippine crocodiles in the world,” Goodman said.

Talking with Goodman — the Chronicle was invited to spend 90-minutes walking through the zoo with him — makes clear that he could very well be the “child” he speaks of. When explaining his role and hopes for the zoo, Goodman describes connections, inspirations and the feelings people — especially children — get when coming face-to-face with animals.

National Geographic and Animal Planet provide a certain level of education and entertainment, Goodman said, but neither comes close to “replicating the awe of seeing an animal in person.”

And, almost on cue — Goodman couldn’t have planned it better himself — a nearby stroller-bound child reached out and touched the glass barrier that a Komodo dragon was pressing itself against from the other side. 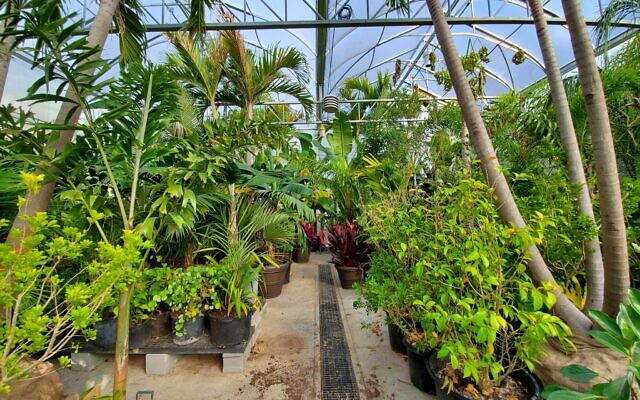 Apart from animals, the Pittsburgh Zoo & PPG Aquarium has a vast collection of plants, many of which were brought inside a greenhouse before the cold arrives. Photo by Adam Reinherz

Goodman has always had a passion for nature. As a small boy growing up in New Jersey, he was fascinated by animals. Not only would he go to his nearby library and devour any related book, but whenever his observant Jewish family took a vacation, he made sure it included a visit to the area’s closest zoo. At this point in his life, Goodman, a member of Congregation Shaare Torah, has been to hundreds of zoos. Pittsburgh’s is the third he’s overseen. Previously, he was executive director and CEO of the Roger Williams Park Zoo in Providence, Rhode Island, and director of the Turtle Back Zoo in West Orange, New Jersey. At each of his stops he’s been somewhat of an anomaly: When Goodman officially joined the Pittsburgh Zoo on Oct. 1, he was not only the eighth person to head the 123-year-old entity, but the first Orthodox Jew to do so.

Goodman makes clear that his faith is an important part of his identity. He wears a yarmulke to work, keeps kosher and avoids events, meetings and other professional responsibilities on the Sabbath. Even so, it’s a challenge. Saturdays are one of a zoo’s busiest days. But each employer has been accommodating, he said.

As opposed to working Saturdays, Goodman works most every Sunday, Christmas and holiday. Not that he minds. He said if he wasn’t observant he’d probably end up working seven days a week, so, “being forced to take a break is a blessing.”

Although Goodman studied animal science at Rutgers, the state university of New Jersey, and received his D.V.M. from Tufts University School of Veterinary Medicine, he always wanted to be an administrator.

“In my position I can make a much larger impact with some of the things I’m doing,” he said.

What exactly that means will be determined in the coming months and years, as the Pittsburgh Zoo is set to begin both a strategic and master plan to identify goals and determine which of its spaces need to be revisited, revamped or removed, Goodman said. 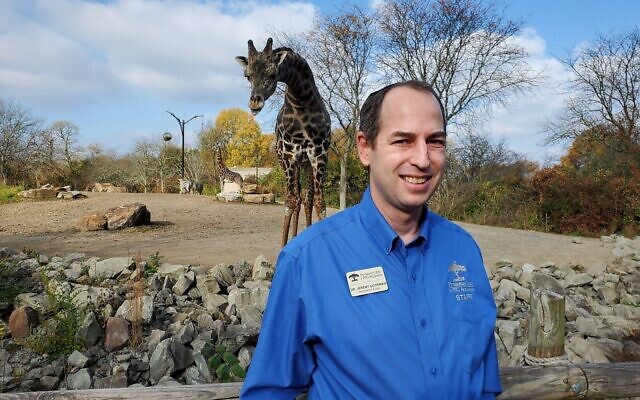 As the CEO walked past an area that sells pizza, ice cream and other refreshments, he noted that despite the Zoo’s largely outdoor setting, it isn’t immune from pandemic challenges. Like other employers, it was forced to make cuts early on and is now having difficulties filling open positions, such as cashiers, ticket takers and ride operators.

Even so, there’s work underway that signals a bright future, he said.

Goodman cited the Zoo’s Sea Turtle Second Chance program, and how the program nurses hatchlings and injured sea turtles until they’re healthy enough to be returned to the wild, as well as the Zoo’s International Conservation Center, a 1,000-acre facility, located in Somerset County, dedicated to African elephant conservation, education, training, breeding and research.

The challenge right now, Goodman explained, is getting people to care.

If zoos can strengthen their relationships with patrons, and inspire them to alter their attitudes and behaviors, “that will make the biggest difference,” he said. Whether supporters end up personally championing conservation efforts or electing officials who believe in safeguarding habitats and wildlife, those actions can lead to substantial change.

Goodman knows zoos can do more to empower their guests, and that begins, he said, with giving visitors a broader understanding of how the Pittsburgh Zoo operates.

“Nothing is too good for our animals,” he said.

Creating more transparency would also help people appreciate global conservation, its costs and why zoos can only do so much on their own.

“Conservation programs are expensive and don’t necessarily bring in any revenue,” Goodman said.

A 2016 paper in Stanford Social Innovation Review addressed similar concerns and suggested that in order to successfully fund these programs, wildlife conservationists should adopt private sector tactics, invest in innovative ventures that have conservation impact, and “start looking at conservation through the eyes of the public.”

Based on the numbers, that’s a lot of eyes. As of April 2021, the 218 accredited zoos nationwide received 183 million annual visitors — a number surpassing the annual attendance of the NFL, NBA, NHL and MLB combined — according to the Association of Zoos & Aquariums.

Goodman is also encouraged that zoos are not only reaching a large number of people, but those with means.

Goodman is optimistic about the numbers, but said there’s room for improvement. Last year, the Pittsburgh Zoo welcomed almost 1 million people, a nearly 17% jump in attendance during the past two years.

Attendance is increasing, but the budget remains tight, Goodman said.

The task ahead, Goodman said, is finding ways to facilitate better partnerships.

“As long as animal welfare is number one, and we treat our guests and staff like VIPs, I wouldn’t worry about other things,” he said. “Our zoo is really here for the community, to educate the community, to give the community a place to come together. And with the community’s support we will be capable of doing great things locally and around the globe.” PJC