Irwin Kotovsky, 91, packaged, stamped and mailed 535 envelopes, inspired by one aim: In honor of National Immigrants Day, which is Oct. 28, Kotovsky wants each member of Congress to remember this country’s history of welcoming immigrants and the contributions immigrants have made to bettering the republic.

“The United States is the country that it is because of the immigrants that have come here,” Kotovsky explained while seated inside his Brighton Heights office.

As a first-generation American — born to a Ukrainian father and Lithuanian mother — Kotovsky achieved the so-called American dream. After growing up in Greenfield, celebrating his bar mitzvah at Bnai Emunoh and completing studies at Allderdice High School and the University of Pittsburgh, Kotovsky founded Modular International, Inc., a custom lighting company. The Pittsburgh-based business collaborates with architects, interior designers and lighting consultants worldwide. The company employs nearly 30 people, according to online reports.

Achieving this type of success isn’t possible elsewhere, Kotovsky said, referencing Italy, Russia, Spain, Portugal, Finland and other countries he’s visited. “There's simple little things that we do here, that we take for granted, that you can't do in other places.”

Kotovsky described America’s “rules and regulations” regarding intellectual property as an example, and said the United States maintains a legitimate patent process that is absent in some other countries. 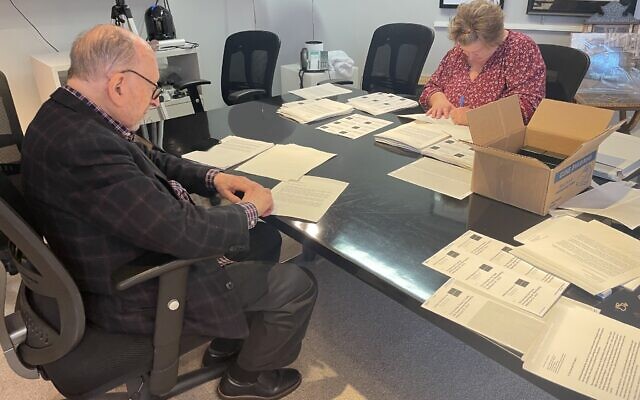 Within his letter to congressional members, Kotovsky wrote, “I hope you share my pride in belonging to a nation that has welcomed countless immigrants, granting them opportunities to apply their talents to the building of the culture and economy of the United States.

“All of the talented men and women in our Pittsburgh-based company are sons, daughters, grandchildren, and great-grandchildren of immigrants to this city, which is famously powered by ethnic diversity,” he added.

Along with a personally signed letter, Kotovsky included a special half-dollar coin. Struck between Oct. 18, 1985 and 1986, the 50-cent piece was “authorized in commemoration of the centennial of the Statue of Liberty,” and features iconic images of a ship “steaming into New York harbor” and “an immigrant family with their belongings on the threshold of America,” according to the United States Mint.

The coin’s embossed images are symbolic, but the words pressed upon it are what resonates most for Kotovsky, he said. Inscribed above the picture of the family is text reading “United States of America” and “A Nation of Immigrants.”

Despite investing multiple hours drafting and revising his letter, packaging hundreds of envelopes and spending $2,240.25 to mail 535 packages, Kotovsky doesn’t expect a single reply. He said his goal is neither policy change nor legislative action. Instead, he merely wishes to remind recipients of his gift of this country’s values and the contributions immigrants have made.

“You and your colleagues are entrusted with the hopes of all those born here and abroad who now work eagerly to preserve and expand the freedoms that are the core of the American dream,” he wrote. “On National Immigrants Day and every day, I take pride in thanking you for the work you do to help those dreams come true.” PJC