Looking back on the past year, the promise of distant planets may be all some stargazers are seeking

By Adam Reinherz 14 December 2020, 3:15 pm 0 Edit
Main image by Smart-Photography. This beautiful Milky Way Time lapse was filmed close tho the Neusiedlersee in Austria. It was a phenomenal night capturing the Milky Way, Jupiter, Saturn and another phenomenon the glowing clouds

With days remaining on the calendar, the singularity of 2020 continues: Next week, Jupiter and Saturn will be observable in a way that they haven’t been for almost 800 years. For the first time since March 4, 1226, people will be able to see the two planets form what astronomers are calling a “Great Conjunction.”

A conjunction occurs when planets or celestial objects appear close to each other in the sky, but the Dec. 21 great conjunction between Jupiter and Saturn is a rarer type of event, explained Jeffrey Newman, professor of physics and astronomy at University of Pittsburgh.

Because Jupiter and Saturn — the last two planets that humans can see with the naked eye — possess larger orbital paths, a conjunction between those planets is unique, said Newman.

The process is similar to what happens when two marbles run on tracks of different sizes, explained Scott Dodelson, a professor of physics and department head at Carnegie Mellon University.

The uniqueness of next week’s great conjunction is due not only to Jupiter and Saturn’s closeness but their orbital tilt, explained Newman.

In addition to the two planets heading along a two-dimensional plane, they’re also slightly oscillating up and down, so for Jupiter and Saturn to line up like this is pretty historic, said Dodelson.

The last time Jupiter and Saturn appeared this close, and with a similar orbital tilt, was March 4, 1226, according to Rice University researchers.

Although the two planets will reach their closest point on Dec. 21, viewers were able to see Jupiter, Saturn and even the new moon as early as Dec. 15. But while the two planets may appear close — they will be 0.1 degree from one another — Jupiter and Saturn will actually rest almost 450 million miles apart, according to NASA’s Night Sky Network. 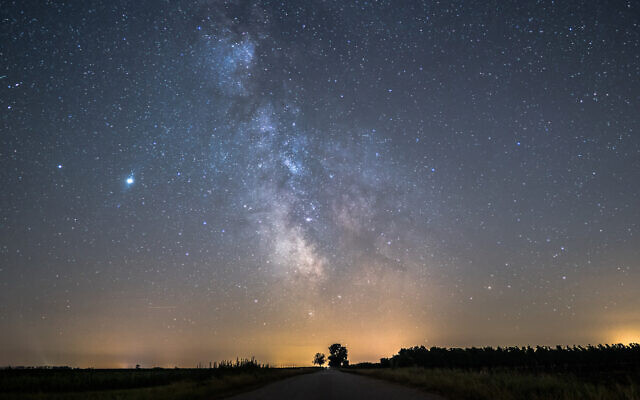 This beautiful Milky Way Time lapse was filmed close tho the Neusiedlersee in Austria. It was a phenomenal night capturing the Milky Way, Jupiter, Saturn and another phenomenon the glowing clouds. Photo by Smart-Photography

Gayle Rieger, a member of the Amateur Astronomers Association of Pittsburgh, is looking forward to next week’s conjunction but wishes it didn’t coincide with the pandemic.

Were it not for COVID-19, Rieger would have enjoyed observing the night sky with friends from the AAAPGH, she said. “It’s almost like a family.” Between meetings and “star parties,” members get together twice a month “and sometimes even more.”

The pandemic has restricted the group’s ability to gather in recent months, which is a shame because 2020 would have been “a fabulous year for star parties,” given the various conjunctions that recently occurred, said Rieger.

Since the beginning of March, there have been six instances of planetary conjunctions.

For better conditions, Rieger suggested traveling “out in the country.”

Newman agreed that there’s a general value in viewing the sky from a “truly dark site,” like Pennsylvania’s Cherry Springs State Park, which is about 180 miles northeast of Pittsburgh, but said that city dwellers shouldn’t be at too much of a disadvantage if they choose to observe the great conjunction from home.

“It won't be quite as dramatically bright in Pittsburgh as it would be at a dark site, but both Jupiter and Saturn are bright enough that if it's clear you can see them easily with the unaided eye,” he said. And, as an added benefit, if one uses a telescope, or even binoculars, to observe the event, there’s a good chance of seeing not only Jupiter and Saturn together, “but also the moons of Jupiter, and perhaps even the largest moon of Saturn: Titan.” PJC