Behind every work of art created by Oreen Cohen, a partner at Pittsburgh’s OOA Designs LLC, is the voice of her mother fused with the influence of Israel.

Long before Cohen graduated from the University at Buffalo and then Carnegie Mellon University — where her master’s work included an allegorical film involving the burial of a gilded casket filled with sunflower seeds in Braddock, Pennsylvania — her Sephardic Israeli-Moroccan mother would utter short Hebrew aphorisms. Sometimes her mother would say, “moach v’lo koach,” which translates to “brains and not strength,” or “aph echad lo ya’aseh li kever shel zahav,” which means “no one will build me a casket of gold.”

Growing up in Rochester, New York, to bilingual parents, those maxims resonated with Cohen, and as she matured, she continued tapping them for meaning — like when classmates considered her to be brutish because she was a woman who worked with metal.

“I’d be scrapping and pulling things from dumps, and when I was in those situations dragging some heavy piece of metal out of a ravine ‘moach v’lo koach’ brought me back to my body and my mind,” Cohen, 35, recalled. “I’d think more cautiously about how to approach something — not just even how to pull this thing out of the ravine, but to people and places and to finding an approach to things.” 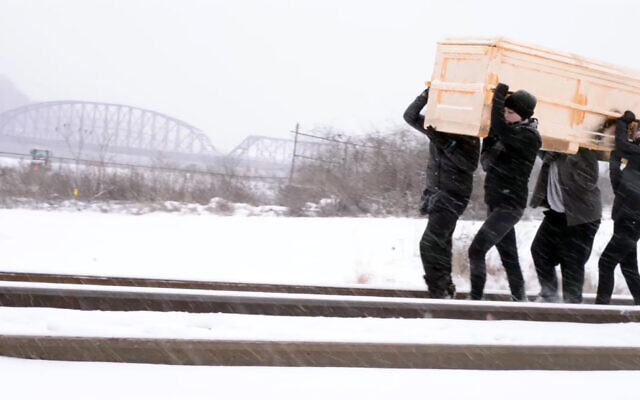 Between a Stone and a Shrine Video Performance. Still image, 2014, courtesy of Oreen Cohen

The idea that “no one will build me a casket of gold” reinforces the notion that as an artist, “you work to leave your own legacy,” said Cohen. “You’re working for yourself and by doing so you are creating your imprint on the environment and people around you.”

In addition to her mother’s words, traveling to Israel each summer with her parents until the age of 14 also helped forge the artist’s identity. She fondly remembers the details of those trips: How they often occurred before the school year officially ended; how she carried her American school work in tow; and how the days were spent at her aunt’s moshav, Merhavia, near Afula in northern Israel. There, she watched her uncle, a mechanic, toil away with discarded pieces of metal, and build his own tractors — a “huge influence on my artwork,” Cohen said.

More than a decade after the last summer trip, in 2014 Cohen honored her uncle’s expertise by taking steel, HVAC pipes, a Fresnel lens, satellite dishes, mirrors, tires, auto glass, resin, reflective tape, bearings and a steel turntable, and crafting a sculpture titled, “A Sharper Lens.” The piece, which debuted at Governors Island, in New York City, and alluded to the site’s military history, represented a battle between an artillery cannon and an Iron Dome. Through the use of kinetic kaleidoscopes, “A Sharper Lens” allowed visitors to “engage in a battle of perceptions,” said Cohen. 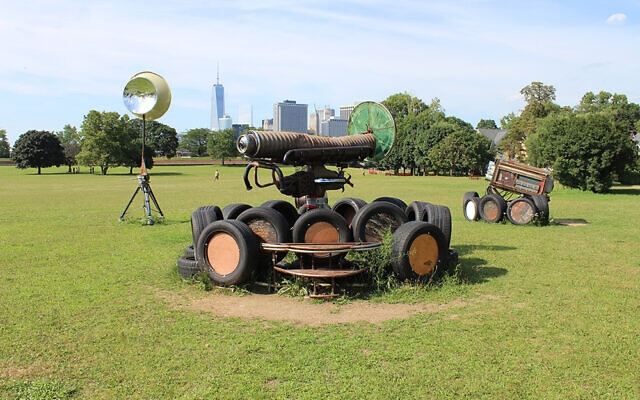 “A Sharper Lens,” 2014. Photo courtesy of Oreen Cohen via oreencohen.com

It’s been seven years since Cohen displayed that piece, and during that time has she branched into other media, helped various nonprofits develop youth programming and partnered with Pittsburgh-based visual artist and educator Alison Zapata to create OOA Designs LLC, which specializes in creating site-specific public and private art commissions.

In 2018, OOA Designs’ big break arrived when the group was selected to redevelop Wightman Park in Squirrel Hill.

In creating four pieces for the project, Cohen and Zapata were inspired by the park’s environmental efforts — its introduction of various plants to aid pollination and facilitate water retention, and the placement of tanks underground to collect stormwater — as well as its history. Years earlier, Wightman Park was home to the Lorenz & Wightman Glass manufacturers. 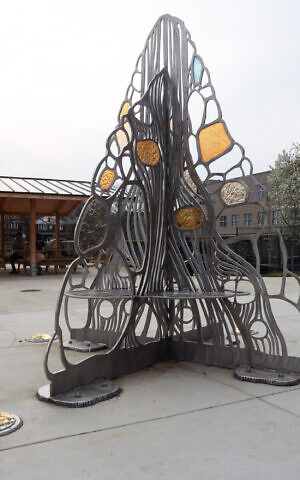 OOA Designs bridged two elements — steel and glass — said Cohen, as a nod to Pittsburgh’s past and to honor the 11 Jewish Pittsburghers murdered on Oct. 27, 2018, as there are 11 pieces of glass within the park’s main sculpture.

“As a Jewish artist I was very impacted by that event, and we wanted to commemorate it,” she said.

In addition to working on private commissions, OOA Designs was recently selected to participate in the City of Pittsburgh’s Art in Parks program — the permanent piece will be installed at Emerald View Park near Mt. Washington prior to Summer 2022.

“Dae” is Korean for greatness, Cohen said, And the second part of her first name “ora,” Hebrew for light, “was the name of my aunt who died who was also an artist.” The middle name, “Esh,” means fire in Hebrew.

By melding Korean and Hebrew words, Daeora Esh’s name is infused with meaning, like all of Cohen’s creations. Said the artist, “Her name is ‘great light fire,’ and she is definitely the greatest light in my life.” PJC