Pittsburgh Jewish professional Kate Kim brings an international perspective to her local work. The former assistant director of the Joint Jewish Education Program of Pittsburgh and current director of marketing and communications at Rodef Shalom Congregation credited her years living in Thailand and South Korea with helping her understand the importance of finding community.

Kim, 36, is enmeshed in Pittsburgh Jewish life, but reaching this point, she said, involved a “long and winding journey.”

After graduating from George Washington University with a degree in international affairs concurrent to the 2008 financial crisis, Kim decided to live abroad.

She ventured to Thailand and earned her TEFL certification — an internationally recognized professional credential that certifies an individual to teach English as a foreign language —
while teaching English to communities affected by the 2004 tsunami.

“A lot of these adults there worked in the tourism industry and realized they needed a certain amount of English in their repertoire to be able to communicate with tourists in the event of an emergency,” Kim said of her students.

She eventually moved back to Washington, D.C., and took a job helping elementary through high school students travel throughout the United States and overseas on educational trips.

The work was engaging, but Kim had already been “bit by the travel bug” and decided to again move abroad, she said.

She headed to South Korea and taught English to preschool and kindergarten students. While in South Korea, she met her future husband. In 2015, the couple decided to return to the States. They came to Pittsburgh because Kim had family here. 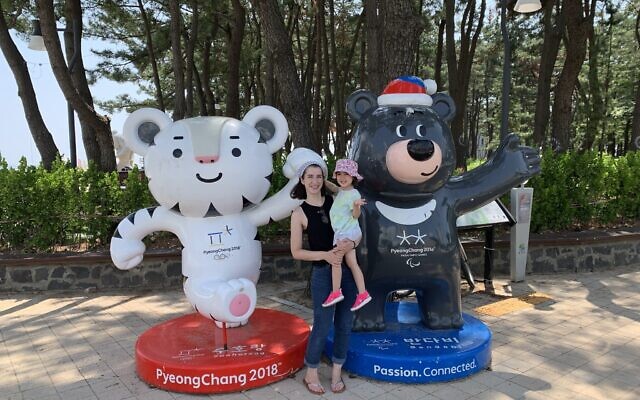 Working at JJEP allowed Kim to use her educational insights and also perform administrative duties, such as partnering with congregational representatives and supporting a group of about 15 part-time teachers and scores of families.

“Our message is there are lots of ways to be Jewish, and we’re here to teach,” she said. “We’re not here to teach a dominant denomination. We’re here to present everything — Judaism in all its spectra — and then it’s up to you to create your Jewish experience from that and to find what’s meaningful.”

Kim cited the school’s approach to educating students about kashrut as evidence of its desire to introduce students to an array of Jewish thought and practice.

“A lot of our families don’t keep kosher, and that’s OK; we’re just here to present the whole gamut of what is out there Jewishly,” she said.

What’s helped JJEP succeed — the school has approximately 130 students and recently expanded from grades K-8 to include high school offerings — is that rabbis from both Beth Shalom, a Conservative congregation, and Rodef Shalom, a Reform congregation, believe in the mission “and care about that experience for their families,” Kim said.

As the mother of a young daughter, Kim said she understands the value congregational life adds to families. She hopes to share that sense with other young adults through her new role at Rodef Shalom. As director of marketing and communications, she will help the Shadyside-based congregation share its story.

Rodef Shalom already does a great job communicating its history, Kim said, but it could use a little more help telling the community about the abundant programming that’s available to young families.
The reason why it’s important to share this information and keep families in the synagogue system is because “our kids are really the future of our congregation,” she continued. “We want to make sure that the kids and their families are getting what they need from our communities, that they’re getting involved and that they stay with us because they’re the ones who make our congregation.”

“I hadn’t been a member anywhere as a young adult, and it wasn’t till I had my kid and I realized that it’s up to us to pass this on,” she said.

While synagogue affiliation may help individuals experience and transmit the importance of Judaism, there’s also a collective benefit, she explained.

“You can’t do it alone. You can’t do it in a vacuum. It’s really hard to make your kids see how important this is,” Kim said. “It takes a village to raise a child. And the one thing about joining a congregation — I belong to two now — is that it gives you community.”

Although some find their place within the Jewish fold without congregational membership, Kim said she isn’t one of those individuals: “The first friends I made in Pittsburgh were through Rodef Shalom and Beth Shalom.”

Kim wants to help the community understand how much Jewish Pittsburgh and its congregations offer.

“You just have to take that first step of walking in the door or calling us, and we’re ready to connect with you,” she said. “There’s so many special people and programs to find in these places. And I hope that everyone can find something to connect to here because it’s really a valuable experience when you walk into these buildings.” PJC