Farkas’ efforts, like caramel shards atop yeasted cake, are the finishing touches in a collective process. Pre-pandemic, video editors like Farkas, may have sat alongside producers or other creatives while paring down clips for a program like “The Great British Baking Show.” These days, however, work is mostly performed at home or in largely isolated spaces.

There is still collaboration, though — along with some silver linings in the ways people now must interact — but on the whole the process is different, Farkas said.

Most of Farkas’ work now concerns remote conferences for companies and other organizations, animating text or shapes that provide viewers an optimal virtual experience. The products have a different feel than a series promo for PBS’ “Beyond a Year in Space,” but the objective, and requisite skill set, is similar.

With each project, the goal is providing an emotional charge, explained Farkas, so whether it’s compressing Scott Kelly’s year aboard the International Space Station into 30 riveting seconds or determining how many between-scene sparkles to include in a spot for “Once Upon a Sesame Street Christmas,” the decisions require technical and aesthetic expertise.

Farkas studied film and video at Penn State University, but their interest in the art goes back further: “I started editing when I was 13 on a computer I got with my bat mitzvah money — turned out to be quite the investment in my future,” Farkas said.

After graduating Penn State in 2011, Farkas interned with the Altoona Curve, a Double-A affiliate of the Pittsburgh Pirates and learned Adobe After Effects, an application used in filmmaking and television production. Following Altoona, the Pittsburgh resident worked on independent and studio films, both on set and in post-production.

“Overall, it sounds much cooler than it was, but I did get to see Tom Cruise and Werner Herzog in person,” said Farkas.

In 2012, Farkas began a more than six-year tenure with Interface Media Group, a post-production house in Washington, D.C. One of the highlights of that job was “seeing a wide variety of work,” said Farkas, 31.

Between making videos for government organizations or politicians, and working with clients including PBS and National Geographic, “it allowed for a really broad range of experiences.”

“The editor is the person who brings all the pieces together,” said Farkas. It’s the last step in the process, and requires someone who can work with the blueprint, script and graphic elements and “take all of those pieces and put them into something cohesive.” 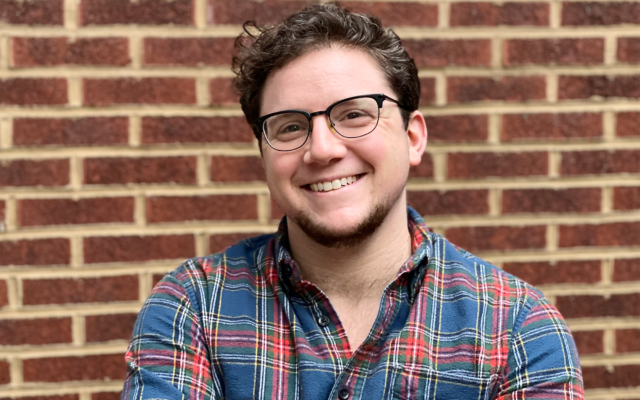 Near the end of 2018, Farkas and their wife returned to Pittsburgh to be closer to family. Coming home began a stretch as a freelancer, which continues today.

At first, finding clients was challenging — people were more inclined to rely on those who worked in-house — but the pandemic altered the landscape in some ways. With so many people working remotely, clients cared less about whether someone was located in New York City, Washington, D.C., or even Pittsburgh.

In recent months, Farkas has reconnected and collaborated with former colleagues, some of whom are now scattered across the Midwest. Moving forward, however, Farkas is hoping to develop closer connections in the Pittsburgh area — and in doing so, bring their work full circle.

As a child, Farkas and their “bubie” spent hours watching PBS programs including “Lamb Chop's Play-Along” and “Mr. Rogers’ Neighborhood.”

“I would sit in front of the TV and my bubie would tell me to move back,” said Farkas.

As an adult, when the opportunity arose to work with PBS, “it was one of the coolest and greatest experiences of my career,” said Farkas. “I believe in their mission and their programming, so getting to work with the people who also believe so strongly in their programs and mission was really cool.”

While working for PBS again would be great, Farkas is now focusing on growing a list of local collaborators, a lesson familiar to generations of PBS viewers.

“I see video creation as a communal experience,” said Farkas. “And it’s all the more rewarding when you do it with people who are your neighbors.” PJC