Days after the March 2020 shutdown began in Pennsylvania, Kesher Pittsburgh and the 10.27 Healing Partnership hosted a Zentangle Zoom room where guests could explore Judaism through meditative doodling.

“The program was a way to help people learn a new skill that would support resilience through spiritual and creative practice,” said Kesher Pittsburgh’s Kohenet Keshira haLev Fife.

By drawing structured patterns, or “tangling,” Zentangle “allowed us to connect and learn together while sheltering-in-place in those early days of the pandemic.”

Developed in 2003 by Rick Roberts and Maria Thomas, Zentangle bridges meditation and art. Practitioners combine dots, lines, simple curves, S-curves and orbs on small pieces of paper called “tiles,” which can then be arranged into mosaics.

Forest Hills resident Sue Schneider first learned about Zentangle in 2012 at a local library. Schneider enjoyed the creative exercise so much that she continued meeting with classmates at The Galleria of Mt. Lebanon. Before long, the group developed a following, outgrew its space at The Galleria and moved to the Mt. Lebanon Public Library. By that time, Schneider, whose background is in art education, was hooked. In 2013, she traveled to Massachusetts, enrolled in a comprehensive seminar and became a certified Zentangle teacher. 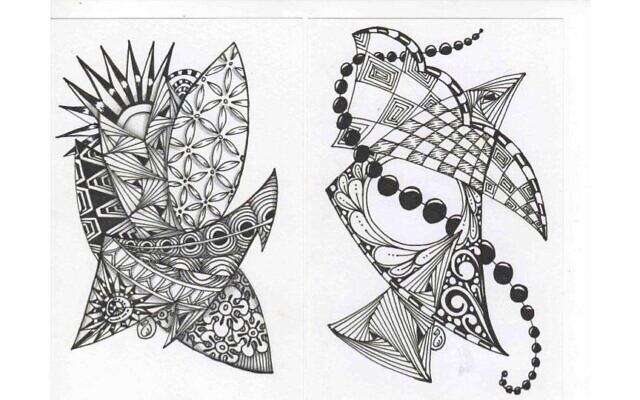 Highland Park resident Deborah Ganz Corsini began studying with Schneider in 2014 at the former Gilda’s Club Western Pennsylvania, months after Corsini’s husband died of cancer. “After he passed away I tried to reach out to the cancer support groups,” said Corsini. “I was kind of drawn to anything that was kind of artsy. I was looking for a safe place to connect with others.”

Corsini was immediately engaged by Schneider’s teaching style, and during that first lesson she followed Schneider’s guidance for almost two hours.

“Whatever you’re carrying when you come to class, put it out in the hall,” said Schneider. “You’re going to take a break, a rest, and you’re going to explore and make something that has never existed before in the world. And when you’re done with that time of concentration and focus, you can go back in the hall. Your bag and stuff is still there, but you are renewed and rested, and you can go on with the rest of your day.”

Corsini continued taking Schneider’s classes and was amazed at what she saw: men, suffering from cancer, who, despite no history of artistic practice, created incredible designs; women, unsure of their own prognoses, able to detach and develop breathtaking pieces.

There’s a relaxing quality to Zentangle, said Corsini. “It’s a nice escape from the outside world of phones and technology. And it can be done in minutes.” 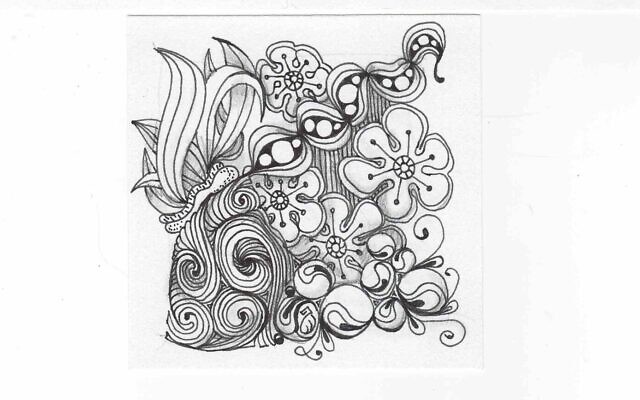 Zentangling begins with a 3.5-inch square of museum grade cotton paper, according Zentangle creators Roberts and Thomas. After a border is designed, a sequence of simple pen strokes is used to make a pattern. A graphite pencil or tortillon — a cylindrical drawing tool — is then used for shading. Finally, the piece is initialed and signed by its creator.

Carlisle resident Leah Levinstein said a completed work can take her as little as 15 minutes or as long as a week, depending on shading. She began tangling six years ago after discovering a pattern online, then enrolled in a class at a local library. In 2015, she became a certified Zentangle teacher.

“I really value the process, the meditative support, Zentangle gives me,” said Levinstein. “I love the concept of meditation, but I’ve struggled to do it traditionally. Somehow, for me, the act of having something to do with my hands allows me to get to that place of deep relaxation.”

She has also seen Zentanlge’s positive impact on others.

Months after she received her certification, her brother was hospitalized. He’d been experiencing paranoid delusions and was later diagnosed with schizoaffective disorder.

When Levinstein, who was living in Akron at the time, visited him in the hospital, she brought a Zentangle kit.

“I had never been to a psych ward — there are metal detectors — and I was concerned they wouldn’t let me bring it in because the pen was sharp,” she said.

Levinstein was permitted to enter with her tools. She walked down a long hallway before reaching a vacuous space, empty except for some tables, chairs and an ice machine.

Levinstein sat down with her brother, who was visibly upset and told her he thought that the people there were poisoning him. She took out her pen, paper and pencil and asked if he wanted to try drawing. Step-by-step, the siblings worked through a piece. After 40 minutes, her brother’s agitation had eased.

“It was a really powerful moment,” said Levinstein. “It showed me how many applications and possibilities this method had to heal and to connect and to slow people’s brains down in a healthy way.”

Levinstein visited her brother a second time, and once again brought a Zentangle kit. This time, each sibling worked on a separate tile, occasionally swapping papers as they drew.

In 2017, Levinstein’s brother died by suicide. In the process of cleaning his room, their sibling, Sam, discovered a Zentangle kit and collections of small pieces left behind, including the drawings that he and Levinstein had worked on together. 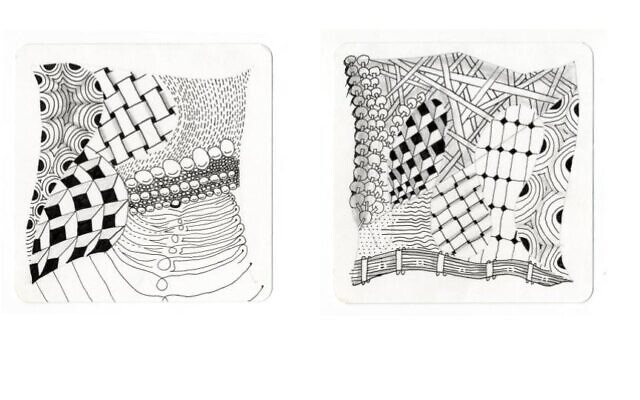 In the years since her brother’s death, Levinstein has observed, time and again, the benefits of tangling.

Once, while attending her daughter’s ballet recital, Levinstein’s 7-year-old son began experiencing symptoms related to his emotional dysregulation. She took him out to sit in the hall, but he continued screaming, she recalled, so she pulled a pen and paper from her bag and the parent and child drew together for 15 minutes.

“I watched the same thing happen to him which happened to my brother,” she said. “He was able to move from a place of extreme agitation to a place of calm very quickly.”

Levinstein — who years after that incident led Kesher Pittsburgh’s Zentangle Zoom room — said the benefit of structured drawing went beyond calming her son during a period of distress.

In the end, she said, “he had something which he was very proud of.” PJC