The project, which Eli completed as a lead-up to his Feb. 19 bar mitzvah at Temple Sinai, was partly inspired by his own family’s story.

Eli’s great-grandparents were immigrants and, along with acknowledging their journey toward creating a new life in the United States, the teenager wanted to support other families facing similar challenges. With the guidance of his mother, Jessica Olifson, Eli was directed to Hello Neighbor, a Pittsburgh-based nonprofit working to improve the lives of recently resettled refugee and immigrant families.

Hello Neighbor was a good fit, given its local ties and smaller size, Jessica Olifson said.

Founded in 2017 by Pittsburgh native Sloane Davidson, the nonprofit helps refugees who have come to Pittsburgh find housing, receive access to food and acquire support for social services.

Eli said he knew the work of Hello Neighbor’s 19 staffers was critical after reading several stories about the difficulties Afghan refugees are facing.

With 2.6 million registered Afghan refugees around the world, and another 3.5 million internally displaced throughout Afghanistan, “the number of people fleeing will likely continue to rise,” according to the UN Refugee Agency.

When Eli began learning about the plight of Afghan refugees months ago, he decided that a bake sale would be the perfect bar mitzvah project to support Hello Neighbor’s work. Eli, then 12, enjoyed baking, had grown up with certain cherished recipes and already had a family cookbook. Eli selected five of his grandmother’s recipes and added a sixth for good measure. He then baked each of the six items and took pictures of his creations. With the help of his father, Alan Olifson, Eli created a website where people could place orders for blueberry muffins, ginger snaps, banana bread mini loaves, lemon squares, triple chocolate cookies and fudgy brownies. 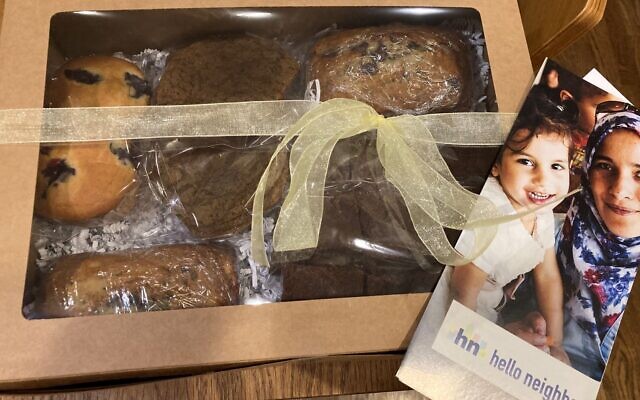 The orders soon started rolling in. Friends and family members, even some from out of town, began requesting Eli’s treats. What Eli initially thought would be a small undertaking became a time-consuming endeavor. He spent weekends mixing, baking, packaging and delivering; out-of-town orders were shipped.

Fortunately, the project occurred during late fall and didn’t overlap too much with baseball, Jessica Olifson said. The sport and cello — Eli is on book four of the Suzuki method — are among his many interests.

“Eli is an extraordinary young man,” Temple Sinai Rabbi Daniel Fellman said. “He is bright and engaging and, even more, he understands his obligation and his ability to help make the world better.”

Hello Neighbor’s founder and CEO Sloane Davidson agreed, saying, “As a native Pittsburgher, and as a kid who grew up volunteering and always involved in my community, seeing the way that Eli has stepped up to support his refugee and immigrant neighbors is so inspiring. We have a lot to learn from the spirit of giving that Eli has cultivated, and I'm so thrilled to see his contributions being recognized.”

Eli said he’s happy that his 156 ginger snaps, 90 blueberry muffins, 52 banana bread mini loaves, 151 lemon squares, 189 triple chocolate cookies and 176 fudgy brownies have made a difference. Selling those items raised more than $2,900, with 100% of the proceeds going to Hello Neighbor.

Jessica said she learned a lot by watching her son take on such a sizable project amid managing school, extracurriculars and an upcoming bar mitzvah all during a pandemic.

“It showed me a great example of how kids can have a big impact when there are certain limitations,” she said.

Eli said he’s pleased with the project’s results and what he’s discovered.

“I’m inspired to bake more,” he said, “but definitely not that many recipes in a day.” PJC