Growing up, Steffi Biersdorff didn’t know her father. She remembers attending community functions in Oregon with her family and asking relatives for details about her father’s identity but never got any answers.

Time passed and Biersdorff remained curious, but whenever she’d ask her mother or maternal grandmother for information, none was provided. At the end of elementary school, Biersdorff finally got her answer — thanks to a swab.

“Before my mom could get child support from him, I had to go through that testing,” she recalled.

When Biersdorff became a teenager she was at risk of entering the foster system. Her mother and maternal grandmother were no longer able to care for her, so she ended up moving in with her biological father. Despite living together, though, her father didn’t share details about his family — he’d been estranged from them for years, Biersdorff said.

After high school, Biersdorff — who was raised as an orthodox Mormon — enrolled at Brigham Young University in Provo, Utah. During a genealogy course, she took an ancestry test.

The results were shocking, she said.

“It came back mostly Ashkenazi Jewish, and I'm like, ‘That's impossible.’”

Ever since childhood, Biersdorff believed she was Norwegian. Her mother took a similar DNA test. The results didn’t indicate any Ashkenazi heritage. Biersdorff called her father and asked him if he was Jewish. He said he didn't know and that Biersdorff should call his mother.

“I didn’t know his mom at all,” Biersdorff said, “but I contacted my grandma and that call changed my life.”

Despite her grandmother’s unwillingness to connect, Biersdorff nonetheless remained interested in her family history. The ancestry test she took didn’t just spur a patrilineal quest for answers but one involving her maternal lineage as well. The DNA test Biersdorff’s mother took revealed that she also didn’t know her biological father’s identity.

“I went from thinking I knew who I was, to it turns out I wasn't who I thought I was, and half of my family turns out wasn't my family because my mom also had a non- paternal event,” Biersdorff said.

For the former Oregonian, as difficult as it was piecing together this heritage, moving forward was also challenging. In addition to worrying about the genetic history she’d caused family members to uncover, school became increasingly difficult.

“I felt like I had to hide another part of myself,” Biersdorff said.

Biersdorff pointed to BYU’s honor code, and said life at the university became cumbersome when she started “having doubts with the church.”

“I knew I had to leave,” she said of her membership in the church. “One, I didn't believe it anymore, and two, it was like that whole string on my ribcage saying, ‘OK, come home now Steffi, it's time to come home.’”

Biersdorff, though, was afraid of the repercussions.

“By embracing my Jewish heritage, I could have been kicked out of school. I would have been seen as an apostate,” she said. “I felt split at the root.” 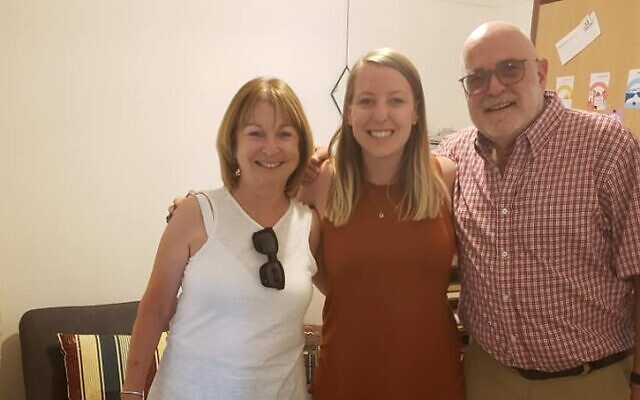 Biersdorff graduated from BYU in 2015 with a degree in horticulture. She moved to Pittsburgh and pursued a master’s in food studies and food politics at Chatham University. She also started frequenting Shabbat services at Temple Sinai.

She remembers hearing the Hebrew phrase “l’dor v’dor” (from generation to generation) during the first service she attended and how much pride she felt “being part of a tribe that goes back thousands of years,” she said.

Biersdorff told her paternal grandmother about the experience. Her grandmother finally opened up about her Jewish history: how she grew up in Chicago, made challah with her mother and the antisemitism endured during those years.

Biersdorff and her paternal grandmother developed a bond, which made it even more difficult when the older woman died a week after Biersdorff visited the mikvah: “I had a hard time with my Judaism at that point because everything reminded me of her,” she said.

She began dating a Jewish man; they are now engaged.

On the day Biersdorff, 31, spoke with the Chronicle, she was preparing to fly back to Oregon and visit relatives on her father’s side.

The hardest part of discovering her Judaism as an adult, Biersdorff said, is feeling like she missed out on various life cycle events.

“You see people who have been bar or bat mitzvahed, or there’s a baby-naming ceremony, and I kind of felt robbed of all those things,” she said. “I truly feel like I'm trying to make up for lost time.” PJC

This is the first in a series of stories about people who have discovered their Judaism later in life. If you or anyone you know would like to be featured in a future piece, please contact Adam Reinherz at areinherz@pittsburghjewishchronicle.org.