Armed with a surplus of brightly colored chalk and a stretch of well-traversed pavement, Frischman, a middle school teacher at Community Day School, scrawled problems out across the sidewalk on Beechwood Boulevard in Squirrel Hill.

With each problem, she noticed a pattern: People stopped, tried to solve the equation and, better yet, said Frischman, began all sorts of conversations — even ones that had nothing to do with math.

Eight months later, Frischman is still at it.

Her chalk problems, which are “fun, easy and not too mathy,” have been a nice way of safely bringing people together, she said, especially in these days of social distancing.

For example, she recently etched a two-by-two grid, with one letter placed inside each of the four boxes: h, f, c and e.

Passersby were instructed to identify the letter that didn’t belong.

“With a problem like this, people don’t realize they’re doing math, but they are,” said Frischman. “They’re problem solving. They’re organizing. They’re generalizing.”

Deductive reasoning is very much a mathematical process, and working through the chalked prompts can help boost confidence.

“Maybe they aren’t comfortable or confident, but I think these problems have helped them gain confidence and comfort with math problems.”

Months before Frischman etched her first equation on concrete, she traveled to Boston for a math conference. During one of the sessions, she heard a presentation about outdoor mathematics from a Canadian professor.

“We walked around the streets of Boston and found symmetry and shapes and did all kinds of activities,” said Frischman.

In addition to identifying mathematical concepts in nearby spaces, the presenter suggested sidewalk math as a means of enabling critical skill development. 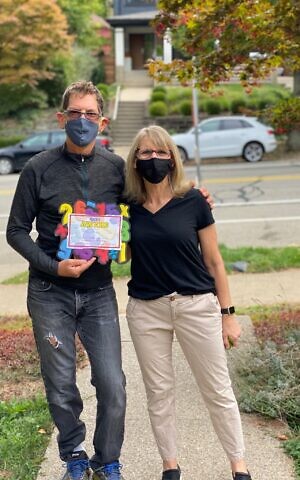 Frischman returned home and began teaching again at CDS. Shortly thereafter, the pandemic hit, and she and her colleagues were forced to recreate their classrooms online. Frischman remembered the presentation in Boston and, for fun, started etching problems on the sidewalk. As weeks passed, more people noticed her efforts.

While walking his dog, Squirrel Hill resident Steve Finkel came across one of Frischman’s designs. He gave it some thought and sent her the answer.

To Finkel’s amazement, Frischman replied not only with a congratulatory message but a handmade certificate. The two Squirrel Hill residents even took a photograph together.

“I was beaming with pride,” said Finkel.

Part of the benefit of Frischman’s sidewalk math is that it’s “fun to engage in the puzzles,” Finkel said. “It’s also a great diversion from the terrible daily news we’re all facing.”

Working beside Frischman, who is the 2019 Pennsylvania Council of Teachers of Mathematics Middle School Teacher of the Year, is a privilege, continued Minkus: “Her sidewalk math project is very much in character for a teacher who does things like the Metric Olympics, Bungee Barbie and our annual Pi Day celebration.”

Since March, Frischman has written almost 50 problems on the sidewalk. And she is committed to continuing.

“I just got a whole new box with 60 pieces of chalk,” Frischman said. “As long as the weather holds up I’ll try and keep doing it.” PJC